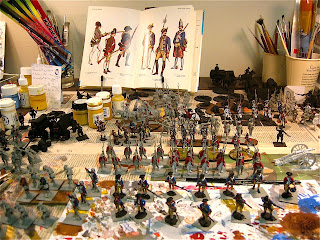 Thing are quite a mess on my painting table - it feels as if Burnham Wood is closing in on me. Fife & Drum Continentals are in the foreground and the Guards Brigade figures in red are behind them. The black bits to the left are Front Rank wagons in primer. A nifty Eureka French 8-pdr is seen on the right.

I am almost ashamed to show you the mess that is on my painting table this evening. It is hardly in tip top Bristol Shape, as you can tell. Several weeks ago, I had cleared things off and made the surface a bit more tidy. However, like MacBeth watching Burnham Wood gradually creep closer and closer, so too do various bits and pieces of partially painted figures start to clog things up.

In the center of the table, you can see the Fife & Drum Continental firing line regiment that I am working on. The dozen uniformed figures in the center are nearly completed and I will shortly start to work on the militia figures to their right. I plan to include the militia in the regiment in order to depict new recruits who did not yet get uniforms or other bits of equipment.

Behind the Continentals, you may spot the red coated beginnings of my Brigade of Guards. The strength of this unit at Brandywine was around 800-900 men. At a 1:10 ratio of figures to men, that would translate to 80 or 90 figures. Yikes! The plan is to paint that many, but then divide them into two "wings" as the regiment likely was in practice.

Off in the distance, one might spot some black Front Rank 18th Century wagons that have been primed and are awaiting a coat of Austrian yellow ochre paint for my SYW Austrian army. Behind them are some casualty stands in black primer, mounted on 1-inch diameter circles. There is a lot going on at the table. 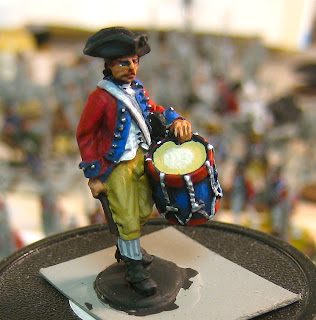 Above you can see a close up of a Fife & Drum Continental drummer clothed in reverse colors with a red coat and blue facings. I really like the way that he turned out. In fact, I'm considering painting one of the "additional regiments" that were recruited in 1777 to augment the existing state and Continental regiments in Washington's army. Several of these sported red coats, probably captured from British stores. Eventually, they would have dyed the cloth brown.
Posted by Der Alte Fritz at 7:37 PM