I finished basing the Austrian hussars that I have been working on over the past week or so, the Baranyay Hussars. This is one of my favorite hussar units due to the color combination of dark green and sky blue with red trim. It was the very first wargame unit that I painted circa 1986, originally with RSM figures, now replaced with Minden Miniatures.


This brings my Austrian cavalry contingent up to par with my Prussians, just in time for the SYW Association refight of the Battle of Kolin.


The Prussian army will soon be breaking camp and marching off to their first campaign of the year. So it seems like a good opportunity to show some pictures of the Prussian camp before all of the tents and things come down.

Since the army is spending the Winter here in the town of Altenburg, there is sufficient time to add such amenities  as a sentry box and toll gate on the entrance to the camp.


The Prussian filed bakery is on 24-hour duty, it seems, with so many mouths to feed.The bakery ovens and related scenic vignettes were scratch built by Ed Phillips.


The field forge and blacksmith's shop have been particularly busy over the Winter as many of the horses get new shoes for the coming year.


To the east of Altenburg lies the main encampment of the Prussian army. The reank and file spend their spare time in their tents while King Frederick and his staff are quartered inside the Gasthaus Alter Fritz. Most of the buildings were scratch built by Herb Gundt. The Garde du Corps and the artillery park make for an imposing sight for any visitors.

After the Prussians break camp we shall see how things are going in the nearby Austrian camp. 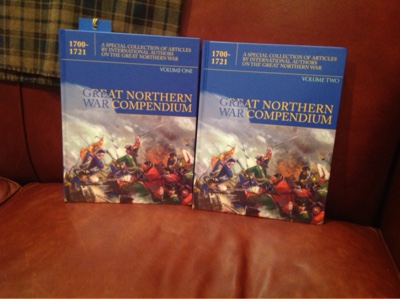 My copy of The Great Northern War Compendium arrived yesterday and my first reaction, upon opening the books, is "WOW!" And my second reaction is that the books greatly exceed any expectations that I might have had when I placed my order about a month ago.
As the late Ed McMahon might have said to Carnak the Magician ( Johnny Carson), "everything that you could possibly want to know about the Great Northern War is in this book!"
The two volume compendium is written by a virtual army of experts in the field from a wide variety of countries including Sweden, Russia, Poland, Lithuania, Finland, Denmark, Germany, the UK and the United States.
The book's topics are diverse and include biographies of key participants, uniform information ( Sweden, Russia, Saxony, Dano-Norwegian, Polish, Holstein Gottorp, Hanover, Prussia and the Ottoman Empire), tactical studies of the various countries, battle summaries and maps, logistics and fortifications, and even a section on the plague that struck the Baltic region of Europe.
At the end of Volume 2, there is a listing of museums, reenactor groups and even manufacturers of wargaming figures. The set costs $125.00 and it looks to provide a lot of value for the money. I think that this is one of those books that you will go to time and again if you are even remotely interested in the period.
The books are published by THGC Publishing ( www.thehistoricalgamecompany.com ) in St. Louis, MO. 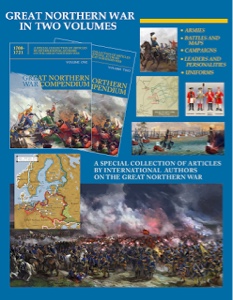 In short, I give the book set my highest recommendation .
D
Posted by Der Alte Fritz at 9:56 PM 3 comments:

Austrian Reinforcements Are On Their Way

The latest additions to my Minden SYW Austrian army are arriving in time to participate in the refight of the Battle of Kolin at the Seven Years War Association convention in South Bend, IN on March 31 and April 1st.

Alex Akers painted the two 30-figure battalions comprising the IR21 Arenberg Regiment in Austrian service. Please click on any picture to enlarge your viewing pleasure and sometimes a double click enlarges the pix even more.

The inhaber of the regiment was Karl Raymond, Duke von Arenberg as of 1754, so it was his regiment throughout the entire SYW. The regiment's garrison was in Slovenia since 1755, but later changed to Koniggratz in 1763. The regiment was recruited from across the Holy Roman Empire. A report in 1755 stated that the regiment suffered from a high desertion rate due to harsh discipline and drunkeness. [from Stephen Summerfield's book, "Austrian Army of the SYW"]. Despite that record, it was apparently considered a good fighting regiment.

The regiment participated in most of the major battles of the SYW in Silesia-Bohemia including Leuthen, Breslau, Hochkirch, Kunersdorf, Torgau and Freiberg. This is a good regiment to have in any SYW Austrian wargaming army.


I thought that Alex Akers did an excellent job of painting this unit for me. He uses a cream undercoat color with white highlights that is very effective. My photographs probably do no justice to Alex's talents. The flags are from GMB Designs and the bases are finished in the usual static grass and tufts.


I am also working on adding a regiment of the Baranyai Hussars to my Austrian army. The WIP picture of the first of two 12-figure squadrons is shown below:


This is probably one of my favorite Austrian regiments of any kind because I like the combination of the green pelisse and dolman with red lace and trim, plus the sky blue breeches, which really stand out. You will notice that the hussar trumpeter wears a tricorn hat instead of a busby and a long uniform coat rather than the pelisse. My very first painted unit of wargame figures was the Baranyai Hussars, using the old RSM figures. That unit has long passed on to another inhaber, but I remember it fondly.

Finally, Alex painted a regiment of Croats or Grenz Infantry Regiment Peterwardeiner. We selected this regiment because I already had one unit with red coats and one unit with dark blue coats. Alex did not want to paint any of the white coated Croats, so we selected the Peterwardeiner regiment. I will probably paint one of the white coated Croat regiments in the future. This makes identifying the units easy in a game: simple call them the Red Grenzers, Blue Grenzers or Brown Greasers and anyone will know what I'm talking about.

I have yet to base the unit, but they do look rather spiffy so I lined them up for a photo shoot for you to see.

I have recently completed the rebasing and increase in size of my old Puttkamer Hussars regiment for the SYW Prussian army. The figures were 20 RSM Prussian hussars painted by Bill Biles around 1990 and based on cardboard, painted green and dipped into a bowl of green flock. That was state of the art in 1990, but not so these days. So I thought that I would rebase the unit and add in four new Minden command figures to bring it up to 24 figures (two squadrons of 12 figures).

Read the captions on the pictures for the rest of the story of the rebasing process.

It is amazing how much better the regiment is now that it has been rebased with spackel terraining, static grass and some tufts.

As a result, I was able to quickly add a new unit of cavalry to my Prussian army, needing only to paint four command figures using Minden figures. I did not use a 2-tone paint scheme on the hussars' breeches and dolman. Only the white pelisse has 2-tone painting to bring out the white better. I wanted the new figures to blend in with the old painting style.

So the Puttkamer Hussars are now ready to get into action and make life miserable for the Austrians.
Posted by Der Alte Fritz at 12:33 PM 5 comments: