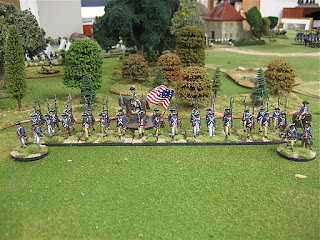 Here is a quick posting of a few piccies that I took of the first Continental regiment that I have painted, using my Fife & Drum range of figures. This is supposed to be one of the Pennsylvania regiments. I am currently working on the 3rd Pennsylvania Regiment, with brown coats and white facings - looks pretty cool. 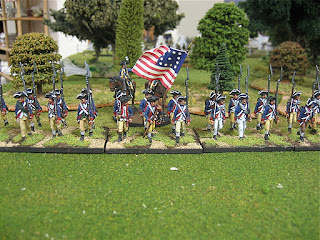 Closer view of the new command figures that were recently added to the range. 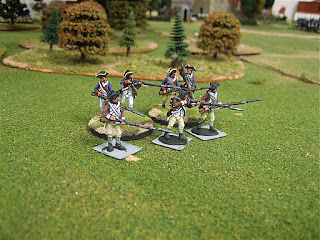 This picture shows the same three figures painted in blue and in brown coats. I really like the way that the brown coated unit is turning out.

The flag is from GMB Designs, which is simply the best provider of flags in the hobby.

The next figures in the production queue will be a set of British line infantry, marching and some British grenadiers in bearskins, also marching.
Posted by Der Alte Fritz at 12:43 AM 5 comments:

I am slashing the prices on the Old Glory items that were offered for sale two weeks ago as I need the storage space, so they are priced to sell:

Proceeds are going to be used to fund new Fife & Drum figures.

The Road to Lancaster

Click the picture to see the full view (half of the picture has been cut off on this blog page, but clicking the pix reveals the whole scene).

I found this interesting picture posted on TMP today, depicting the baggage train of General Forbes as it was leaving Lancaster, PA to march on Fort Duquesne and avenge the defeat of Braddock's army during the French & Indian War. The picture comes courtesy of an interesting blog called Flintlock & Tomahawk.
It is an interesting picture on several levels; for one, it provides a nice template for laying out Colonial America terrain for wargames. I see lots of ideas in that picture - different kinds of fencing and structure, some log cabins and others board and clapboard.
I foresee some serious orders sent to Herb Gundt for some of this terrain.
On another level, it reminds me of where my ancestors came from. I have been doing a lot of genealogic research on my family of late, and I have found that we are basically descendants of Pennsylvania Dutch settlers in the York and Lancaster counties of Pennsylvania. Undoubtedly my ancestors fled religious persecution in Germany in the early 18th Century and joined a lot of other Germans from the Rhenish and Palatinate parts of the country, landing in Philadelphia.
Somewhere along the way, an ancestor named Jacob married Rebecca Edwards, whose grandfather,Thomas Edwards, was the Lt. Colonel in charge of the 2nd Lancaster Militia battalion in 1780, during the American Revolution (or AWI for those of you on the other side of the pond). Edwards had emigrated from County Antrim in Ireland and married an English girl, whose daughter married a German. That is quite an ethnic stew for you.
I've also been working on some Continental regiments, using my Fife & Drum figures, and hope to post the first unit within the next day or two, after I have terrained the bases. Next in the queue, a Continental regiment in brown coats, rather than blue coats.