This past weekend, on September 26, 2020, we gathered at the barracks of Major General Pettygree and played our version of the Dervish assault on the city of Khartoum during the Mahdist Uprising in 1884-85. We used the 19th Century variount of Bill Protz's "Battailes dans l'Ancien Regime" (or B.A.R. for short) for our game. Our gaming group has a strong familiarity  with the BAR rules and the rules' mechanics are easy to adapt to other historical periods. We use BAR variations to fight the Jacobite Rebellion, Napoleonic and 19th Century Colonial battles. Thus anyone in our regular group already knows the mechanics of how the movement, shooting and melee systems work.

The Sirdir Himself, the Honorable Major General William Augustus Pettygree has provided an excellent piece of game background on his blog  Back To Khartoum and recently followed up with his version of the events of this game Khartoum Battle Report. Both blog articles are well crafted and fun to read so I recommend that you click on the links to Bill's blog and give them a read. It will provide context to my pictures on this blog.

Once a year, usually in the Fall season, we stage our big Colonial wargame with anywhere from six to twelve players and lots and lots of well painted and colorful 28mm British, Indians and Egyptians versus various natives in either the Sudan or on the Northwest Frontier. This year we decided to stage an assault on the town of Khartoum by the Mahdi's Dervish army.

The game was actually broken down into three seperate, but connected, games within the overall game. The central game revolved around the Dervish attack on Khartoum; the second game featured the British and Egyptian relief force marching to Khartoum; and the third game was a smaller skirmish affair involving the rescue of Mrs. Pettygree from the Dervish menace.Due to social distancing protocols we decided to limit the game to four players. The Khartoum garrison was commanded by Chuck the Lucky and me. The Dervish were commanded by Earl K. and Bill P. We switched sides to play the relief column game, but time ran out before we could play the rescue Mrs. Pettygree game.

Game One - Assault on Khartoum

Major General Charles Gordon, commander of the Khartoum garrison, had five companies (16 figures plus one officer per company) of Egyptian-Soudanese troops and two heavy Krupp cannon for his defense of the city. He also had one Nile River gunboat, but this had been dispatched up river to accompany the British Museum's archeological dig of pharaoh Rutin Tutin III's lost tomb. Mrs. Pettygree and friends were part of that expedition .

The Mahdi brought a force of approximately 300 foot soldiers to attack Khartoum. Another Dervish army of 30 cavalry and 120 Beja tribesmen were posted in the rear areas to keep a watch for any British relief column that might appear (more on that later).

The game ended with the arrival of Major General Pettygree's relief column of Egyptian lancers and the British Camel Corps. The Egyptian lancers charged the Beja foot twice and were twice repulsed. So their commander decided to leave things well alone and shadow the Beja instead of attacking them.

The Beja holding force of two tribes on foot and a collection of cavalry/camelry had no firearms, so when the Camel Corps deployed, the Beja had no choice but to fall back out of rifle and Gardner Gun range.

Meanwhile, inside the walls of Khartoum, the Beja command had fought a ferocious battle with the Sudanese regulars and were badly mauled. The Riverine Arab command fared better and had nearly wiped out their Egyptian foes. However, the Riverine Arabs had suffered enough casualties to force a "fall back" die roll on a D6. They still had a lot of fight left in them, but deemed it pointless to continue the battle.

So General Gordon barely hung on to the city and he was saved by the arrival of Major General Pettygree's relief force.

The game was played on one long table measureing 24 feet by 6 feet. We did not have need of the two side tables that were available, given that most of the action was on the vertical axis of the table, rather than on the horizontal axis. We all had a fun time playing the game, Colonial games lend themselves to having fun no matter which side one plays on. We used the BAR rules up until the Dervish were scaling the walls and getting into individual hand to hand melees with the Egyptians, at which point we switched to a more simple system of melee using D6 dice.

What will next year bring in Toy Soldier Land? Perhaps Rorke's Drift?
Posted by Der Alte Fritz at 1:55 PM 15 comments:

The Sudan Project is winding down and I wanted to get some SYW troops onto the game table. So the table was cleared of Khartoum (which was actually moved to its own 6ft by 7.5ft table) and Dervish figures; and then I set out all of the figures in my Minden Miniatures SYW Russian army.

One good reason to display all of the units in a particular army in your collection is to see what might be missing and require painting. The Russian parade made it apparent to me that I needed to add 1 to 2 Observation Corps musketeer battalions, one battalion of Russian grenadiers in summer waistcoats, 1 to 2 more battalions of line musketeers wearing waistcoats and a similar number wearing green coats. And finally, the cavalry inspection revealed that the second squadron of the Yellow Hussars needed to be painted. A few more 3-pound battalion guns would look nice too.

It looks like I have my work cut out for me over the next several months.

Coming Additions to Fife and Drum 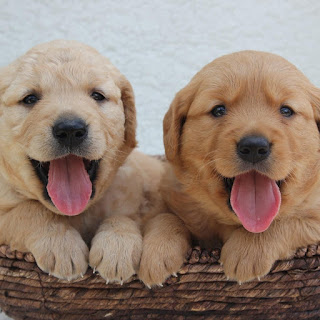 We anticipate the arrival of a new addition to Fife and Drum on October 23, 2020. A female Golden Retriever, to be named Bella, will be joining the crew at Fife and Drum Central. We visited the breeder last weekend and Lelia picked out her dog and named her. Each of the six pups in the litter were off the wall cute so one could hardly go wrong choosing any of the dogs. When Lelia picked up the pup with the red collar, said dog gave Lelia a dainty dog licking on her cheek and we all knew that this particular dog had chosen Lelia.

Here are some pictures of the actual pups ( the picture at the top of this page is file stock from the internet). Bella is the puppy with the red collar. 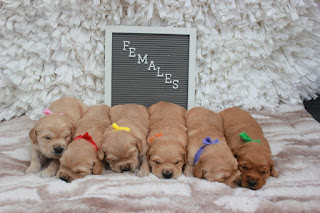 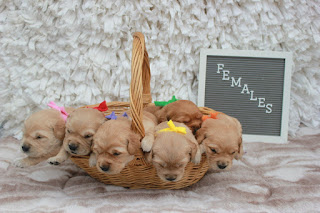 Lelia and I are in charge of all dog care. Mom is prohibited from walking Bella so that the latter does not bond to the former. All of our previous dogs have bonded primarily to Mom, due largely to the fact that it was always Mom who was taking care of the dogs (walks and feeding). She has become the Dog Whisperer in our house because all dogs naturally gravitate towards her. So Lelia and I are starting with a clean canvas and the chance to create the numero uni bond with Bella. Dad will be doing the house breaking training and spend numerous nights sleeping on the couch to offset the expected night crying of Bella until she acclimates to her new home. Hopefully, our Lab Augie, will help Bella have some comfortable nights in the beginning.

It’s been years since we have had a puppy. We know the drill and routine and know how difficult the first six to eight months can be. However, the payoff with an adult Golden is well worth the effort that one puts in.

We are looking forward to Bella’s arrival.

Sitting On A Dock On the Bey

Shower curtains are the order of the day. No, not for the bathtub, but rather, for providing water effects on tabletop waterways. Place a strip of clear plastic from a shower curtain liner as an overlay on a piece of blue felt. This provides a shiny shimmering effect to your water.

This is a temporary color for the water. I’m looking for something darker available in felt. I’d appreciate any suggestions in the comment box on this post.

Here are some pictures of the wharf in my Khartoum display. I think that the addition of the river and the wharf adds so much to the overall look of the tabletop display. A gunboat manned by RN sailors and a nuggar are docked at the wharf. A nuggar is a small boat that carries cargo on the Nile River. 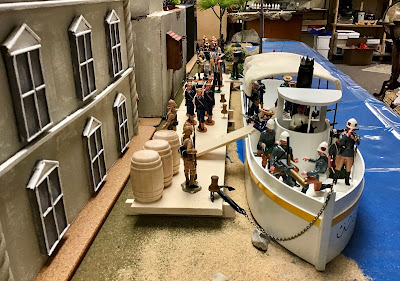 I had thought that I was finished with building construction, but with the addition of the waterfront, I think that I need a riverside warehouse and/or a customs office.

De Nile Is A River

This past weekend in the Virtual Wargames Club "Tidders" (Kingdom of Wittenberg blog) taught us how to make water effects on a sheet of blue felt: you take a plastic shower curtain liner and cut off a piece and lay it over the felt. Simple solution and it looks great. Thank you Tidders for the tip.

I went to my local Target store and bought the recommended shower curtain and I will soon cut it up for river sections on my Nile River. Yes, I added the Nile to my Khartoum set up. The VWC talk about water, rivers and streams got me to thinking that a little bit of de Nile would enhance the look of the tabletop. So I layed down a six foot long strip of blue felt on the end of the table. Now before doing this, I had to shift the town and the walls 18 inches further down the table in order to create enough room for the river and wharf. While I was doing this, I shifted the position of some of the buildings inside the walls. For example, the queyside walkway in Khartoum rolled past the Governor's Palace and said palace was on the wrong side of my table layout. Thus it shifted along with every other building on the table.

Then I layed down a temporary dock/pier along the edge of the Nile and scattered some sand along the shoreline to hide the edge of the felt. A little bit of lichen, some palm trees, and Bob's your uncle! I have not yet placed the shower curtain overlay on the felt. I will do so soon and post a picture or two on this blog.

The river gunboat was made by a toy soldier company called Trophy of Wales, which has long been out of business. The trade boat is actually a small Norse boat that Herb Gundt modified for me a long long time ago. It is good to finally put it to use. It doesn't have a lateen sail, but it is good enough for me.

I have taken a short break from building construction these past several days, shifting work to painting more 54mm Armies In Plastic Dervish figures. I have to build out several of my Ansar and Beja units to 60 figures.

I will work on making a proper boat dock this week and maybe even get a start on the mosque. The new town layout has room for a couple more buildings and I am thinking that a warehouse would look nice along the river.
Posted by Der Alte Fritz at 12:30 PM 9 comments: