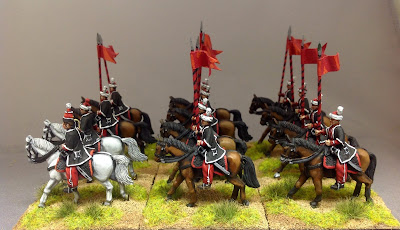 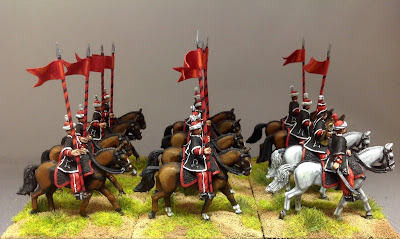 I've Got Too Many SYW Dragoons! Sale

I have too many SYW dragoons in stock because Old Fritz double ordered some of the figures from the caster. Doh!

Well, my mistake becomes your benefit because Fife and Drum/Minden Miniatures is going to offer a 10% discount for any of the following product codes from September 24th to October 18th, 2019:

Click on the link to the Fife and Drum web store and select any of the above product codes. At checkout, enter the code Dragoon123 to get your 10% discount.

Please help me get rid of all of these dang dragoons. Their horses are eating me out of house and home and those unruly dragoons are keeping Mrs. Fritz up late at night. Mrs. Fritz is not happy.


This past weekend we convened at the manse of General Pettygree to play our annual Fall Sudan Game.

While the Seaforth Highlanders and the Sikhs were dealing with the Beja and Dervish near Site A, there came a rumbling in the distance off the left flank. The Egyptian brigade that was defending El Wil-Yum were suddenly seen pouring over a bridge and creek and running pell mell towards the Seaforths. They were all that was left of the El Wil-Yum garrison and they were being pursued by a number of mad Beja, who were screaming for blood.


Fortunately, the Sahara sun began its descent into the horizon and the Seaforth Highlanders staged a classic rearguard defense at the mass of European civilians, Egyptian and Sikh soldiers retire to the west and to safety.

I have no idea of what happened around the river port area, off to my far left. I gleaned that the Egyptian garrison were overwhelmed by the swarm of Beja warriors who invaded via the river in their dhows. Afterall, the remains of that garrison were trickling back towards my Seaforth Highlanders so I knew that something had gone terribly wrong "over there".


I would direct you, dear readers, to the blog and journal of Major General Augustus Pettygree for the rest of the story "over there". 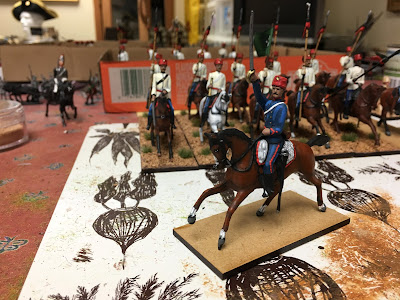 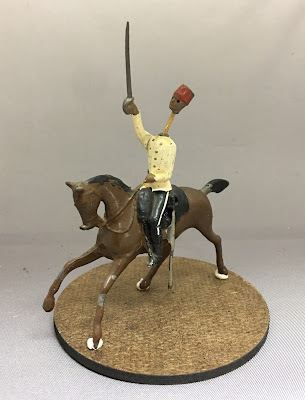 Tomorrow I am playing in a 28mm Sudan game at General Pettygree's house and once that game is over, the General will do some landscaping of the table to turn it into the terrain for the Battle of Firket, which will be played using 54mm toy soldiers.
Posted by Der Alte Fritz at 10:08 PM 10 comments:

Egyptian Lancers in the Sudan


Over the long holiday weekend,  I started basing individual Britain's toy soldier Egyptian Lancers for our Battle of Ferket toy soldier game later this month. I already had a dozen lancers glossed and based from previous battles. I had repainted them in gloss enamels to give them that toy soldier effect. Another dozen, unbased, were eBay purchases that I planned to base "as is" without any touching up.

However, the third set of 12 figures (we use 12-figure squadrons) were a complete wreck and needed extensive work. I didn't have my enamel paints on hand, having put them into an offsite storage locker, so my plan was to repaint the figures in matte acrylic paint and then give them a couple of coats of spray gloss  protection. After finishing a couple of the lancers in matte, I started liking the way that they looked and so I decided to do this squadron in matte, rather than in gloss.

You can see the results in the pictures on this blog report.

The Britain's figures are kind of fun to paint, not having too much detail, which makes the job go fairly fast. The thing about the figures that surprised me though, was how nice the horses are. They have an amazing amount of musculature detail such as one would find on 28mm wargame figures. This is part of what led me to the decision to go with the matte finish.


I plan on adding a lancer standard bearer by cutting the lance pennons and lance tip off of a spare lance that I have in the bits box. I am also working a lancer bugler - basic lancer with lance arm removed and replaced with a bugle arm from a Skinner's Horse bugler.

If I had to do it again, I would do a few things differently. For starters, I would use green epoxy putty to fill in some of the holes that have developed from lead rot in the figures. I would probably rework the hands with putty to give them more definition in the individual fingers and also add a wire lanyard to the lance pole. These are toy soldiers that are meant to be played with, so I am not too concerned about the lead rot in a couple of the figures. I assume that this continues over the years and might eventually render the figure unusable, but that's all right.

I have seen some collectors do some amazing rehabilitation work on Britain's figures and so I want to try out some of these methods and see how well I can do.

These figures will be placed on MDF bases measuring 2-inches wide and 3-inches deep. I drill holes in the bases where the horse hooves attach to the wood so as to make the bond strong. Then I terrain the bases with my usual spackle paste (wallboard paste) and very fine railroad ballast.