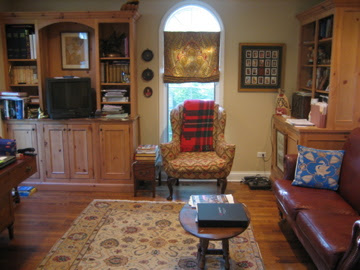 Here is a picture of my den or library room at home. This is the epicenter of all things Fritz. It is a nice, quiet and contemplative spot, complete with sliding French doors so that I can keep out those who should be seen rather than heard, et cetera et cetera.

In the right hand corner, you can see a reproduction British Grenadier Mitre for the 44th Regiment, that I bought from The Discriminating General, in Canada. Above that are some playing cards featuring Napoleonic personages, which I had framed in green and gold. The book case holds my collection of American Revolution books and other American history subjects.

Moving to the left hand corner, there would be an identical set of book cases that hold my 18th Century (SYW and WAS) collection of books and uniform plates. Some of the larger "coffee table" books are also kept on these shelves. Underneath the ledge of the book case is a mini-refrigerator, stocked full of the latest and best years of Diet Coke vintages. Diet Lime Coke is one of my favorites. Mrs. Fritz sometimes impinges on my mini-frig space by storing bottled tea mixes.

On the lower left hand side, you can barely make out the roll top desk, circa George II period, that my Father purchased in London back in the 1970s. He used to go on English antique expeditions to the UK and I always looked forward to seeing what finds and treasures he would find. When he passed away, I was given most of his 18th Century English antique collection, bless him.

In the upper left hand corner, is an old cathode ray tube TV that is still in good working order. I'm rather amazed at how bulky the old TV sets are compared to the current generation of flat panel screen TVs that most people now have. One of these days, I will have to replace it with something more modern, but as long as it works (and it is a secondary or tertiary TV in our house), there is no rush to get a new model. The surrounding book shelves contain largely Napoleonic books. Moving to the right, the three little round pictures are of Napoleon, Josephine, and another Napoleon picture. I couldn't find a decent picture of Frederick the Great (most of the portraits are a bit too severe or too "Alte", for my tastes).

So on quiet evenings, I sit in here reading or developing plans for world domination, until Mrs. Fritz walks in and sets things straight. Bless her too.

***********
We were in Colorado two weeks ago for our summer vacation spent in the Rocky Mountain National Park near the town of Estes Park, Colorado. We decided to drive the 1,000 plus miles from Chicago to Colorado so that Lady Emma Cuddlestone-Smythe could get a better sense of how big the United States really is.  We drove about 500 miles on the first day, stopping at Lincoln, Nebraska over night. We drove via Interstate 80 which follows the old pioneer trail to the west, following the North Platte River in to Colorado. Once we crossed the border from Nebraska to Colorado, the terrain became almost arid with only sage brush thriving under the dry conditions. Occasionally we would see a field of crops or greenery where there had been some irrigation. About an hour or so in to Colorado, the feint outline of the mountains could be seen and there was a sense of excitement as we drew nearer to the mountains.

We stayed there for a week at a dude ranch which provided opportunities for horseback riding, hiking and other outdoor activities. On some days, Lady Emma stayed at the Kids Camp while the Missus and I hiked some of the many splendid trails that can be found in Rocky Mountain National Park.

Longs Peak, see the picture above, is one of the highest peaks in Colorado. It is the center peak shown in the picture above and I have climbed it three times. The peak on the left, Mount Meeker is 13,000 plus feet and I have climbed that one as well. I forget the name of the peak on the right - I did not climb that. But those adventures are long past and as I grow older, I'm content to stick to trail hiking.

*******
On Saturday, seven of us convened at Chez Protz to refight the Battle of the Coa River Bridge in Spain 1810. I will post a battle report this week, but for now, here is a little taster of the action. I am sorry to say that it was a bad day for Black Bob Crauford and the Light Division. It was an overwhelming French victory.

The Higher Power works in mysterious ways, and so it is that we are now about to introduce the newest member to our family: Pippa, the Golden Retreiver, shown above with Lady Emma Cuddlestone-Smythe. Back in November 2011, we had two Goldens, Katie and Dave, and both died within a month of each other.

Then virtually out of the blue, we received a phone call from a Golden Retriever rescue service that they had Tiberius (Ti) available for adoption. So in January 2012, we added Ti to our family. We knew that we wanted to have a second dog so that Ti could have a companion. He really likes to be around other dogs.

We had explored getting a puppy, but that kind of fell through (along with the deposit, ouch!). Then another adoption opportunity was not the right fit for our situation. Then once again, out of the blue, we received a call the other day from the rescue service. They had a female, named Pippa, who was available for adoption. We visited Pippa this afternoon, and it was clear that she and Ti were getting along very well (um, she's spayed, so um, uh, you know, they liked to play together) so it looked like a good match for our family.

At one point, Lady Emma fell down and Pippa dashed over to her to make sure that she was OK, and if we had had any doubts, they all went away in an instant.

So next weekend, we will be a two-dog house once again, with Tiberius and Pippa holding court and making us all very happy and grateful to have them in our lives.
Posted by Der Alte Fritz at 6:29 PM 11 comments: