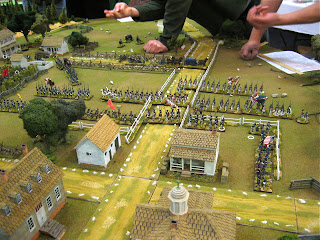 The Battle of Chester Courthouse, circa 1777, near Philadelphia.


I spent the weekend attending the Seven Years War Association convention in South Bend, Indiana (March 30-31). I think that convention director Randy Frye told me that the attendence was around 80 people -- not too bad, but slightly down from the 100 or more that we get in years when the economy is humming. I arrived thursday evening and set up my booth for the Fife & Drum Miniatures that I was selling, then spent the rest of the evening catching up with old friends and acquaintances whom I had not seen for quite awhile.


Ed Phillips, in particular, had been quite busy making diaramas over the past year. Here is a picture of one of them, a pontoon construction ( I will post more pix of these diaramas in another blog post in a day or two): 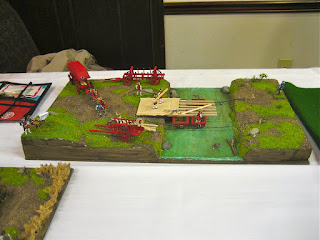 Ed's scratch-built pontoon construction (French engineers) using scratch-built wagons, pontoons, etc, and some of the Minden Miniatures pioneers. In the left most corner, note the engineer officer pointing to the plans along with a nifty telescope. The officer is a conversion from the Minden French Legion de Hainhault set of figures. Click to enlarge.


On Friday morning, I had a chance to play in Dean West's scenario at Torgau, which depicted Saldern's attack from the rear of the Austrian position on the plateau in the evening. The terrain, as is Dean's habit, was well researched and looked very authentic in the 15mm size. The rules were Dean's "Final Argument of Kings" and I found that they produced an enjoyable and interesting game. They are a little more complex than I am used to, but Dean has tweaked the rules over the years to the point where even Der Alte Fritz, Himself, can figure out the mechanics. The Prussians won the game - I played one of the Austrian commands - but I don't think that anyone cared who won or lost.


Later in the afternoon, I left the Torgau game to begin setting up my AWI game featuring my Fife & Drum Miniatures. The picture below presents the pre-game layout on a 15 foot long table. I actually had to lop off about 3 feet of table space (beyond the scenic divider in the back ground) that I did not need. That has never happened to me before! 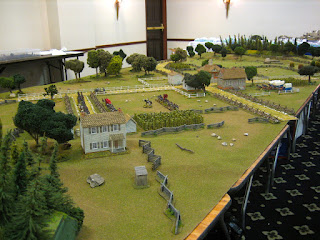 The battlefield, looking south to north (east on the right and west on the left). The Curtis Farm is in the foreground. The town of Chester Courthouse is in the centre of the cross roads that converge on the town.


The scenario was set at the end of the Philadelphia Campaign of 1777. The American army has collected stores and supplies for the coming winter at the town of Chester Courthouse. The British have learned of this and want to stage a raid in force to destroy the supplies and possibly bag a lot of prisoners. The Americans obviously want to prevent the capture of the supplies. The problem is that the Americans have been caught napping and so there is only a lone brigade of Pennsylvania militia available to defend the town. The militia have to hang on and delay the British until the Continental regulars can arrive in the town.

Two brigades of British/Hessian forces approach Chester CH from the south road and run into the militia defending the Curtis Farm, well foreward of the town. Eventually, the elite Maryland Brigade arrives on the eastern approach to the town and extends its battle line west, to the Boscowne Wood. Just when things are starting to look good for the American side and the forces of liberty, the British brigade of Guards and Light Infantry arrive on the American flank from the west and jeopardize the whole Continental position. Finally, the Pennsylvania brigade hurries in double time from the north and arrives in time to cover the withdrawal of the Maryland Brigade and the valuable supply wagons.

It was a convincing British battlefield victory, but the American achieved their objective of extracting their supplies and sending them to a safe place. This scenario is based on another battle from a different historical era. Can you guess which battle this game was based on? Click on the comments box and leave your answer below. 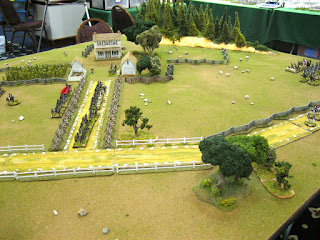 The Curtis Farm and the American Militia brigade. Hessians can be seen in the upper right corner, just arriving onto the battlefield from the south. 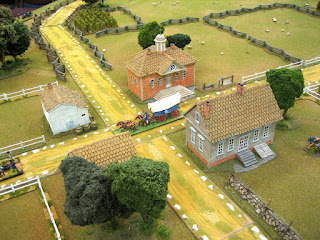 A closer view of the town of Chester C.H. The Conestoga Wagon was scratch-built by Ed Phillips. Herb Gundt made the buildings, fences and trees. DAF made the road sections. 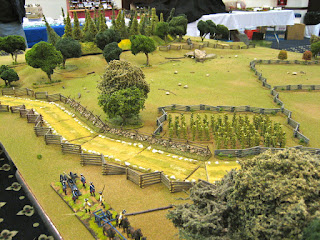 This is the western approach to the town (I forgot to move the artillery before snapping the shutter) along which the British Guards and Lights attacked. Leading to... 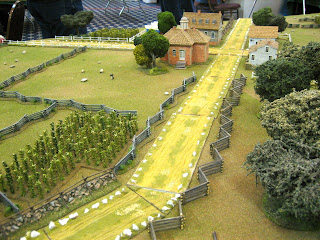 ... a view of Chester C.H. from the western approach. The Boscowne Wood is seen on the right. 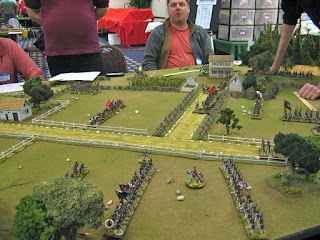 The defense of the Curtis Farm. The British brigade attempts to outflank the militia by passing through the Boscowne Wood. 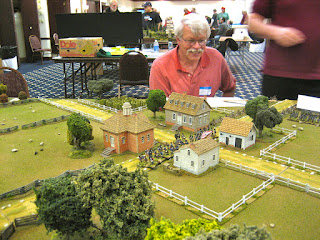 However, the elite Maryland Brigade is now arriving onto the field, and the American commander is obviously pleased with this turn of events. :) 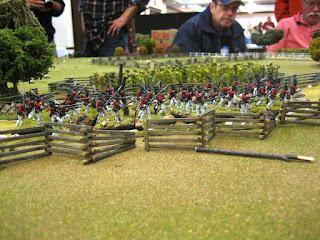 But the mood changes quickly as the British Light Battalion now arrives on the flank of the Maryland Brigade, as it enters the field from the west. The British Guards battalion is just behind the Light battalion. Looks like trouble in River City for the Continentals. 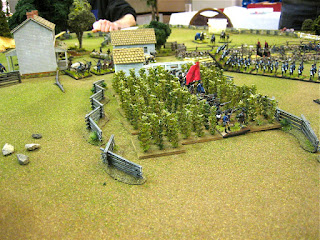 The militia continue to hold out in the Curtis Farm cornfield despite overwhelming odds against them. They had to fight the Hessian regulars and jagers all day. 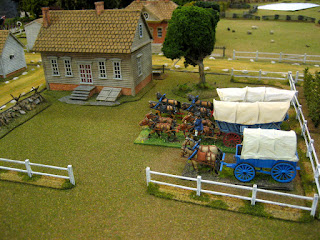 A nice picture of the Conestoga Wagons that Ed Phillips built for me. 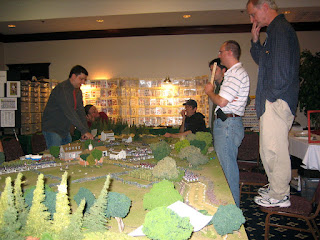 A picture of Der Alte Fritz (standing on the chair) surveying all of the mayhem while preparing to render some momentous decision. I think that that sly old fox, Bill Protz, snuck in and took a picture of me with my own camera. Thanks! I hardly ever get to have any pictures of myself in any of my pictures. It is much appreciated, whoever the mystery photographer was. 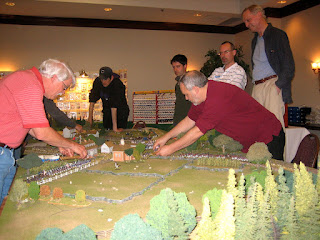 Another view of the closing stages of the battle. DAF appears to be quite pleased with himself.


Well that is all for this year. It was a nice convention and sales of the Fife & Drum figures were rather brisk. Thanks to all of the players who made for a good game, particularly to Steve (in the salmon/red polo shirt) and Bill Protz, who both had the patience to command brigades that did not arrive on the field for at least five turns (althought the turns go very fast in my games).

As expected, my game did not win any of the awards that were handed out, even though I think that this game might well have been the best one that I have ever done at this convention. I for one, would like to see all conventions dispense of any "best of show" awards as I find them hurtful to all of the other game judges who spend lots of time and effort to host a game and entertain the convention goers. These things are very counter-productive to the hobby. I take comfort from the fact that all of the players in my game appeared to have had a great time, especially the American militia commander, who made the best of a tough situation and kept all of us laughing with his commentary on the finer points of stealing pigs, cows and turkeys, to the detriment of the Hessians. That is what wargaming is really all about. I also appreciate the many on lookers who expressed their appreciation for the table that I layed out, the well painted figures, and the entertaining scenario. I doff my tricorn to all of you to express my appreciation for your kind comments.


Thanks also to those who purchased Fife & Drum figures. The funds will go directly into more new greens. Richard will be starting the AWI artillery for both sides this month. We will start with a set of firing poses and loading poses for each side, or 16 figures total. Artillery equipment is also on the work bench at this time.
Posted by Der Alte Fritz at 12:18 AM 14 comments: