I thought that I would create a separate page on my blog to track the progress of my preparations for the games that I will run at Historicon in July 2023. I will post on this page at the end of each week to record what has been accomplished that week. You can also check out my painting progress on the Home Page of my blog. Look at the column on the left side of the page "Sudan Figures Painted in 2022"to view my running total of painted Sudan figures.

My game for Historcon 2023 is the storming of Khartoum by The Mahdi’s army. I might also do the Battle of Abu Klea using the same tables and ground terrain. 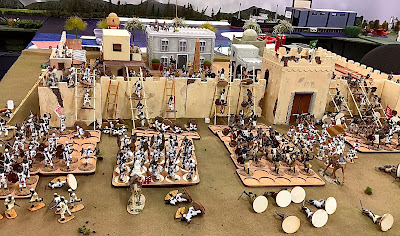 This was the end of my first week home from Lancaster, PA and I decided that 54mm Khartoum would be my game at Historicon 2023. I received the first two "Rattlesnake Ranch" desert terrain mats from Cigar Box Battle Mats and laid them out on my game table to see what they would look like. I was rather pleased with the result and knew that I'd made the right choice for my table top.

I decided that my Egyptian Army contingent of figures needed its own artillery component so I converted some Armies In Plastic British artillerymen into Egyptian crew by doing a head swap:

I set up all of my 54mm plastic Mahdist soldiers and Egyptian army soldiers on my 6ft by 14ft game table. This enables me to see what I have and to determine what I will need for my Khartoum game at Historicon. I already have 100 Beja warriors and I decided that I would need double that for any future games.

If my memory serves me correctly, I painted 20 more Beja this week.

I also went scouting for terrain pieces at my local Petco store and found a couple of Turtle Terrarium pieces that fit right in with my Sudan terrain. I may eventually repaint the two mountains in a red-brown tone.

I painted another 10 Beja warriors and 5 Dervish cavalry figures this week.

I ordered a poster via eBay from the Khartoum movie, featuring Charleton Heston as General Charles Gordon and Sir Laurence Olivier as The Mahdi. The poster will be part of the signage and display area in my Khartoum game at Historicon 2023. 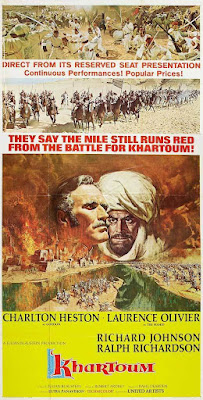 The Egyptian artillery crewmen, a 6-pound gun and a Gatling Gun were painted this week. Another 10 Beja were also painted.

I needed some leaders or "Personality Figures" to command my army of the Mahdi. First up was a conversion of a Dervish horseman into Osman Digna, the leader of the Beja/Haddendowa armies in the eastern part of the Sudan. The picture below compares the original figure on the left, with Osman Digna conversion figure on the right. I did a head swap, putting a Beja head on the cavalry man and then cut off the wicker shield that he was holding in his left hand. I also cut off the spear and replaced it with a metal pin sword. Osman Digna's left arm was sort of dangling in thin air so I decided that I would have him holding the reins of his horse with that hand. The reins were made from florists wire. 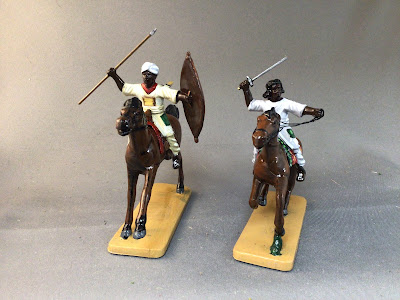 I also painted another cavalry figure as one of the leaders of the Ansar tribes. No conversions were involved with this figure. I just tricked out his saddle blanket a bit.

I also painted two companies of Sudanese soldiers for my Egyptian army. These are Africans wearing white tunics and dark blue trousers. Their fezzes are tan instead of red.

At this point in time I have two 16-figure companies of Sudanese troops.

The big news of this week was my decision to add a railroad track and train to my Sudan games. The G-Scale train is the most suitable for 54mm and 60mm figures. I purchased one flat car and four pieces of track so that I could see what the train might look like on the game table. I like the results:

I finished another 10 Beja bringing the total of the new unit up to 40 figures. I need ten more to finish the Beja unit of 50 figures.

This week three British Bell Tents arrived from several eBay dealers of new Britains War Along the Nile and Zulu figure ranges. Bell tents were used by the British well into the 20th Century so I thought it would be appropriate to use them in my Sudan games.

I am running low on Dervish and Beja figures to paint this week, so I looked at what I had in my stock of plastic figures and found three boxes of British Camel Corps to paint. That's 12 mounted camel troops.

This was Terrain Week so I set aside the paint brushes and worked on making a pair of mountains out of pink foam insulation material. These items will be finished next week. I also made a desert oasis, more Acacia trees from plastic flowers, and put a crude house on a base, adding some accoutrements such as boxes, clay pots and stones. I did some experiments with making a road bed for the train tracks and invented two ways to warp the bases of the road bed. I am still searching for a solution for the road bed.

Finally, I did a major conversion of a flatbed car, repainting it and adding rusted steel side panels. 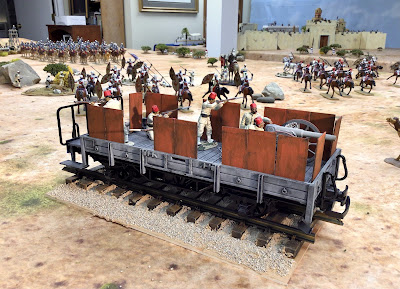 This week was a continuation of Terrain Week as I made a double mountain model connected by a stone bridge. I want to have several terrain models that I can place on top of my Cigar Box Battles desert mats. 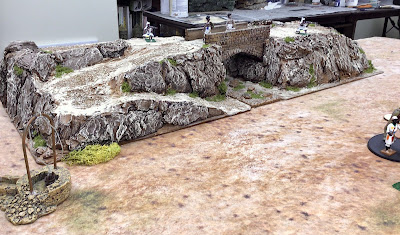 I used Pat Smith’s book about making terrain for a step by step set of instructions to make this model, of which I’m very pleased. The model was made with two inch pink insulation board, large pine bark nuggets to simulate rock, and a bit of wall board paste. The mountains are based on cork placemats that I found at Target Stores.

This week I carved out some time to do a solo refight of the Battle of Abu Klea featuring the Camel Corps versus the Dervish. I was play testing the scenario and getting some experience with the rules. On the terrain side of things, I made another jebel (hill) module to place atop the game table. 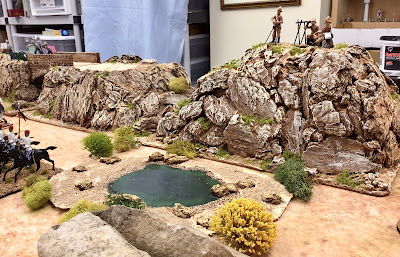 I continued working on terrain this week as I built an oasis model that really looks the part. The large rocky piece in the upper middle part of the picture was purchased at a pet supplies store from the fish aquarium department. I repainted from green to a more desert looking hue. Then I needed a base for the rocks, so I built the lagoon and some surrounding rocks. The rocky piece sits on the oasis board and can be removed for storage and travel. 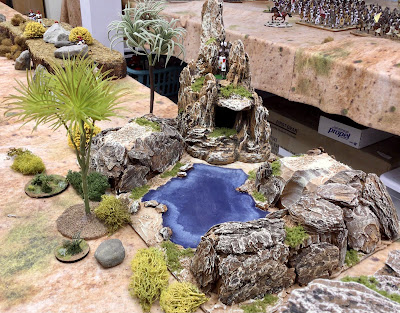 I also made some sections of a dry wadi to place on top of my game table. I cut up strips of cork from a table placemat and glued bits of tree bark to make rocks. Wallboard paste mixed with tan paint was applied to the cork, and then I sprinkled some railroad ballast onto the wet paste. Letting it dry overnight, I then dry brushed some light tan and white colors over the surface.

This week I attended the Chicago Toy Soldier Show in Schaumburg, IL. My shopping list focused on finding 1/32 scale cattle to use for a cattle drive scenario outside of Khartoum (recreating the same in the movie), some Middle Eastern civilians, and maybe some useful terrain items.

I'm happy to say that I scored a big win with my purchase of a 1/32 scale Nile River paddle wheel steamer. I also found the cattle and increased the civilian population of Khartoum.

I also finished painting 10 more Beja warriors for the Mahdist army. This brings the total up to 71 figures.

I finished painting another 10 Beja, bringing the total up to 81 figures since July of this year. I have another 10 figures on the painting table.