The 55th Regiment of Foot - Fife & Drum British infantry figures. Click pix to enlarge.
Over the past weekend, I finally finished my second battalion of British infantry for my AWI army: the 55th Regiment which sport some nifty looking dark green facings and regimental colour. This regiment was brigaded with the 27th (Inniskillings) Regt. that I had previously painted during the Philadelphia Campaign of 1777. They were part of the 2nd Brigade commanded by Major General James Grant (5th, 10th, 27th, 40th and 55th regiments) which, in turn, were part of the Right Division commanded by Lt. General von Knyphausen.
The brigade had an estimated strength of 1,500 men spread across 5 regiments, for an average regimental strength of 300 men. So using a 1:10 ratio of castings to actual men, I would need 150 figures to represent Grant's Brigade on the tabletop.
How did I happen to choose this particular brigade to be my first Fife & Drum Miniatures British Brigade? For one thing, the name Grant made me think of Charles Grant Senior and Junior of wargaming fame, so that sort of drew me to this brigade as an homage to this distinguished family. And secondly, the brigade has a nice mix of facing colors for the various regiments:
5th - light green
10th - yellow
27th - buff (the famous Inniskilling Regiment)
40th - buff (and famous for their stand in the Chew House at Germantown)
55th - dark green
This should provide you with a little bit of insight into how I select particular regiments or brigades to paint when I am planning my wargaming armies out on paper.
The rest of Knyphausen's Division includes the following as well:
1st Brigade - commanded by ???
4th - royal blue (The King's Own Regiment)
23rd - royal blue (The Royal Welch Fusiliers)
28th - yellow
29th - yellow
71st Highland Regiment - 2 btns or 1,000 men, practically a brigade by itself. And I do love to have Highlander regiments in all of my British armies. So this is a big plus.
Hessian Brigade - Stirn
Lieb
Mirbach
Donop
Loos
Queen' Rangers - about 400 men
Ferguson's Rifles - about 130 men
16th Light Dragoons - 1 squadron (they wear a really cool variant of the Tarleton cap)
The above roster should provide some hints as to what will be added to the Fife & Drum range of AWI miniatures.
Posted by Der Alte Fritz at 10:11 PM 4 comments: 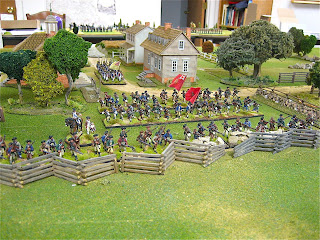 Here is a picture of the complete American militia brigade that I will be fielding in my AWI game at this year's SYW Assn. convention on March 30-31 in South Bend, Indiana. The unit in the back row with the red flag with the Union Jack in the canton is the newest militia unit that I have added to the brigade. They are the Westmoreland County Militia in Pennsylvania. Flags by GMB Designs.
So, what do you think? Feel free to leave a comment below.
Posted by Der Alte Fritz at 7:55 PM 6 comments: 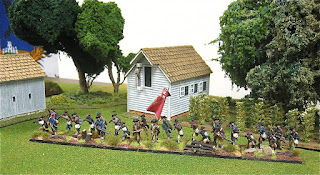 I finished painting a 25-figure American Militia battalion this evening to use in my AWI game at the Seven Years War Association convention in South Bend on March 30 and 31. With two weeks to go, it appears that I will reach all of my painting goals for this game, i.e. to have 12 battalions of figures for the American side. I only have one more battalion of Continentals (24 figures) to paint over the next week and a half. That seems doable from my perspective.
The American forces will include the following:
Pennsylvania Brigade - 90 figures
1st Pennsylvania (30 figures)
3rd Pennsylvania (30 figures)
5th Pennsylvania (30 figures)
Maryland Brigade - 98 figures
1st Maryland (25 figures)
2nd Maryland (25 figures)
6th Maryland (24 figures)
Delaware Regiment (24 figures)
Militia Brigade - 90 figures
Westmoreland County Militia (25 figures)
Bucks County Militia (25 figures)
1st Battalion - Lancaster Militia Regt. (20 figures)
2nd Battalion - Lancaster Militia Regt. (20 figures)
Work In Progress
Continental Artillery - 1 x 3pdr with 4 crew
11th Pennsylvania Regt. (24 figures)
This order of battle will provide for 3 player commands. I plan to have a similar number of British/Hessian commands for the other team. I will use some of my Minden Miniatures SYW Prussians as stand ins for the Hessians (2 musketeer btns, 1 grenadier btn, and 1 x 6 pdr artillery).
I will take some pictures of some of the newer units that I've painted over the past several weeks and hopefully post them tomorrow.
Posted by Der Alte Fritz at 12:49 AM 1 comment: