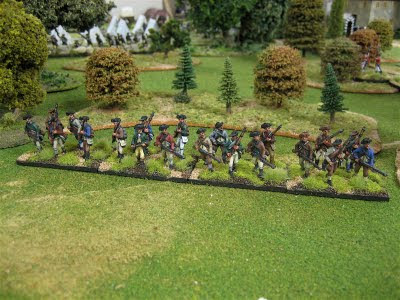 
I finished painting and basing an American militia regiment for the American Revolution, using only the "advancing" poses in the new Fife & Drum Miniatures range of figures. So I now have two regiments: one is comprised of firing line poses, and the other is comprised of advancing poses. It seemed like a good way of telling the two regiments apart. 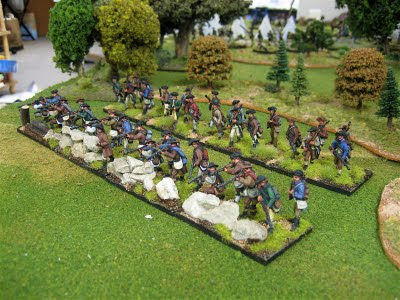 Here is a view of both regiments, forming a brigade of 400 men at a 1:10 ratio of figures to men.


If you are interested in ordering some of these nice figures, then head on over to my Fife & Drum blog (see link on the left hand side of this page).

One other piece of news: today I ordered several scenic backdrops from PECO in the UK. Now I can finally say good-bye to the old blue towel that I have been using as a photo background. Good riddance to that. I am looking forward to its arrival, hopefully next week.
Posted by Der Alte Fritz at 12:10 AM 7 comments: 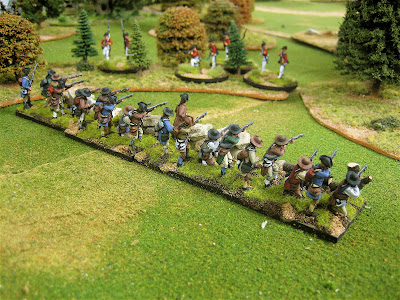 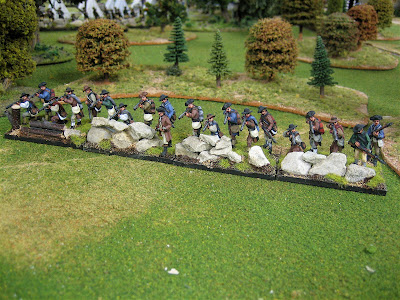 Here are some pictures, front and back, of the finished American Milita bases that I completed last evening. Please visit my Fife & Drum blog site, by clicking on the link in the "Links" column on the left side of this page.
Posted by Der Alte Fritz at 12:58 AM 3 comments: 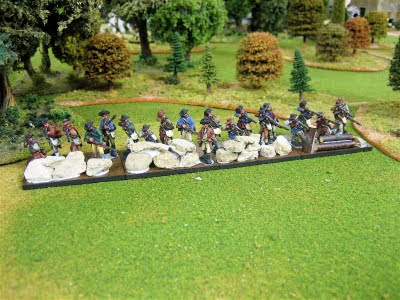 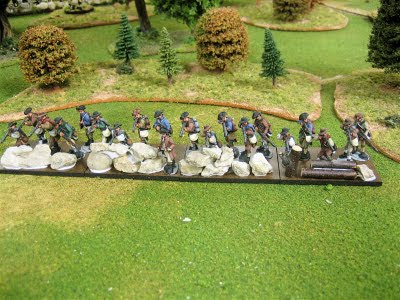 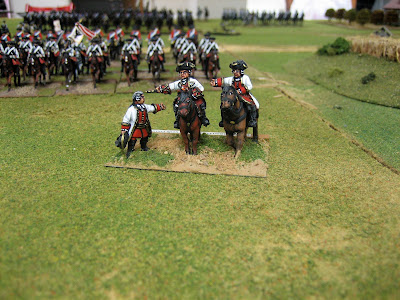 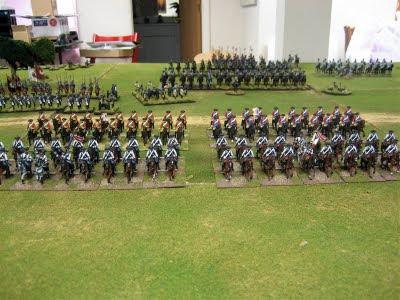 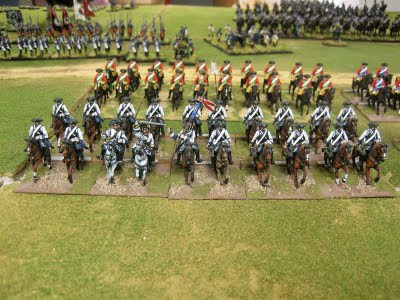 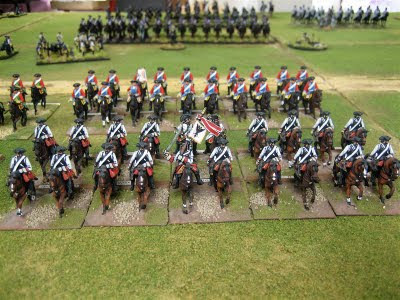 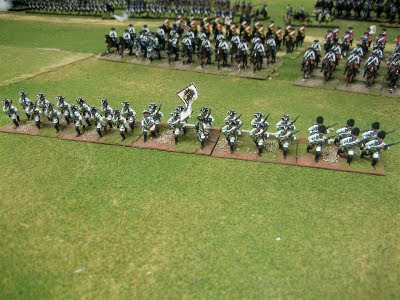 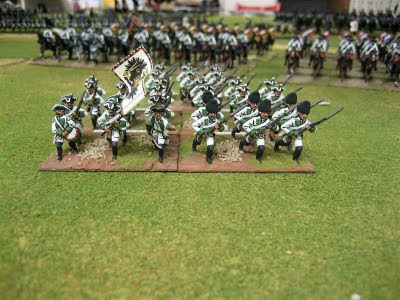 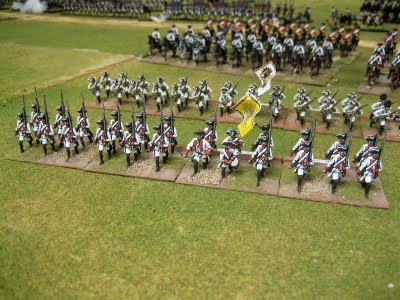 and we can make the necessary arrangements to transfer these fine figures to your army.
Posted by Der Alte Fritz at 12:04 PM 1 comment: 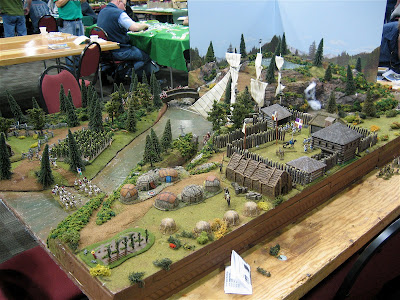 Spectacular 28mm terrain for a French & Indian War skirmish game. Note the painted backdrop. The fort was magificent and there was a really cool looking British ship sailing up the river to attack the French fort.


I spent Saturday afternoon at the HMGS-Midwest's annual Little Wars Convention and had fun looking at all of the games and investigating what new treasures there were in the dealer area. I was not particularly enamored with the new venue, largely because it is about a two hour drive from my house, whereas the old site was just fifteen minutes away. Oh well. Other than that, the venue at the DuPage Expo Center seemed OK, but it was about half the size of the Marriot Tennis Courts used in previous years. Games seemed to be packed in a little bit tighter, as you might expect.

There did not seem to be as many dealers attending this year, but I could be wrong about that as that was just my impression. The one thing about the convention that really stood out was the quality of the games and the terrain that the game judges were using. I would estimate that about one third of the tables had custom-made terrain boards that were by in large, very impressive. 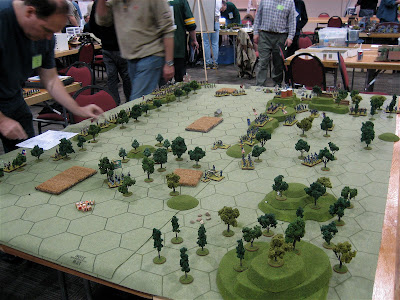 The game shown above was really an eye-catcher due to the high quality of the painted miniatures. The game judge told me that they were painted by the fellow who has the blog titled, "McPhee's Miniature Men". He used a mix of Foundry, 2nd Generation Old Glory and Crusader, to name a few, but it was the 2nd Generation Old Glory ACW figures that really caught my eye. They are really beautiful figures and evoke the style of the late Dave Alsop's original OG ACW range. 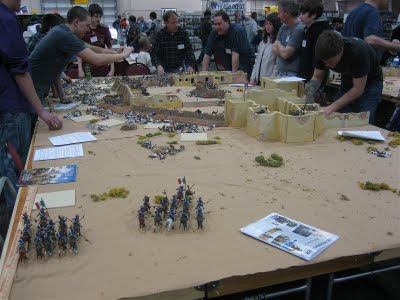 The Alamo game, in 54mm, has been at the last couple of conventions and it never fails to draw a crowd of onlookers. You can tell that all of the players are having fun participating in this game.

And now for a couple of WW2 games that looked very good to me. I also had a picture of a spectacular 28mm Arnheim game, but alas, the picture was a bit too blurry to use on this blog. 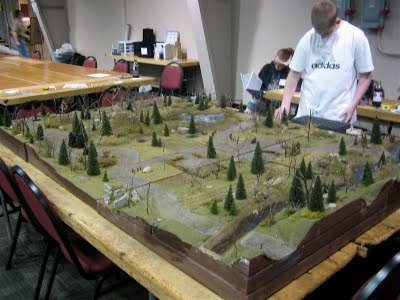 This looks like a Flames of War game. Note the build up of the contours using pink insulation board. The terrain included a nice resin-poured stream. 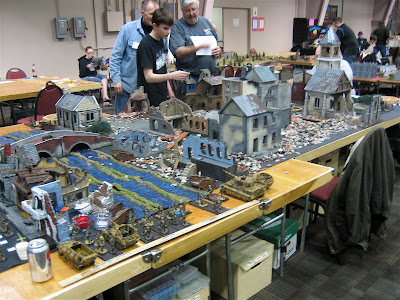 I think that this was a 28mm or a 54mm Stalingrad game. This one has been at Little Wars for several years now. The ruins are scratch built and the rubble consists of colored cardboard pieces that are randomly scattered across the table. Simple, but very effective idea for rubble.

Now, on to the dealer area: 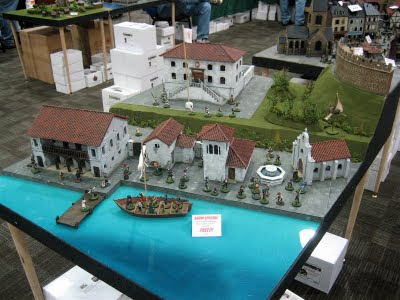 Some of the new offerings from Miniature Building Authority: Spanish or Caribbean town in 28mm. The Governor's House on the high ground was very attractive. I almost got weak in the knees when I saw it. I really, really wanted to buy it, but I resisted. 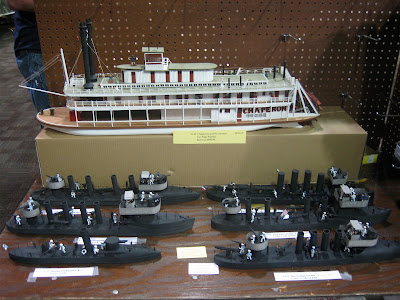 Rich Houston's scratch built ships. By the end of the afternoon, most of the models on the table had been sold. The paddle wheel steamer was priced at $500 (the kit alone cost $300) and was very well crafted. 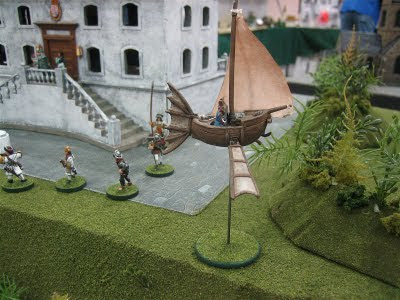 Hasslefree Miniatures' 15mm flying boat decorated the Miniature Building Authority display. I want several of these. Hmm, gives me ideas for my 18th Century Flying Machines Game that I have been thinking about doing one day.

I didn't do much shopping this year as I was meeting Herb Gundt at the convention and picking up some Highland Crofts that he made for my Jacobite Rebellion army, plus another dozen or so large trees that Herb creates to a very high standard. So that kind of tapped out my spending funds. However, I've now got the Old Glory 2nd Generation ACW range, the MBA Caribbean buildings and a few other items on my radar for future purchases.

In summary, Little Wars was a bit further drive from my house, the new venue is a bit cozier, but the quality of the games was noticeably better. I did not run a game this year, as I am still feeling a bit burned out from gaming, plus, I wanted to see the lay of the land and determine what the logistical requirements would be at the new, but unfamiliar site. I will probably run an AWI game at next year's Little Wars convention in April 2012.
Posted by Der Alte Fritz at 9:17 PM 10 comments:

Fife & Drum Blog Is Set Up

I have set up a mock up of the blog site that I plan to use, initially, for posting information for the new Fife & Drum Miniatures range of AWI figures that are sculpted by Richard Ansell. This will be a temporary arrangement until I can get a proper web page and shopping cart feature set up.

My caster informs me that the American Militia and the British Light Infantry figures have been cast, and I am awaiting the receipt of the inventory before I "go live" with the new blog and start selling figures. In the short term, I plan to follow the model used by Frank Hammond for sales of his Minden Miniatures SYW figures. So if you want to place an order, then contact me via e-mail at: altefritz1740@yahoo.com with your order and I will send you a Paypal request for the payment.

I am setting April 20, 2011 as the probable start date, although once the inventory arrives, then I will make a proper announcement on this and my Fife & Drum blogsite.

I have been busy the past week painting some sample American Militia figures so that I can put one wargame unit together for picture taking purposes. Gee, I'm glad that I held onto all of those Colonial America buildings that Herb Gundt made for me.
Posted by Der Alte Fritz at 12:15 AM 4 comments: