The Gremlins Are Gone - Problem Fixed

My end of the Fife and Drum Miniatures website is working again so I will be able to get all orders shipped by Monday August 30, 2021.

Thank you for your patience in dealing with the tech gremlins.

Posted by Der Alte Fritz at 1:05 AM No comments:

Web Store Gremlins Are At Work

Hello everyone. I am having a problem with the host of my webstore for Fife and Drum Miniatures and may not be able to ship some of the orders for awhile.

The webstore appears to work and if an order is received using PayPal, then PayPal sends me a copy of your order. If you use a credit card though, I only get a notice from my provider of credit card services that I have received an amount of money, but it does not tell me who the purchaser is or what they ordered.

So bottom line, I can currently ship PayPal orders but I can not ship credit card orders until the server glitch is fixed.

If you have submitted a credit card order in recent days, then please send me an email with your information (name, address and items ordered) and I can probably mail your order.

altefritz1740@yahoo.com is my email address

Hopefully, the issue will be fixed by the end of the day, but it has been ongoing for the past two days.

Posted by Der Alte Fritz at 2:04 PM No comments:

What’s Wrong With This Picture? 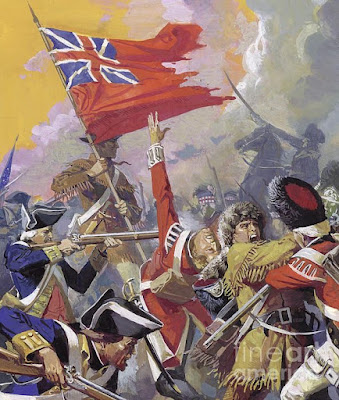 How many uniform and other errors can you spot in this picture? Leave your answer in the Comments section below.

The Seven Years War Association convention was held this past weekend at the Ramada Lodge in South Bend, Indiana. I had a wonderful time presenting the Freeman's Farm game on Friday and Saturday afternoons, but I have to say that I am completely knackered afterwords and several days later, I am still feeling the effects of a lot of hard work. However, as always, it is completely worth the effort doing double duty as a game host and a vendor of figures at the show.

I heard that the attendance was over 100 people through Saturday which is a very good turn out by the members considering all of the Covid angst that we have all gone through over the past year. My congratulations and compliments go out to the two convention organizers, Ken Bunger (vendors) and Alex Burns (game masters). Ken did a good job of coaxing the usual vendors to the show (as if we needed much prodding) while Alex assembled a great line up of games. There were 34 games spread over the three days of the convention: Thursday evening, Friday and Saturday. Game themes included 12 SYW, 2 WAS, 9 AWI, 3 FIW and 8 "Other" taking place in the 18th Century. Adding the WAS, SYW and FIW together, what I consider the "Frederician Era" games totaled 17 games compared to 9 for the runner up, AWI period. The SYWA convention covers the complete era of linear warfare from post English Civil War through the American Revolution. Personally, I alternate AWI and SYW game scenarios from convention to convention so I will probably be hosting a SYW game next year.

Here are some pictures of a few of the games at this year's convention.

In addition, we had seminars presented by Jim McIntyre (the development of light infantry theory in the 18th Century), a panel discussion about historical wargaming and its future and how to reach out to "young people", and finally, a presentation by Dr. Chris Juergen about the deployment of Hessian troops early in the AWI.

It appeared that every game was full so that indicates a high percentage of participation by the attendees. Both of my games had the full complement of players, and in fact, I had to squeeze in an extra player into both games so that all those who were interested could play in the game.

Here are several more pictures of Jeurgen Olk's Sugar Wars game. His armies have an eclectic mix of figures from Fife and Drum, Crann Tara, Front Rank and many others. 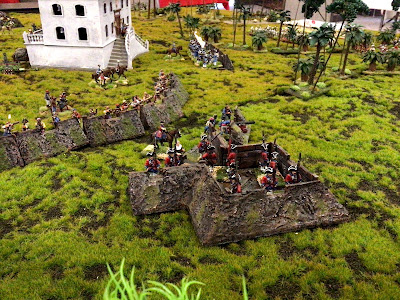 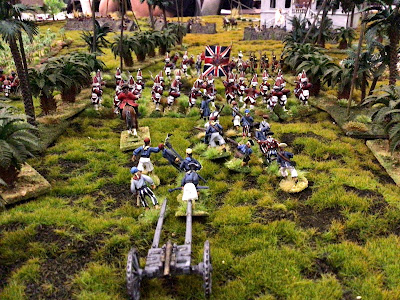 And now for something completely different, pictures from my Freeman's Farm AWI game:

I like to place vignettes of the various farms in the corners of the game table where they won't impede the movement of troops, but they add some delightful color to the game presentation. Here are a few examples:

Let's get on with the pictures of the game{s} in progress.

The British scored a convincing win in the first game as they smashed through the American center with relative ease. The American left had no choice but to retire from the field, while the militia in the forest on the American right flank were holding their own. I decided to get rid of the small round skirmish stands that the British had as they were too powerful relative to their size (they needed a 1 or 2 on ) D10 dice. Each skirmish figure rolled on D10 and in one instance, all four skirmishers scored a hit against one of the Continental regiments. Now a formed regiment is often tossing four dice when it fires and it didn't make a lot of sense for four skirmishers to have the same fire power as 16 to 20 formed troops. I also reduced each of the British line regiments by one stand, thereby reducing the British units from 40 figures to 32 figures. These changes  resulted in a more balanced game in my second game.

All in all, in was a successful convention for the attendees and for me as a game host.  I got an invite from the head of HMGS to stage my Freeman's Farm game at next year's Little Wars convention in April 2022. Lots of compliments came my way for the table layout and I must say that I agree with them, I had been painting figures and working on terrain since October 2020 and it seems that everything came together quite nicely.

I did break one of my own rules, which is to not be painting figures at the last minute for the game commitment. I could very easily have used American regiments from my Philadelphia Campaign army to fill out the ranks, but I wanted to have a uniformity of basing for the Northern Army at Saratoga. I used bases measuring 60mm frontage by 80mm depth for the eight units in this army. Each American unit had 30 figures while the British had 40 figures on 80mm frontage by 40mm depth bases.

My Fife and Drum Rules for the American Revolution were a success and I have been using them, with some tweaks here and there, for nearly 30 years. The rules are printed on one side of a single 8-1/2 by 11 inch sheet of paper. The mechanics for firing, melee and morale are the same, which makes it easier for a person to master the rules in a few short turns. I want my convention gamers to be able to focus on their tactics rather than worrying about the rules. The rules address this issue and result in a fun game for the participants.