Here are a couple of pictures of my small but growing SYW Russian army. The grenadier battalion represents the 1st Grenadier Regiment in the Seven Years War and uses RSM figures plus some Minden French command figures painted as Russians.

The musketeer battalion are all Minden French without lapels but with turnbacks, painted as Russians. 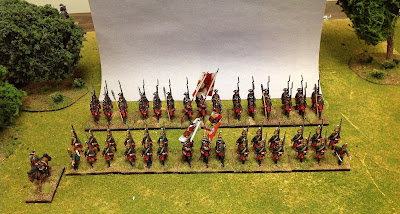 Christopher Duffy says of the battalion:

"Warnery says of these grenadiers at Prague that they were the only ones who did not open fire, but pressed home the attack with the bayonet point! After all, they were Pomeranians ... who are beyond doubt the best infantry in the world." Mauled and captured at Landeshut.

A classic Pomeranian regiment, distinguished at Soor, Prague and at Neustadt (15 March 1760). Frederick wrote to Major-General Karl Christoph von der Goltz on the latter occasion, "I wish to convey a compliment to the officers of Manteufel in my name. They have acted in our old, honourable way, and not according to the infamous modern example of other folk."

His commentary on the parent Prinz Moritz Regiment (IR22):

On 5 January 1741 the regiment entered Breslau in blue and red uniforms with straw colored waistcoats ... a splendid collection of men, with shining weapons that were a delight to see. Massacred at Kolin and suffered heavily at Zorndorf, but did well at Torgau and Burkersdorf.

Note that the grenadiers did not always fight in the same battles as their parent regiments and could even be in different Prussian armies. So while both IR17 and IR22 were at Kolin, the Kremzow Grenadier Battalion had remained with the main army at Prague. The battalion also fought at Rossbach, Leuthen (where it helped spear head the assault as part of the advant guard on the right wing), Zorndorf, Kunersdorf, among others.

The presents have all been wrapped, the stockings are hung on the fireplace mantel awaiting St. Nicholas, and the dinner tables are all set in preparation for the 24 guests that will be arriving on Christmas Day.

That can mean only one thing: it's time to paint!

I wish all of my readers and regular followers a very Merry Christmas. 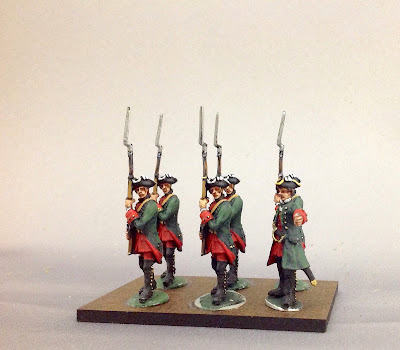 I painted six of the Savoy infantry figures from Crann Tara as Russian musketeers and I am very pleased with how they turned out. I will definitely be using some of these in my Faux Russian SYW army. I really like the "at the ready" pose of the figures.

Click on the link below if you are interested in purchasing some of these figures or to simply learn more about them.

You can see the painted figures from various angles in the pictures below: 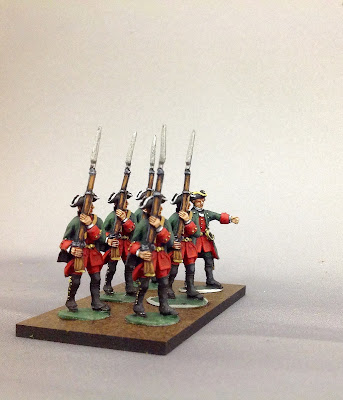 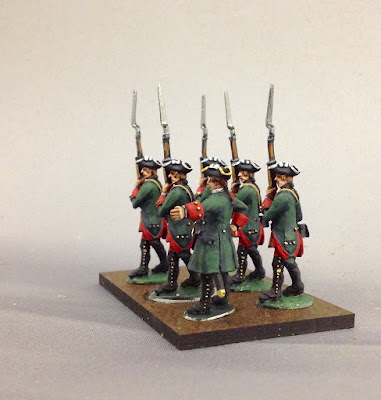 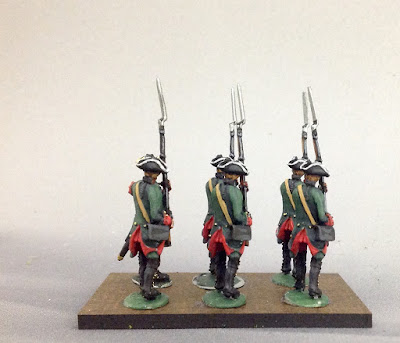 RSM Russian Grenadiers for the SYW

Well, I had a bag of 36 RSM Russian grenadiers just laying around (for quite a few years) and all this talk about Russians for the GNW and the SYW put a bee in my bonnet to paint them. So paint them I did over the weekend. The RSM figures paint up very easily as they are not loaded down with too much equipment. I was churning them out at a rate of 6-8 figures per day. I don't plan on painting the eyes or adding a black highlight color to the figures, although I did use two tone colors for the green coat and red waistcoat and breeches. The grenadier mitre plate is a mix of Vallejo Old Gold and a small amount of Copper paint.

The flags were downloaded from Kronoskaf and two halves of each flag were pushed together using Microsoft Word. The regiment shown in the pictures today are the 1st Standing Grenadier Regiment in the Russian army.

If you double click any of the pictures to enlarge the view, you might detect one soldier wearing white summer gaiters as opposed to the Winter black gaitors that the rest of the regiment is wearing. This is the one solitary RSM Russian that I painted circa 1990, so I added him to the regiment, without an updated paint job, in honor of his hanging around for so long.

I now have two battalions in my SYW Russian Army.


On the Work Bench


On the painting table, I am working on the Kremzow Grenadier Battalion (17/22) in the Prussian army. I completed the IR17 Manteufel Grenadiers portion of the battalion, now I have 15 of the IR22 Prinz Moritz grenadiers to paint and this unit will be ready to join the ranks of my Prussian army for my Kolin game at the Seven Years War Association Convention in March 2016.

I have to paint one more regiment of Prussian dragoons to more or less complete my Kolin Prussian army. I'm leading towards the DR3 von Meinicke Dragoons (the ones with the Rose-Pink) facings and shabraques). You can see the dragoons in the picture above.


You can also see some of the Army of Savoy figures that are produced by Crann Tara Miniatures and are compatible with all of the Richard Ansell sculpted figures such as Minden, Fife & Drum and Crann Tara. Since they have no lapels and big cuffs on their coats, I think that they will stand in nicely as Russian SYW musketeers.


Recruiting New Followers
I had 497 "followers" for quite a few weeks, but five of them deserted, despite the best efforts of my NCOs to keep the regiment in line. They must have been Saxons, methinks.

Do come back lads, all will be forgiven.

In any event, I am putting out the recruiting call for at least 8 of my regular readers to become a "Follower" so that we can boost the total to a nice even and symetrical 500 readers.
Posted by Der Alte Fritz at 8:54 PM 3 comments:

More On the Russian Project 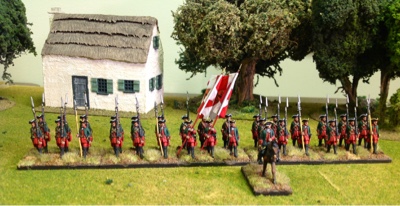 Here is a sample Russian infantry regiment that I painted last year using the French Fusiliers with turnbacks figures from the Minden Miniatures figure range. For now, they are "close enough" until I can add more Russians to the range. Russian officers and NCOs carried muskets rather than pole arms so they might require some conversion work in the future.
The flag is a Napoleonic Russian flag that I had on hand, used because this particular regiment was/is to be used in an Imaginations Campaign. I will eventually swap in a SYW era pair of colors for the unit. The flags will be from GMB Designs, as usual for me.
I shall also take a closer look at the Crann Tara Savoy infantry as potential Russian stand ins as these figures have no lapels but have turnbacks and a cartridge box worn on the belly.
Thank you to those of you who left comments on yesterday's post. There are a lot of good ideas and information therein which I find most useful.
Posted by Der Alte Fritz at 4:55 PM 5 comments:

Some Thoughts on SYW Russians 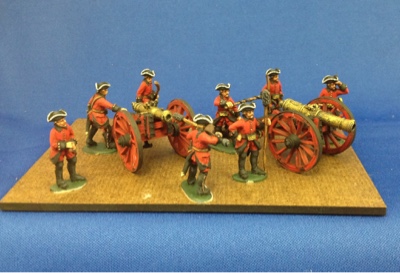 I am nearly done painting a 32-figure battalion of Great Northern War Russians ( Warfare Miniatures) and painting all of that green got me thinking about a potential project for 2016: SYW era Russians. I eventually want to game a Zorndorf scenario with my Minden Prussian army, so naturally I will need a green clad opponent.
One immediate problem is that Minden does not have any Russians (other than the artillery and crew) so what can I do about raising infantry and cavalry forces for the Russians? After perusing through the Minden range, the RSM range and Kronoskaf I came up with the following temporary solution:
1) Russian Musketeers - I will continue using the Minden French fusiliers with turn backs as Faux Russians since the uniforms are "close enough".
2) Russian Grenadiers - I will use the RSM Russian grenadiers and sprinkle in some Minden command figures and maybe even do a few head swaps.
3) Observation Corps - this will be a tough nut to crack. My choices are some significant conversions of Prussian Jagers into Ob Corps troops or use some of the Minden Russian artillery crew and place muskets rather than artillery tools in their hands. Some of the Minden Pioneers could serve the same purpose.
4) Russian artillery - Minden has everything that I need here, from loading and firing gun crews to four different kinds of artillery pieces.
5) Russian Cuirassiers and Hussars - I will use the Minden Prussian cavalry figures for these.
6) Russian Dragoons - I will use the Minde Hanoverian "Horse Regiment" figures as these do not have lapels. Thus they can stand in for the Russian Dragoons assuming that the riders have not buttoned their coats closed.
7) Russian Horse Grenadiers - I will use the RSM Russian Horse Grenadiers.
8) Cossacks - more RSM figures here. Maybe TAG has some Cossacks as well.
9) Mounted officers- Minden has a General Fermor personality figure and some of the other lesser officers can be recruited from the ranks of Minden French officers and dragoon officers.
So,there you have it, all of the elements are in place to build a Russian SYW army over the course of 2016. Of course, I will also continue to work on my GNW project here and there, keeping both balls in the air at the same time.
Posted by Der Alte Fritz at 5:38 PM 20 comments: