My father's older brother, John Purky, fought in WW2 and was killed in action January 16, 1945 while serving with the Sixth Infantry Division on Luzon, in the Philippines.

He received the Purple Heart and the Silver Star, the hard way; his citation is shown below 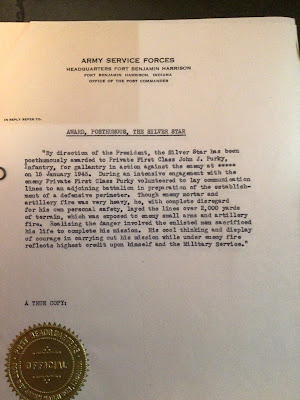 The citation states that Uncle John volunteered to lay communication wire to an adjoining battalion over 2,000 yards of terrain. I think that he was in the Signal Corps, as some of his personal pictures show a Wire Team Section and a Radio Section. He died from enemy fire while carrying out his volunteer mission.

Here are some images of the two medals. I have had these stored away in the family archives vault and forgot that we had them.

Obviously I never met my Uncle John since I was born in 1952. He was quite the musician, having learned how to play the trumpet, saxaphone and the clarinet and some of his letters to my grandmother talk about him getting together and jam with some guys from another section. He sounds like he was quite a guy and I am sorry that I never got to meet him.

Rest in Peace John Purky. You are not forgotten. 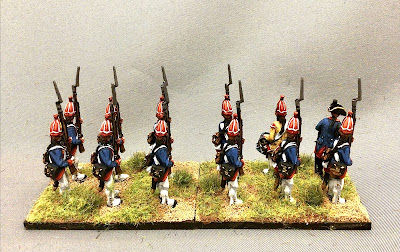 I have been falling a bit behind in posting all of the new things that I am painting for my Saratoga Project, so I will address that by posting a regiment of Brunswick troops that I painted a couple of weeks ago. I painted the  Leichtes Infanterie Bataillon von Bärner using the Fife and Drum Miniatures Hessian Jäger figures. The jäger figures have the proper aigulette on the right should and a hat pom pon that were also worn by the von Bärner light infantry soldiers. The drawback of using these figures is that they have rifles and are wearing breeches and gaitors (rather than one-piece overalls). My justification for using the jäger castings is that my light soldiers are wearing the regulation breeches and gaitors. I will have to finesse it with the rifles, simply calling them muskets without the bayonets fixed, or deciding that they are all rifle-armed. My dime, my dance floor, my rules.

Or I can go along with John Mollo's description of the light battalion uniform and not have to worry about it at all.

The four companies of light infantry, formed in 1776 and commanded by Major Ferdinand von Barner, arrived in Quebec in June 1776 and fought at Ticondaroga, Hubbardton, Freeman's Farm, Bemis Heights and Saratoga. The battalion was formed of picked men, and their uniforms were of a better quality than the normal Brunswick clothing. All ranks like the jaguars were armed with German rifles and hunting swords. Their musicians wore yellow coats with red linings and black facings, trimmed with white, black and yellow mixed lace.

I have been wondering whether or not ALL of the men in the light battalion were armed with rifles, instead of some musket-armed men. Don Troiani's book, Campaign to Saratoga - 1777 states the following:

The Leichtes Infanterie Bataillon von Bärner, consisting of four musketeer companies and one company of jäger, was the only new Braunschweig battalion raised from scratch in 1776 for service in North America. While its commissioned and noncommissioned  officers were drawn from preexisting Braunschweig corps, young men and boys were newly recruited for its ranks. This "gemeiner musketier" (musketeer private) is dressed in marching order, with a tornister (knapsack ), feldflasche (canteen), and brotbeutel (haversack), which carried rations. [this last sentence refers to Troiani's drawing that accompanies the text].

Troiani depicts the von Bärner musketeer dressed conventionally like all of the other Brunswick musketeer regiments with Prussian style uniform and equipment, plus one-piece overalls, rather than breeches and gaitors. The musketeer does not wear a belly box, although Mollo illustrates an NCO wearing a belly box for cartridges and knee breeches. Troiani indicates that there were four musketeer companies and one jäger company, the latter armed with rifles.

Here is a contemporary illustration from Captain von Germann of the Erbprinz Regiment at Saratoga, so presumably his interpretation of the appearance of the von Bärner battalion uniform and equipment should be fairly accurate. My recollection is that there is an aigullete on the right shoulder that is not shown in this picture. Troiani's image does not show the aigulette on the right shoulder because it is hidden by the positioning of the soldier.

Here is another image that I found on Pinterest. I am not familiar eith the source. The figure standing firing is an NCO, as can be told by the gold lace on its cuffs and its hat. The sprinting pose appears to be an officer and the kneeling figure is a ranker. Note that all of them are wearing a cartridge box on their belly, probably indicating that they are rifle-armed. Note also that they are wearing gaitors. Based on this image, below, I decided that I can use the Hessian Jäger figures as stand ins for the Brunswick light infantrymen. 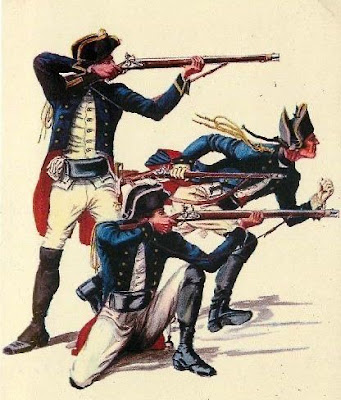 My inclination is to believe that John Mollo got it wrong about all five companies being rifle armed. It could be that he meant to show a picture of an NCO in the jäger company and that the publisher made a mistake with the text. Who knows? I think that the von Germann illustration is probably the better depiction of the uniform and equipment of the light battalion. If anyone cares to share additional information, then please post the information or a link in the comments section below.

Whether one is right and one is wrong, I'm sticking with the battalion as I have painted them.

I have placed six figures on each stand, which measures 80mm wide by 60mm deep. This size base provides sufficient room to spread the figures out rather than making them look like formed troops shoulder to shoulder. 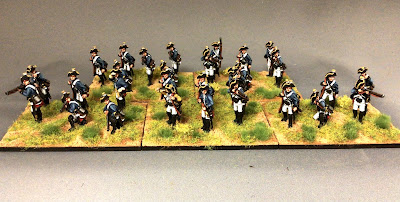 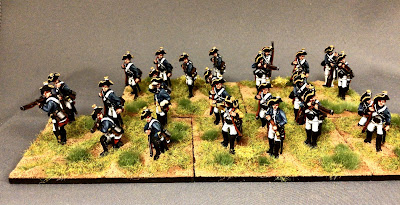 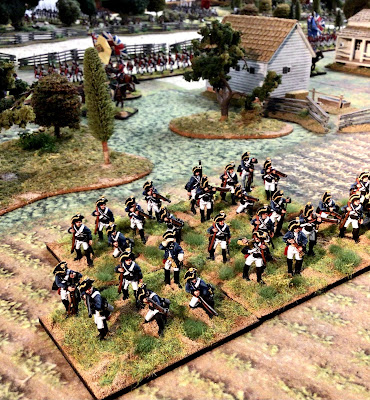 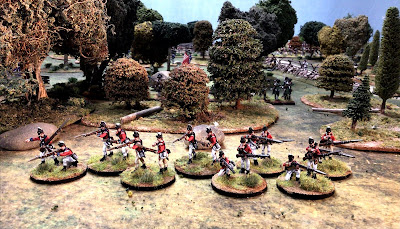 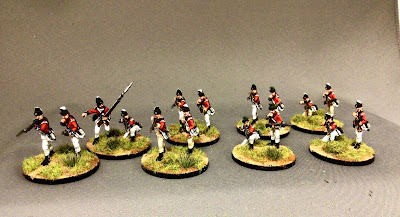 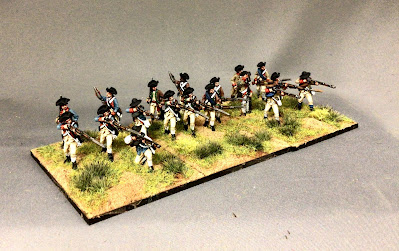