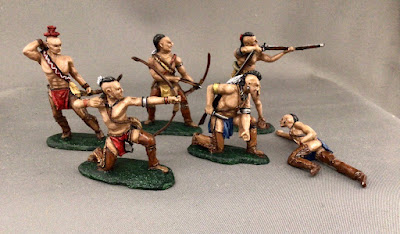 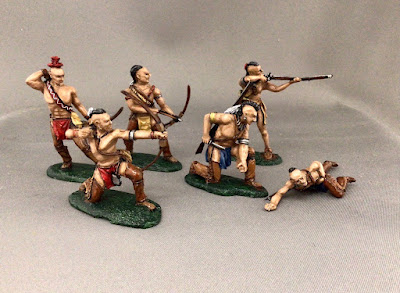 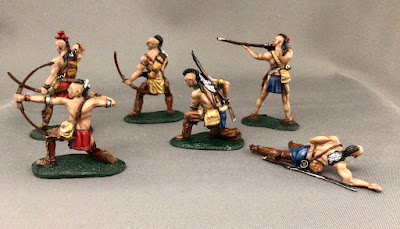 Now that these figures have been gifted, I can post pictures of the 54mm Indians that I painted for my daughter (Lady Emma Cuddlestone-Smythe) for a Christmas present. She bought the figures at Gettysburg earlier this year. I thought that it would be a good surprise if she opened a box on Christmas Day and found them painted.

I gave the figures a gloss coating to protect the paint from rubbing off or cracking. These are hard plastic figures. I have no idea what brand they are, but they look nice and are easy to paint. 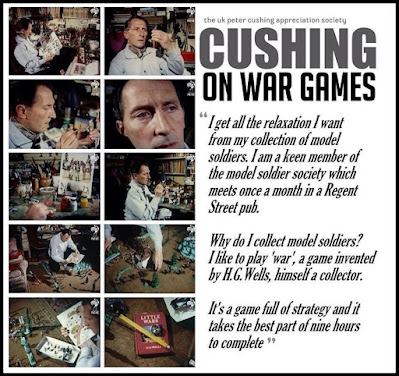 I found this little gem on Facebook (or is it Meta now) and saved it. If anyone ever asks you why you play with Little Men then cite Peter Cushing's take on the hobby.

I find myself worrying about what people will think when they learn that I war game. Oftentimes they are fascinated by my hobby and ask me lots and lots of questions about it. I guess that the take away is this:

Enjoy your hobby and don't worry about what anyone else thinks about it.

One of My Favorite Vignettes 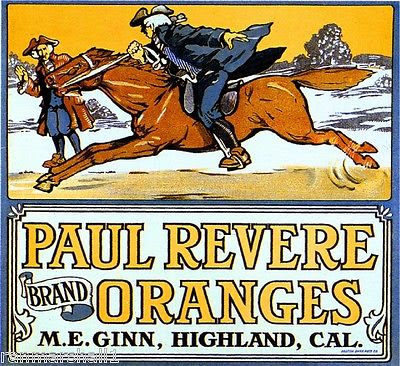 I like to collect images of product advertisements that use historical references therein. The Highland Fruit Growers Association in California has a couple of interesting ads to promote their citrus oranges. 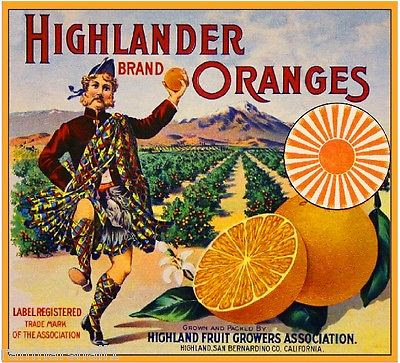 And here is an advertisement for biscuits from the UK. I wonder if Huntley & Palmers still exist? My understanding is that "biscuits" in the UK are what we call "cookies" in the USA. 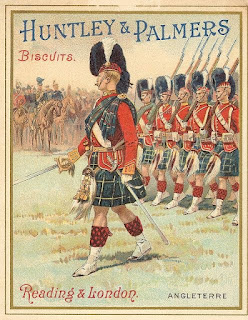 Biggest Drink That I’ve Ever Seen 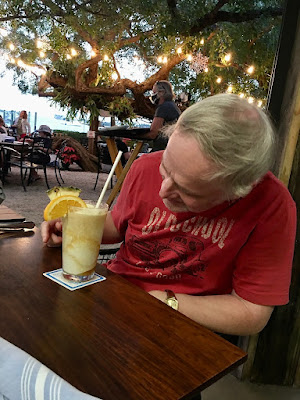 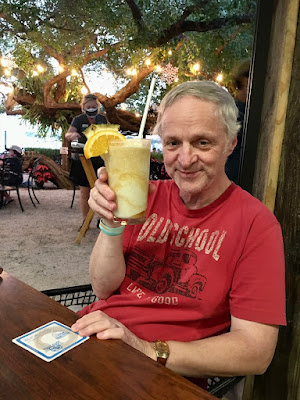 We are in Florida right now taking in some sun. Last evening we were at a restaurant for dinner and I ordered a Pina Colada. Without a doubt this was the largest cocktail that I had ever seen. One sip had me guessing that there must have been 3-4 ounces of rum in the drink. It was basically lots of rum and a little bit of pineapple juice. 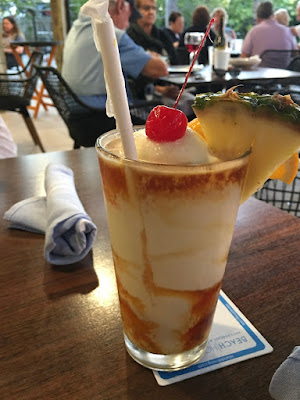 I took a few sips of the drink and decided that enough was enough because I would have to drive home that night.

If you are trying to achieve the bonhomie and relaxing atmosphere of a Beer And Pretzels type of war game, then nothing achieves this better than to have all of the players wear silly hats. My daughter and I don headgear every time we play a war game and we encourage you to give it a try.

Here are images from past Teddy Bears war game. Lady Emma is all grown up now so I really enjoy these pictures of her as a youngster.

My Miniatures Come To Life?

I don't know what the heck happened to these pictures that I have of Minden Miniatures greens. Somehow they became animated.

Kind of cool, aren't they?

The Return of the Teddy Bear Wars

Yesterday, on Boxing Day, Der Alte Fritz and Lady Emma Cuddlestone-Smythe (a nom du plume) convened at the dining room table to fight the sixth game of our sort of annual Teddy Bear Wars. We have been playing Teddy Bear war games going back to 2007 and Lady Emma is undefeated, so far, at 5 wins and 0 losses.

This year's game is aptly called "The Massacre at Bear Hollow" because You Know Who was virtually wiped out to a bear by Lady Emma's army of Brown Bears. Thus her record is not 6-0. I assure you that I did not let her win the game this time. Sound tactics and superb dice rolling led to Lady Emma's victory.

This is becoming a bit of an annual thing. I am doing worse than the Chicago Bears football team, and that's hard to do these days.

Our tale starts with the Brown Bears (in pink uniforms) and the Black Bears (in light blue uniforms) reacting to news that a huge load of chocolate coins have been deposited in the local bank: The First National Bank of Bear Hollow. Both sides were tasked with marching to the bank and "withdrawing" chocolate coins from the bank before the other side could get them.

The Bears are armed with cork pop guns so I can report that no Bears were hurt during the course of this game. If a Bear were hit, then it rolled a saving roll and needed a "6" to stay in the game. The corks in the pop guns merely put the target Bear to sleep for awhile.

So once again, Lady Emma is the winner of the Teddy Bear War Game. I must state that I did not let her win. She did it all on her own by combining skillful strategy (occupying the fortified Inn) and deadly pop gun fire. Early in the game it looked like the Blue Bears were going to have an easy time of it as they captured the Bank, but once the firing began, the Pink Bears mowed down the Blue Bears and turned it into a massacre of the Blues, alas.

Who Wore It Better?


So tell me, who wore it better; me or Callan?

How To Roll Your Dice Tutorial

So you think that you are an old hand at rolling dice in a game? Here is a breakdown of how it is done, curtesy of Lady Emma Cuddlestone-Smythe. The pictures are from our annual Christmas Holiday Teddy Bear Game, which we played yesterday on Boxing Day. Lady Cuddlestone-Smythe walks us through the six steps of dice rolling. You can employ this tutorial to improve your dice rolling and amaze your friends with the results.

Step One - The Shake.

Lady Emma employs the lesser known Left Over Right Hand shake of the dice. While the Right Over Left is more commonly used on the game table, the Left Over Right produces more top spin.

Here Lady Emma demonstrates the popular Oriental Fan dice toss method. Notice how easily she transitions from The Shake into the Fan by bringing her hands downward and then fanning her hands to the right and left, sort of like opening a fan. This causes her dice to reach maximum throwing speed which increases the spin rate on the dice. A higher spin rate improves the chances of the die pips turning up Box Cars (6s).

Step Three - The Reckoning
Lady Emma transitions effortlessly from the Toss and back into her starting position where she can begin her Reckoning move, that is, initiating the counting of the successful dice rolls. In this instance, she is spotting pips of 5 and 6 to score a hit.
Step Four - Finger Pistols
Once the tally from The Reckoning is made, Lady Emma pulls out finger pistols to signify the casualties that have occurred on the table top. Some players may prefer to use the Double Finger Pistols move and shout "Bam" "Bam" . Lady Emma is shown demonstrating the rapid fire Single Finger Pistol method.
Step Five - The Knock Out
The Knock Out step involves the knocking over the opponents casualties on the table top. Note the cheerful countenance of Lady Emma that she employs to make her opponent feel at ease. Lady Emma is demonstrating the Finger Flick Knock Out method which adds more flair to the procedure. It is also acceptable to use the Push Over or the Pick Up Off The Table ("PUOTT") methods during the Knock Out phase of the turn. We caution against the use of the PUOTT method because the opponent may prefer to remove his own figures. On the other hand, the Finger Flick method establishes psychological dominance over the opponent, which leads to demoralization and poorer performance in the war game.

Lady Emma demonstrates the Right Handed Vee signal. She notes that the advantage of using this method over other methods of displaying victory is that she can rapidly move from Finger Pistols to Victory Formation all in one motion.

Well there you have it. We all tend to take Dice Rolling for granted and assume that any old method will work on the game table. That is not the case in competitive tournaments where the player needs to gain the slightest edge in order to win, legally I would add.

Try working through the Six Step of dice rolling on your own at home or at the office (during your lunch break, of course, and not on company time). With hard practice and dedication to your craft, you too can become as good of a dice roller as Lady Emma Cuddlestone-Smythe.