Things Are Going To The Dogs Around Here

I bought this nice figure of Frederick the Great and his two greyhounds on eBay a couple of weeks ago. The figure is made by Preisser-Elastolin of Germany. I actually have two of these sets because the recent version had a better paint job than my first set. 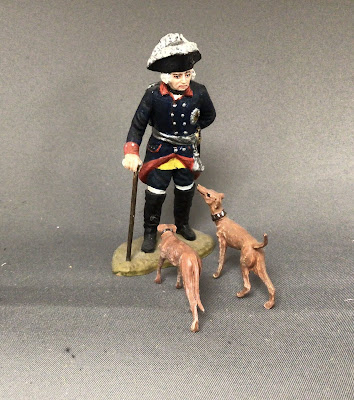 It seems that it has become popular in certain wargaming circles to add hounds onto a general's command stand running alongside the mounted commander. It's not my cup of tea, but have at it if you wish. I can only think of one historical example of a commander's dog running about the battle field, that being Prince Rupert's dog Boye during the Battle of Marston Moor. Boye didn't fare very well. He died in the battle.

I suppose that there might be more, but I can't find them.

I would think that your average hound would not like the sounds of war, you know, the explosions and all that. I think of how my dogs utterly deplore The Fourth of July holiday in the United States.  It seems that everyone in my neighborhood is firing off fireworks and my dogs do not like it. I mean they really, really, really do not like the sound of the big bang. One of our first dogs, Katie, refused to go outside during the 4th of July holiday. She would tremble in fear and dig her paws into the floor. I literally had to drag her out the door so that she could do her you know what. Based on my experience there probably weren't many dogs bounding alongside their masters who were riding to the sound of the guns.

It is more likely that a senior general might bring along a dog or two as part of his personal baggage, if he were to bring one in the first place. I could see the hounds being left in the camp as all of the soldiers marched off to the battle.

There is a story from the Seven Years War where some Austrian hussars and Croat infantry raided Frederick the Great's baggage train during one of the battles. They kidnapped (dognapped?) Frederick's favorite dog, Biche, as well as his leather bound case of maps. The Austrian general Leopold von Daun did Frederick the favor of returning Biche to him, but he (Daun) held onto the map case.

The picture at the top of this page was drawn by Carl Rochling and depicts an incident where Frederick has gone out on one of his famous solo reconnaissance rides during the Second Silesian War (1744-45). He was nearly captured by the Austrians and the picture imagines Frederick hiding underneath a bridge, waiting for the Austrians to pass on by. He holds the muzzle of his dog shut so that she does not bark and give away his hiding place. This incident appalled his generals and they implored him to not go on a recon without an escort.