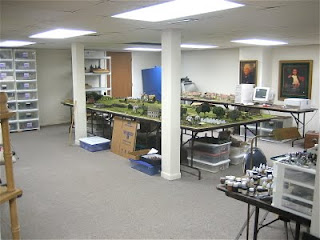 A view of the entry way into Fritz's new Man Cave or wargaming emporium.

For a long time now I have been eyeing the larger of two sections of the basement with the idea of eventually turning it into my wargame room. When we moved into Schloss Seewaldt seven years ago, I took the smaller section for my wargame room and allocated the larger part to Lady Emma Cuddlestone-Smythe for her play room. Since Lady EC-S is about to become a teenager, I thought that the time was ripe for presenting the idea of moving into the larger section to Mrs. Fritz.

To my great amazement, she said YES!

It helped that I spent my recently concluded two week vacation doing everything but wargaming and painting, so I suppose that I had built up some credits in the marital ledger. It also helped that I promised to turn the smaller, former wargame room, into a teenager pad for Lady EC-S. More about that later...

So taking the point of view that no time is better than the present, I delved into the gargantuan task of clearing out the larger part of the basement and moving all of my wargaming accoutrements into the new Man Cave. I spent about 6 hours on Saturday afternoon clearing out all of the old toys and accumulated junk and hauling much of it off to the local church, which accepts junk to sell at their annual rummage sale to raise funds. I then spent another couple of hours on Saturday night hauling all of the history books that I owned into their new quarters. If any of you have ever had the pleasure of moving several hundred books, you know what a back breaking task this can be.

So then, let's take a tour of the new digs (click pix to enlarge): 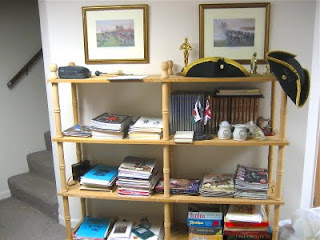 As you walk down the basement stairs (left) you enter my work bench area where I clean and prime figures and terrain bases. Behind the work bench I have now installed shelves that hold all of my collected rules, wargame magazines and "Tradition" military uniform magazines (the French version). 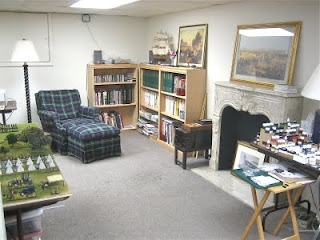 A view of the reading area complete with comfy chair, fake fireplace and tons of books. The painting table can also be partially viewed on the right. The chair belonged to my Father - it was his favorite chair so it holds some sentimental value to me. 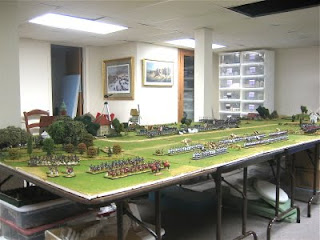 The view from the reading corner to the back wall. The white stackable plastic boxes hold much of my buildings/terrain made by Herb Gundt. I can stack 8 plastic drawers high. To the front you can see my 6ft by 15ft wargame table. I could add another 5 ft of table if necessary. There is also room for back table (2.5ft x 15ft) running parallel to the main table, to provide depth to the table for reserves. 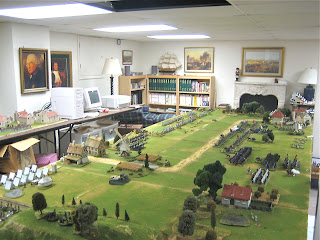 The view from the back of the room (near the storage shelves) look back towards the reading corner. You can see one of the "back tables" that run parallel to the main table. The old PC will be stored away and I can put down more terrain squares of the type shown on the main table. 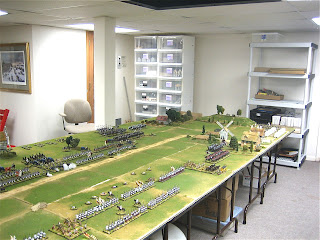 Another view of the back end of the room, providing a closer view of the stackable storage drawers (left) and plastic storage shelves (I have two such shelves, but only one is shown hear). 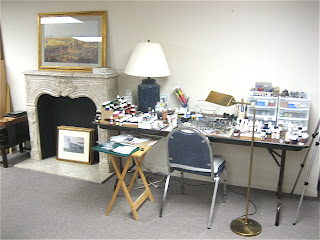 Fritz's painting table. The reading corner is off to the left and the game tables are behind the painting table. I want to reorganize the paints into paint racks so that things look a little more tidier than they are at the present.

So there you have it, my new wargame room has been completed. I still have a lot of aching joints and muscles to show for it, but the pain is worth the gain of a new game area with lots and lots of space. As noted above, I currently have a 6ft wide by 15ft long table, with two back tables running parallel to the main table to provide depth for reserves and for flank marches.

I am really pleased with the way that this project turned out. The extra space is wonderful and the lighting is much better, with overhead flourescent light fixtures. It also provides me with enough room to gather all of my books into one area for reading as well as a well-lit painting area. The ample walls also enable me to hang all of my military prints on the walls for display.

I hope that you have enjoyed this tour of the new Man Cave.
Posted by Der Alte Fritz at 9:40 PM 28 comments: 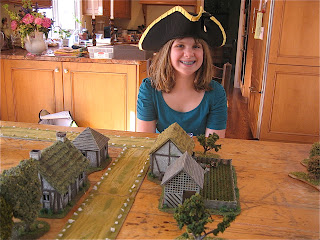 This afternoon, my daughter, Lady Emma Cuddlestone-Smythe and I (Lord Paddington Bear) decided to test our military prowess on the kitchen table. To the victor would go the M&Ms.

"We shall see Your Highness, we shall see" was the only retort that I could think of. 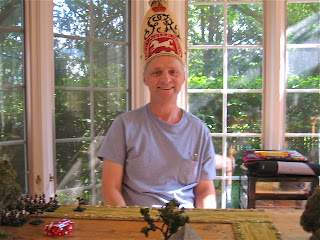 So I set the kitchen table with some terrain, including a couple of huts made by Gundt (the model maker, not the plush toy maker of bears), a few trees and some road sections in the manner shown below: 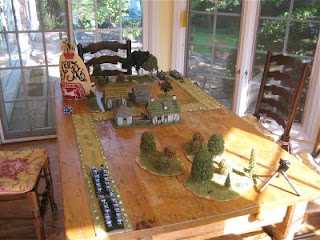 Those of you with a keen eye and an Old School way of thinking will immediately recognize this as the Bear version of the Sawmill Village scenario. Both armies enter the table in one of the corners and advance towards the village in the middle of the field. The village contains much needed supplies and vittles (in this case, M&M candies). The objective was to capture the most M&Ms and defeat the opponent in battle.
I offered Lady Emma the choice of armies, and she selected the Blue Bear force (24 figures) and I took command of the Pink Bear force by default. We rolled a D6 each turn to see who would move first and then another D6 to see who would get the first fire. The rest of the rules were very simple. Bears could walk 8" or run 12". You could run for up to two consecutive turns, but if you do so twice, then your bears would have to remain stationary for one turn to recover their breath. Shooting was done at a range of up to 12" (requiring a 5 or 6 on a D6, or 4, 5 or 6 at short range of 6" or less). Saving rolls were allowed for any bear that was "put to sleep" if the unit commander rolled a natural six on one D6 per injured bear. Any melees would be done on a figure to figure contact with each player rolling a D6 (with a +1 pip for a leader) and the higher die roll winning the individual combat. 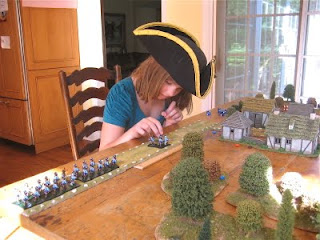 Lady Emma marshals here Blue Bear army and marchs them down the road towards Sugar Town, in search of snacks. 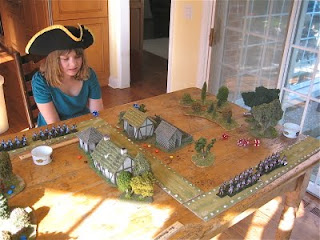 Both forces march toward Sugar Town looking for snacks. 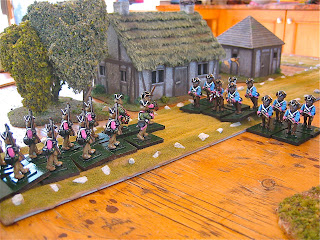 Uh oh! The veteran Pink Bears get caught in column by the Blue Bears, who have smartly deployed into line. Our rules allow two ranks to fire and Lady Emma won the first fire initiative with a higher die roll. 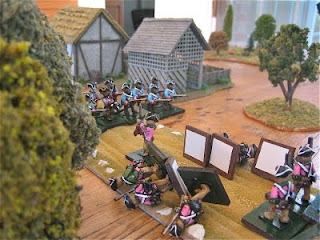 Things are off to a bad start for Lord Paddington Bear's Pink Army after the first firing of the game. 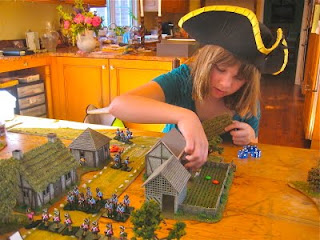 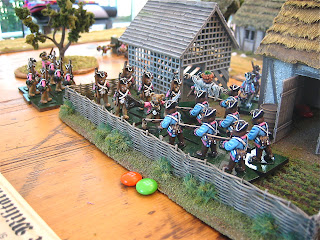 Our first melee in the garden of one of the homes in Sugar Town. Care to guess who won? 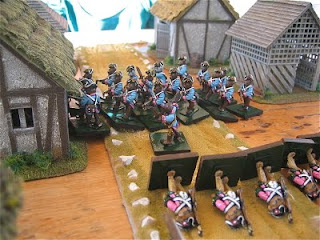 The remnants of the Pink Bear force hole up in one of the houses, which happened to be filled with M&Ms. This attracted nearly every Blue Bear on the table as they stormed the house and attempted to break down the door. The Pink Bears held the door for two turns before succumbing to the Blue Bears. 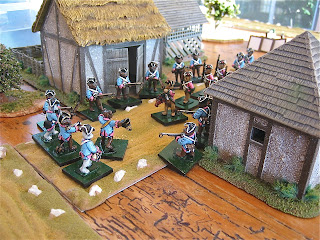 The Pink Bear army surrenders and is accorded honors of war. They march smartly out of Sugar Town between rows of Blue Bears. 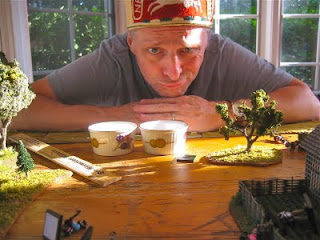 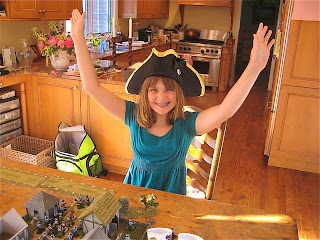 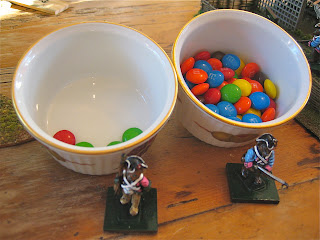 The Spoils of Victory. Each side placed any captured M&Ms into their own ramikin. The side with the most M&Ms at the end won the game. You can see that it was a very lop-sided victory in favor of the Blue Bear Army.

Now some of you might think Lord Paddington Bear let Lady Emma Cuddlestone-Smythe win, and you would be far from right. She won nearly all of the first fire initiatives on each turn -- my die rolling wasn't very good -- and I got clobbered in the garden melee and the break in of the supply house.
I am looking forward to avenging this loss in a rematch very soon. Stay tuned for further battles in the legendary Teddy Bear Wars.
Posted by Der Alte Fritz at 10:44 PM 25 comments: 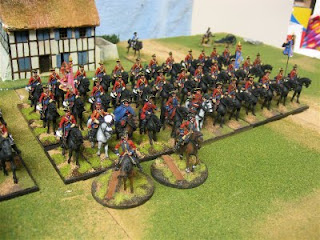 The British cavalry is more noted for their lack of participation at Minden; nevertheless I thought that you would enjoy this picture of some Suren British Horse.

I almost missed the fact that today is Minden Day, i.e. the anniversary of the great British/Hanoverian/Hessian/et al victory over the French.

That being said, I did nothing particularly special to celebrate the anniversary, but I did prime two dozen Minden Austrian Dragoons today and will probably start coating them in red coats tomorrow. Yes, I've decided to choose one of the Austrian dragoon regiments clad in red.

I received my copy of Charles S. Grant's "Wargaming in History, Volume 4" today and that has temporarily derailed my painting aspirations, as I would much rather tuck into his book than I would to paint figures. This looks to be the best of the series yet, from first glance, with a noticeable increase in the number of color pictures and a nice pictorial from Bob Marrian that focuses on 18th Century hussars. Grant covers the battles of Hastenbeck, Rossbach and Leuthen (oooh, good choice, especially the latter one) as well as some background on his own Vereinigte Frei Stadte army that I found interesting from the standpoint of how to put a wargame army together. Finally, it covers the development of hussars and concludes with some information on Hadik's Raid on Berlin in 1757, with some ideas on how to wargame the event.

I promise to come back with a more thorough review after I have had a chance to read the book in detail. Sorry paint brushes, you will be going unused for the next couple of days. I have a book to read. :)
Posted by Der Alte Fritz at 7:57 PM 3 comments: