Whilst working on my 54mm Sudan Project, I was doing some research on the river boats that were used during the attempted rescue of General Gordon in Khartoum (and also researching Kitchener's fleet of Nile Rive gunboats in 1895-96) and found this interesting web site.

The purpose of the Melik Society is to advance awareness of Anglo-Sudanese history in the period 1883-1956 through the restoration and preservation of the river gunboat Melik and the paddle steamer Bordein.

The Melik served in the campaign to capture Omdurman and Khartoum by Kitchener in 1896 and it continued on active service up to 1926, when the boat was retired and leased by the Blue Nile Sailing Club as its club house up through the 1980s. The gunboat was also used in the 1938 film, The Four Feathers, directed by Alexander Korda.

I encourage anyone with an interest in the 19th Century Sudan campaigns to click on the link to the Melik Society and scroll through the available information and pictures. It is well worth your time.

I do not know whether the preservation efforts for Melik and Bordein have gathered any steam of late and it would be interesting to find out if the projects have made any progress.

Showdown With Some Cossacks

The is a story about the demise of the ill-fated Prussian Jager regiment at the hands of some Russian Cossacks near Spandau. The following excerpt comes from Kronoskaf's history of the Prussian Jager zu Fuss;

In 1756, the unit took part in the invasion of Saxony and was present at the blockade of Pirna between September 11 and October 16. On December 1, the unit received a reinforcement of 46 men.

On February 5 1757, the unit was organised into two companies. On March 1, it received a further reinforcement of 3 officers and 100 jägers; bringing its total strength to 300 men. On November 22, the unit took part in the Battle of Breslau where it was deployed en potence to protect the right flank. On December 5, at the Battle of Leuthen, the unit was deployed on the left in the first line of the infantry centre.

In the Spring of 1758, the unit took part in the invasion of Moravia and, from May to July, in the Siege of Olmütz where it was deployed in General Mayr's Brigade, on the opposite bank of the Morava to cover the road to Silesia. During the retreat from Moravia towards Silesia, the unit was attached to the rearguard and took part in several actions. On October 10, the unit took part in the Battle of Hochkirch where it was initially deployed in Manteuffel's Corps, in the village of Lauske, on the extreme left flank of the Prussian positions.

On October 10 1760, the unit was decimated by the Russians at Charlotteburg.

In 1761, a new unit of 4 companies was raised in Berlin and Wittenberg.

On July 21 1762, the unit took part in the Battle of Burkersdorf where it was posted on the right wing in the woods to the south-east of Hochgiersdorf.

I set up a vignette of this action on my game table, but the outcome was substantially different. As Bugs Bunny would say, "aren't I a little stinker?" The Russian Cossacks are RSM figures that I have mounted on Minden light hussar horses. This demonstrates the complete compatibility of RSM and Minden figures. The Jagers are Minden figures, of course. In this instance, the Jagers have managed to retreat into the somewhat questionable light cover, but will it be enough to stop being skewered by the Cossack's lances?

In this instance, the cavalry rides to the rescue in the nick of time. The Prussian Ziethen Hussars (H2) have emerged from behind the woods and have caught the Cossacks in the flank. It's a trap!
But wait, there's more! The Bosniaken lancers also come out of hiding and hit the other flank of the Cossacks , who are likely doomed (he, he, he, he).
The Bosniaken were often brigaded with the Black Hussars during the Seven Years War. Click the link below to view the Kronoskaf history of the Bosniaken.
Bosniaken

I plan on moving more Bosniaken up near the top of my painting queue because I only have one squadron of 12 figures and normally have two 12-figure squadrons in my cavalry regiment. My Ziethen Hussars are in the same position so they need 12 more figures in their regiment.

The painting mojo ebbed away at the conclusion of the Sudan Project battle a couple of weeks ago. It is not easy painting 28mm figures after painting the larger 54mm plastic toy soldier figures nonstop since March 2020. I am forcing myself to work on some Prussian infantry and power my way through the painting wall. I figure that the more 28mm figures I paint, the sooner the painting mojo will return.

So here is what is in the painting queue at the moment. These are units that are either primed or partially painted:

I pulled my large Nile River gunboat out of storage today and set it up at the dock in my Khartoum static display at home. The boat measures about 20-inches long and has a beam of 6-inches. The boat is made by Wm. Britain’s. It is out of production but you can still find them on eBay and at some of the toy soldier dealers across the country. 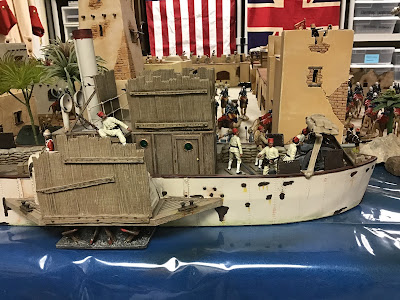 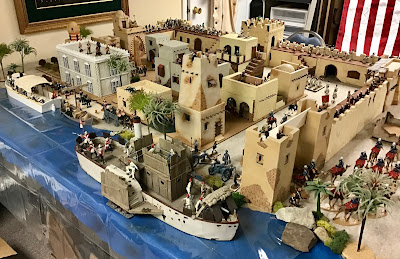 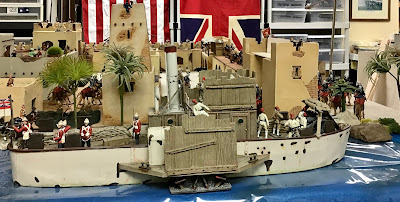 This past weekend, on September 26, 2020, we gathered at the barracks of Major General Pettygree and played our version of the Dervish assault on the city of Khartoum during the Mahdist Uprising in 1884-85. We used the 19th Century variount of Bill Protz's "Battailes dans l'Ancien Regime" (or B.A.R. for short) for our game. Our gaming group has a strong familiarity  with the BAR rules and the rules' mechanics are easy to adapt to other historical periods. We use BAR variations to fight the Jacobite Rebellion, Napoleonic and 19th Century Colonial battles. Thus anyone in our regular group already knows the mechanics of how the movement, shooting and melee systems work.

The Sirdir Himself, the Honorable Major General William Augustus Pettygree has provided an excellent piece of game background on his blog  Back To Khartoum and recently followed up with his version of the events of this game Khartoum Battle Report. Both blog articles are well crafted and fun to read so I recommend that you click on the links to Bill's blog and give them a read. It will provide context to my pictures on this blog.

Once a year, usually in the Fall season, we stage our big Colonial wargame with anywhere from six to twelve players and lots and lots of well painted and colorful 28mm British, Indians and Egyptians versus various natives in either the Sudan or on the Northwest Frontier. This year we decided to stage an assault on the town of Khartoum by the Mahdi's Dervish army.

The game was actually broken down into three seperate, but connected, games within the overall game. The central game revolved around the Dervish attack on Khartoum; the second game featured the British and Egyptian relief force marching to Khartoum; and the third game was a smaller skirmish affair involving the rescue of Mrs. Pettygree from the Dervish menace.Due to social distancing protocols we decided to limit the game to four players. The Khartoum garrison was commanded by Chuck the Lucky and me. The Dervish were commanded by Earl K. and Bill P. We switched sides to play the relief column game, but time ran out before we could play the rescue Mrs. Pettygree game.

Game One - Assault on Khartoum

Major General Charles Gordon, commander of the Khartoum garrison, had five companies (16 figures plus one officer per company) of Egyptian-Soudanese troops and two heavy Krupp cannon for his defense of the city. He also had one Nile River gunboat, but this had been dispatched up river to accompany the British Museum's archeological dig of pharaoh Rutin Tutin III's lost tomb. Mrs. Pettygree and friends were part of that expedition .

The Mahdi brought a force of approximately 300 foot soldiers to attack Khartoum. Another Dervish army of 30 cavalry and 120 Beja tribesmen were posted in the rear areas to keep a watch for any British relief column that might appear (more on that later).

The game ended with the arrival of Major General Pettygree's relief column of Egyptian lancers and the British Camel Corps. The Egyptian lancers charged the Beja foot twice and were twice repulsed. So their commander decided to leave things well alone and shadow the Beja instead of attacking them.

The Beja holding force of two tribes on foot and a collection of cavalry/camelry had no firearms, so when the Camel Corps deployed, the Beja had no choice but to fall back out of rifle and Gardner Gun range.

Meanwhile, inside the walls of Khartoum, the Beja command had fought a ferocious battle with the Sudanese regulars and were badly mauled. The Riverine Arab command fared better and had nearly wiped out their Egyptian foes. However, the Riverine Arabs had suffered enough casualties to force a "fall back" die roll on a D6. They still had a lot of fight left in them, but deemed it pointless to continue the battle.

So General Gordon barely hung on to the city and he was saved by the arrival of Major General Pettygree's relief force.

The game was played on one long table measureing 24 feet by 6 feet. We did not have need of the two side tables that were available, given that most of the action was on the vertical axis of the table, rather than on the horizontal axis. We all had a fun time playing the game, Colonial games lend themselves to having fun no matter which side one plays on. We used the BAR rules up until the Dervish were scaling the walls and getting into individual hand to hand melees with the Egyptians, at which point we switched to a more simple system of melee using D6 dice.

What will next year bring in Toy Soldier Land? Perhaps Rorke's Drift?
Posted by Der Alte Fritz at 1:55 PM 13 comments:

The Sudan Project is winding down and I wanted to get some SYW troops onto the game table. So the table was cleared of Khartoum (which was actually moved to its own 6ft by 7.5ft table) and Dervish figures; and then I set out all of the figures in my Minden Miniatures SYW Russian army.

One good reason to display all of the units in a particular army in your collection is to see what might be missing and require painting. The Russian parade made it apparent to me that I needed to add 1 to 2 Observation Corps musketeer battalions, one battalion of Russian grenadiers in summer waistcoats, 1 to 2 more battalions of line musketeers wearing waistcoats and a similar number wearing green coats. And finally, the cavalry inspection revealed that the second squadron of the Yellow Hussars needed to be painted. A few more 3-pound battalion guns would look nice too.

It looks like I have my work cut out for me over the next several months.