We received some of the proofs of a series of pictures that we had taken of the Princess and I just wanted to post two of my favorites on my blog. The first one shows our hound in what I call "Classic Golden Retriever Pose" smiling right into the camera with tongue hanging out. In the second picture below, Tiberius decides to ham it up a little bit lay a smooch on Lady EC-S's cheek.


These pictures will undoubtedly find their way onto Facebook in the near future.

Jonkopings Regiment in the GNW 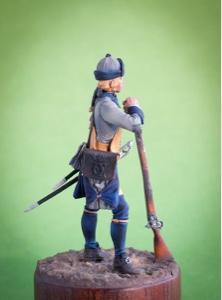 I received some more metal reinforcements from Warfare Miniatures last week, enough to paint a Swedish regiment wearing the karpus headgear and probably another karpus and a tricorn battalion plus 18 more cavalry. 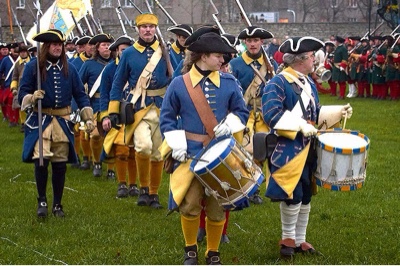 So last evening I broke out the figures and assembled 32 infantry in karpus for the Jonkopings regiment. This unit has red facings, waistcoat, breeches and karpus brim, so it should add a bit of color and variety to my growing GNW Swedish army.

The Warfare figures require a modest amount of assemble before priming. In this case, I only had to attach scabbards to the rank and file, a few pikes, and some pole arms for the officers. I've gotten to be an old hand at this by now, so it is a simple matter of kneading some green epoxy putty together and inserting a tiny ball of putty into the hole that places the scabbard in place, followed by a dab of glue and then presto bingo they are done.

Tonight I will glue the figures to temporary card bases that hold the figure whilst painting. That will be followed by a coating of grey primer and then I will have a battalion set aside and ready for painting when the mood and my painting schedule allow. I want to finish 12 more Minden Prussian Cuirassiers before switching back to GNW Swedes. I like the variety of going back and forth between the two periods and two different styles of miniatures. I might also assemble 18 more Swedish cavalry to bring the Ostgotland Kavalrie regiment up to its full complement of 36 horse and riders. Since a Swedish army can have as much as 50% cavalry, I need to get ahead of the cavalry painting before I get too far along with the infantry.
Posted by Der Alte Fritz at 7:58 AM 6 comments:


Here are pictures of IR22 Prinz Moritz regiment in the Prussian army of the SYW. The complete regiment enters service in my army today, October 19, 2015. I now keep an army log for my SYW armies that includes a picture of the regiment and its flags, date of service, and eventually, a battle history.

The regiment's inhaber was always a prince from the Anhalt Dessau family, going back to Prince Leopold, "the Old Dessauer". Prinz Moritz was one of his sons ( he might have been the one son that was the subject of an experiment conducted by Leopoldo - he received no education because Leopold wanted to see how much he could learn on his own, without the aid of any teachers).

Coincidentally, the Minden range added a Prinz Moritz personality figure and you can see him on the round stand in front of the regiment. He is wearing his orange Order of the Eagle Sash across his left shoulder.

The figures are the Prussian infantry with the tighter Prussian cuffs (MP-001 and MP-002) and this is the first time that I have used the Prudent cuff figures in my Minden Prussian army. When Frank Hammond produced the original Prussian figures, they only came with the larger Swedish cuffs.

The flags are from GMB Designs, as is customary with me.

If you scroll to the bottom of the page you will see a teaser photo of the first squadron of the CR2 Prinz von Preussen Cuirassier regiment. I will start painting the second 12-figure squadron this week. I'm awaiting flags from GMB to complete the presentation of the regiment's colours.

Last evening I was looking at my Austrian and Prussian armies, which are facing each other across my game table, and I realized that with the recent addition of some Saxon cavalry, my Prussians are going to be outnumbered. We we can't have that.

I think  that I will start with the yellow coated KR2 Prinz von Preussen regiment. The Gensdarmes regiment - KR10 - was usually brigaded with KR13 Garde du Corps, and since I already have the latter regiment, then KR10 would be a logical addition as well.

This morning I cleaned and primed the first dozen Cuirassiers for the Prinz von Preussen regiment. I think that every collection of SYW Prussians probably includes this regiment because of their distinctive yellow coats. With a long three day weekend ahead of me, I ought to be able to make good progress on the painting front, so be sure to check back here over the weekend for painting updates.
Posted by Der Alte Fritz at 7:44 PM 10 comments: 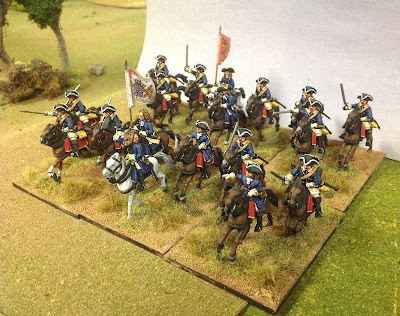 I finished off the basing and flagging of the Ostgota Kavalrie Regiment for my GNW Swedish army last evening. Both the figures and the flags are from Warfare Miniatures and their Great Northern War range of figures.

I used Citadel Scorched Grass static grass and The Army Painter tufts (Highland, Wasteland and Winter) on the bases. The ground was made using spackle compound, slathered over the base, and then dipped in a tub of fine railroad ballast. Once dry, I drybrush some light tan on the ballast before adding the tufts and the static grass. I use mostly the Highland tufts, which offset the static grass color nicely. The Wasteland tufts are dark green and provide some contrast. The Winter tufts are too light in color so I don't use much of those.

Reinforcements have been ordered and are now making their way across the Pond.
Posted by Der Alte Fritz at 1:22 PM 9 comments:

Saxons Are Based Pix

Here they are with the basing completed.
Posted by Der Alte Fritz at 7:18 AM 11 comments: