I seem to be on a painting roll of late as I get ready for our next SYW game on December 14, 2013. We are going to use the Batailles de l'Ancien Regime ("BAR") rules using a figure ratio of 20 to 1. This translates into infantry battalions of approximately 30 figures and cavalry regiments of 24 to 32 figures.

The incentive of an upcoming game seeems to have my brushes flying at full speed: last week I completed the 2nd battalion of the von Diericke Fusiliers (IR49) and this week finds me completing the 2nd Battalion of the Leib Guard (designated as "IR15/II). The second battalion of the Guard all wore tricorn hats (save for its grenadier company - silver front plates and red mitre bags) and the third battalion all wore grenadier mitres (silver front plate with yellow mitre bag). Regardless of what head gear they wore, all three battalions of the Leib Guard were considered to be grenadiers.

The first battalion was largely a ceremonial unit, having only fought at the Battle of Kolin in 1757. It remained in Potsdam for the remainder of the war and it had a rather ornate, gaudy uniform with tons of silver metallic lace. One of these days I might commission Richard Ansell to make the first battalion of the Guard.


Minden Miniatures does not yet have a specific "Guard" figure in the range, however, the figures with the large Swedish style cuffs are perfectly suitable for the job. Really the only thing that is missing, that would make them Guard uniforms, is the aigulette (shoulder knot) on the right shoulder. I found that I could render a suitable substitute by "converting with paint", i.e. painting the aigulette onto the figure.

Next on the painting docket: the third battalion of the Leib Guard. I will use the Minden grenadier figure with Swedish cuffs and do the same aigulette conversion. I should have enough time to get the third battalion done in time for the December 14th game.

Why are you painting guards, you might ask. Because it is my own Prussian army and I like the way that the Guards look, and I can paint whatever I please for my own army.  It is my hobby, my diversion from the hectic pace of Life and it brings me enjoyment and happiness to paint the Prussian units that I want in my wargame army. Isn't that reason enough?


Over the weekend, I finished painting the second battalion of the IR49 von Diericke Fusilier Regiment in Frederick the Great's Prussian army. The organization of my Minden Miniatures armies is to paint two battalions of each regiment that I have in my army. I painted the first battalion of the regiment several years ago and only got around to adding the second battalion. The flags are from GMB Designs and the figures, of course, are Minden Miniatures. Each regiment of two battalions also has a mounted regimental officer. I use 30 figures per battalion or approximately a ratio of 1:20 figures to actual men.


I am working towards painting enough Minden Austrians and Prussians to run a Lobositz wargame at the next Seven Years War Association Convention in South Bend, Indiana at the end of March 2014. I may also bring the same game/scenario with me to Historicon in 2014.

I currently have 10 battalions of infantry in each army (Austrian and Prussian) and will need about 4 regiments of cuirassiers and dragoons for the cavalry contingent. I will be using the scenario that Charles S. Grant wrote of in his book, "The Wargame Companion".

The shipping department of Fife & Drum/Minden Miniatures has been very busy packing orders for customers all over the world including Australia, Austria, Germany, Spain, United Kingdom and Canada. In fact the sales have been so brisk that I had to reorder a lot of stock, so the shelves are currently brimming with inventory ready to ship.

Oddly enough though, there have been very few Minden orders from customers in the United States. So I thought that I would re-announce the fact that we now stock both ranges here in the United States and that in most cases, I can ship US orders the next day.

I have been experimenting with a flat rate shipping charge of $4.00 for all domestic US orders and $10.00 for all International orders, regardless of weight and cost. I am now extending this offer through the end of 2013, having previously indicated that this program would only run through November. So flat rate shipping will continue through at least December 31, 2013.

I have been experimenting with a Garde du Corps cuirassier regiment for the Kingdom of Hesse Seewald. I have always thought that they Prussian Garde du Corps would look pretty nifty if they sported a red kollet (coat) rather thant the tradition buff colored kollet. You can see the results in the picture above. click the picture(s) to enlarge the view.

I have been painting the odd figure here and there of my proposed Hesse Seewald Garde du Corps whenever I want to take a little break from other painting projects. The idea is to paint the figures as Prussian Garde du Corps wearing their red galarock coats instead of the buff kollet. I rather like the way that they turned out. Eventually, there will be a single squadron of 12 figures in the unit. 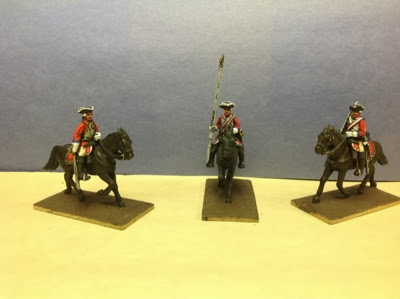