The Decline of the Oblique Order

I have been perusing Christopher Duffy's "Army of Frederick the Great"(second edition, Emperor's Press, 1996) lately and wanted to post some interesting observations that Duffy has on the evolution of Fredrician tactics over the course of the Seven Years War (pages 225 to 227). I think that it is a good idea to have a basic understanding of the tactics that Frederick used throughout the Seven Years War. Most of the following verbiage is taken directly from Duffy (and in some cases abbreviated or paraphrased by me).


The Oblique Order  Style of Attack
Until the advent of Frederick II of Prussia onto the scene in 1740,  the typical 18th Century battle formation was a long line of infantry regiments, with a second or third supporting line, with cavalry posted on both flanks of the army. Battle became a head on attack and battle of attrition, until one side had enough and had to retire. It was a costly way to conduct battle (in terms of casualties) and so Frederick looked for a way to achieve a more decisive victory with a lesser expenditure of manpower.

Frederick was a student of history and undoubtedly had read about Battle of Leuctra in 371 BC in which the army of Thebes attacked  one wing of the Spartan army and achieved a convincing victory. He most certainly found more commentary and analysis on the topic in his readings of military history and so the oblique order had made an impression on him. Frederick employed the oblique order with great success in 1745, first at Hohenfriedberg on June 4th and again at Soor on September 30th. By the start of the Seven Years War in 1756, Frederick had used the oblique order enough times to establish a trend in the minds of the Austrians, so they were aware of its use even before the first shot of the war was fired.


Duffy summarizes the key elements of the Oblique Order style of attack:

"1) The march to win the enemy's flank or rear was a taxing affair, which began in the early morning at the latest, and was prosecuted with all possible speed for a dozen miles or more. Woods (Zorndorf, Kunersdorf and Torgau) or darkness might well screen most of the movement from the enemy.

2) When, as usual, the ground and the hostile dispositions were unknown to Frederick in any detail, he halted within sight of the enemy to make a personal reconnaissance and for a plan of battle.

3) The plan was communicated verbally to the senior commanders and selected adjutants from some convenient viewpoint. Frederick commonly expressed himself in general terms, leaving the detailed means of execution to the generals. He was assured that his intentions were understood perfectly. (Then) the generals and adjutants dispersed, and the march was continued or the attack opened as necessary.

4) An advance force was employed variously to clear the way, deceive the enemy, spearhead the attack, or do all three things together.

5) The main attack was launched against the targeted wing by the advance guard or leading division, supported by one or more lines of infantry, the massed fire of forty or more pieces of artillery, and by a flank guard of cavalry.

6) The rest of the army was "refused", reaching back obliquely from the attacking wing in a staggered echelon of one regiment  or battalions at a time, each unit between twenty and fifty paces to the rear of its neighbor. The purposes of the refused wing were to fix the enemy in their positions, and form an unengaged reserve which Frederick used to exploit a victory, or cover the retreat in the event of a reverse."

"By the middle of the Seven Years War the Oblique Order was losing much of its potency. There were probably five main reasons:

1)  The Austrians and Russians had by now acquired a complete and detailed knowledge of the tactic in question and were learning to apply effective counter measures. They became skillful at changing their fronts to meet unexpected attacks, they formed mobile reserves, and their formidable artillery made the Prussian assaults increasingly costly.

2)  The quality of the Prussian troops underwent a marked decline, accelerated by the fact that Frederick  was now losing about 30 percent of his effectives every time he committed his army to battle.

3)  In these circumstances the long and arduous approach marches demanded too much of the army. It was difficult to bring up the supporting artillery (as in the latter stages at Kunersdorf and at Torgau) and the troops began their battles when they were already exhausted.

4) Frederick's reconnaissance and briefing imposed a delay which was now unacceptable.

5) The deployment of the army for attack was rigid and geometrical. "


The Austrians developed a new style of attack, using converging columns (often mixed with infantry and cavalry units) designed and timed to attack the Prussian army at multiple parts of its battle line. The first, and most successful, use of this tactic occured at the Battle of Hochkirch on October 14, 1758. The result was the near destruction of Frederick's army. The tactic was employed again at Maxen, on November 20, 1759, in which the Austrians bagged an entire Prussian corps commanded by Finck.

Prince Henry adapted the new Austrian style of attack at Dobeln on May 12, 1762, capturing 2,500 men. He applied the method on a larger scale at Frieberg on October 29, 1762 with greater success, in what turned out to be the final battle of the Seven Years War. 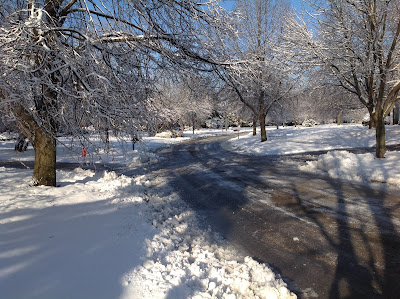 Winter came early to Hesse Seewald this year. We received about 7-9 inches of snow on Saturday and it seemed like it would never end. However, in the light of a sunny day, the snowscape does have a certain beauty to it, as seen in these two pictures of my street. That said, I would still rather the snow wait until after Thanksgiving. 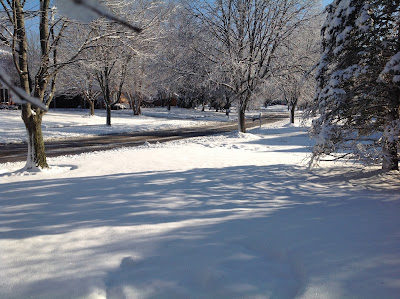 My painting mojo seems to have gone on vacation, perhaps to warmer climates, so now seems like a good time to catch up on things such as basing already-painted figures and packing Minden figures into individual bags.

I have a battalion of 32 GNW Russians (from Warfare Miniatures) sitting on my painting table right now, and while they are gorgeous looking castings, I can't seem to get up the resolve to start painting them. Maybe with a four day weekend coming up for the Thanksgiving holiday, there will be enough spare time to get my painting groove back. On the otherhand, after seeing how the figures look painted, curtesy of the talented brushwork of Barry Hilton, I might have to get the green paint out and give them a go.

Click on the link below to visit the Warfare site:

I did a little sketch and recap of the forces that I will need for my Kolin game at next year's SYW Association convention and find that I am fairly close to having everything that I need. I have some Hungarian infantry and Croats coming from my contract painter, Alex Akers (who is also my nephew) and that should pretty much finish off the Austrian needs. I might add an extras 12 figure squadron to the two Saxon cheveauleger units that I painted earlier in the year.
Posted by Der Alte Fritz at 2:05 PM 3 comments:

I finished the second squadron of CR2 Prinz von Preussen Cuirassier regiment (12 figures per "squadron" and two "squadrons" per regiment in my organization). The flags from GMB Designs were attached a few minutes ago, which means that the regiment is officially enrolled in my Minden Miniatures army.

I use a 1:20 ratio of figures to men so my cavalry regiments are a bit under strength at 480 troopers. I really should have 32 to 36 figures per cavalry regiment which would yield 640 to 720 troopers in the regiment. Prussian cavalry regiments largely had five squadrons. If  I had five squadrons then I would need to have 6-7 figures per squadron and a 6-figure mini-squadron just does not have the visual appeal that I am looking for. So I went with 12 figures as this looked right to my eye and 24 figures was enough figures to paint as far as I'm concerned.
Posted by Der Alte Fritz at 2:27 PM 9 comments:


I completed 24 of the 32 figures for the Narke-Varmland regiment for my Swedish Great Northern War (GNW) army. The figures are from Warfare Miniatures as are the flags. This is my first regiment using the figures wearing the karpus hat or cap with the colored brim. The regiment also has distinctive  red stockings and facing colors rather than the traditional Swedish yellow. I will probably paint the Jonskopings regiment next because it also has red facings and stockings (but wears a tricorn). This way, I will have a "yellow brigade" and a "red brigade", each of two regiments.

I still have one more stand of six figures to paint in order to finish the regiment. However, 24 figures gives you a good idea of how the final regiment will look upon completion.

Warfare Miniatures announced yesterday that its first GNW Russian figures will be arriving this week! I am really looking foreward to order 4 regiments worth of the Russians and getting that army started. Of course, I will need twice as many Russians as Swedes, so there is a lot of painting still to come.