I finished the British 44th Regiment of Foot over the long Memorial Day weekend. These lads have been sitting on my painting table since last December and I feared that I had lost the motivation to paint any more AWI figures for awhile. But then I remembered that I need to add three more British regiments of foot to use in my games at Historicon this summer, so that was motivation enough to get my AWI Painting Mojo going again. One down, two more 32 figure units to go!


I even use a few Perry Miniatures in my AWI collection, particularly for the cavalry that I don't have yet in my own Fife & Drum Miniatures range of figures. I needed one regiment of British cavalry for my Historicon scenario, so I went with the Perry 16th Light Dragoons. The same unit will probably be next in the queue with regard to new additions to Fife & Drum this year. Yes, British dragoons and American dragoons will be the next items that we add to the range. Once the cavalry are in the stable, then we will have all three combat arms available in the AWI range.

This is only the beginning though, or rather, the end of Phase I (creating all three combat arms in the range). Phase II will see the expansion of the range into other troop types such as Highlanders and Hessians as well as a few other surprises down the road. There is also a Phase III in our master plan, but let's get phases I and II nailed down before I talk about that in any detail.

I was visiting some of my favorite blogs last night and you know how it goes, one page seems to lead you to a link to another page that you hadn't seen before and suddenly, you discover something amazing.

I stumbled upon the most amazing wargame room that I have ever seen, bar none. And believe you me, I've seen a lot of great rooms, but this one has to be at the top of the list. 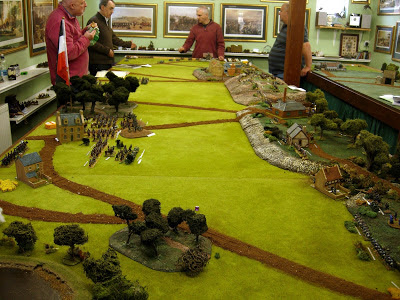 Now the terrain itself really blows me away too, as do the multiple tables using the "aisle" concept of adding depth to a standard 6ft wide wargame table. All of the table have a green drape that hides the underneath portion of each table. Very classy! I half expect to see a butler, clad in tails, serving the gamers' every need. 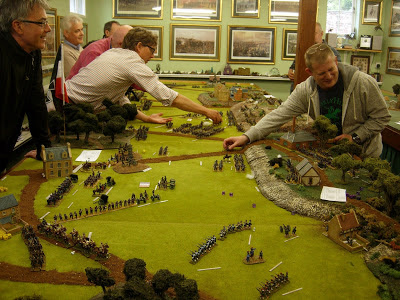 Perhaps the most amazing thing about this set up is that it appears to be in its own self contrained building, as shown below. This is the Downton Abbey of personal wargame rooms.


The other day I was looking for some SYW figures on the Minden Miniatures web site and I started to think, "Wow, Frank has sure added a lot of figures to the range since he started this venture."

So I started counting the number of figures within each country and came up with the figure 229. This does not include the next batch of 16 figures that are about to go into production. The break down is:

That is very impressive, to my way of thinking.

I was looking at one of the wounded horse castings in the Minden range when I happened to notice that there was some sort of inscription on the bottom ( the flat underside) of the casting. Taking out my magnifying glass, I was able to read the following message:

"Help Frank Has Me Locked In His Basement."

That really gave me a good laugh. :)

For a limited time only, I am offering painted and based Fife & Drum artillery sets (four crew and one cannon) for $55.00 plus shipping.

The British come as either Loading or Firing (both with British 6-pdrs).

The Americans come as either Loading or Firing, but you can select any of the following cannon: Swedish 4-pdr, French long 4-pdr , or British 6-pdr. The French 4-pdrs were often rebored in American  foundries  and converted into 6-pounders, while the Swedish 4-pounder was another French gun of lighter size (a la Suedoise).

I can also offer a Galloper Gun set (four crew, 3-pdr, horse and limber frame) for the same price.

If you are interested in any of these painted and based sets, then drop me an e-mail at:

The proceeds will be used to fund the next releases of Fife & Drum artillery equipment, which should be available within two weeks.

I thank you in advance for your support.
Posted by Der Alte Fritz at 11:35 PM 2 comments:


Here is a short post to show a picture of some commission work that I just finished last weekend. They are Minden Miniatures Prussians painted as IR24 von Schwerin Regiment and the flags are from GMB Designs. The regiment is mounted on 3/4-inch square Litko bases. I just painted the bases dark green as a temporary expedient as the client wishes to finish the terraining of the bases himself. This is a classic Prussian regiment with white small clothes and red facings on the typical Prussian Blue uniform coat.

I am currently working on a British AWI regiment (44th Foot) and should have it completed within a couple more days. Pictures to follow in a few days.

I have to say that the news I am reporting "made my day" when I first heard of it. I opened up the Emperor versus Elector blog this afternoon and scrolled down through the list of some of my favorite blogs, when I spied "Classic Wargaming" by Phil Olley. There are a few blogs that I put in my "stop everything and read now" category, and Phil's is one of those. Imagine then my delight when I read Phil's announcement about the pending publication of a book by John Ray. I have been anticipating the publication of John's book, illustrated by pictures of his own unique figures, for some time now so it goes without saying that I am very excited by this news:

If you click on the second link above, to John Ray's new blog site, called "A Military Gentleman", you will have a better idea of what I am talking about. The site is named after the pending book of the same name.


John has been working on this book for about seven years, and every so often he would give us a glimpse of the scope and quality of the project by publishing a few pictures on various internet forums or in some of the wargame publications. I have been looking forward to the publication of the book with a great of anticipation over the years, knowing that it would be illustrated with many pictures of the wargame collection that John has sculpted entirely by himself.

According to the link, the book will have about 300 pages and a gallery of over 100 pages, chock full of the wonderful creations of John Ray. It will have a limited print run of 500 copies, so if you are a kindred spirit with me, i.e. a member of the John Ray Fan Club, then you will want to visit the site and click on the e-mail link to express your interest in purchasing a copy for your own library.

I have been a long time fan of John Ray's sculpting talents and his ability to focus in on one historical period. John learned his sculpting trade via his friendship with the late Steve Hezzlewood, who many of you know through his work on the RSM Miniatures line of 18th Century figures. I can't recall when I first saw John's work, it was probably in an old issue of Wargames Illustrated when I saw pictures of his Zulu War and AWI collections. When I saw the latter collection, my first thought was "I didn't know that RSM Miniatures made those figures?". It was only later that I learned that John had sculpted the figures for himself and that he was building up a large AWI collection.

Imagine that you have the talent to sculpt wargame figures. Then imagine that you could have any figure that you wanted, just by collecting some copper wire, a soldering iron and some epoxy putty or Milliput. Well, that is what John Ray can do.  One of his trademarks is the vignette. John draws inspiration from historical military art prints and then recreates the scene in 28mm figures which grace his wargame table. Over the years, I have been following his AWI project with great interest and watched as this evolved into a wider hypothetical European war that might have taken place during the 1770-1789 period. John built Hessian, Prussian, French, Spanish, Austrian, Russian, Ottoman Turks and probably a few countries that I have missed.
Posted by Der Alte Fritz at 7:23 PM 6 comments:

Here is a picture showing how I organize my artillery train for my AWI armies. Each cannon model has its own limber with a team of two horses and a driver. The cannon model attaches to the rear, loosely and then is placed on the artillery stand when it goes into battery. Once the gun goes into battery, the gun model is placed on the artillery stand (which includes four crew members permanently attached to the base) and then it is set to fire, as shown below