An Enigma Is Solved? 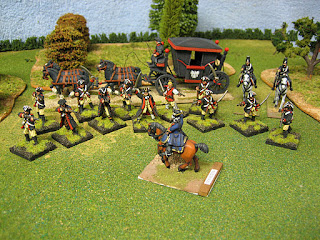 Colonel Enigma has a run in with the Regulators.
Colonel Enigma, the head of the Gallian Intelligence Service attached to the army in Western Germany, liked to work alone at times. He would don various disguises, from that of a mere peasant, to a Lutheran preacher, or even a Prussian officer. His efforts often paid good results, as his information was usually timely and very accurate. More than one Gallian victory had its roots in the information that Colonel Etienne Enigma delivered to the Gallian army.
Enigma led a charmed life as they like to say. He had many close calls passing through the lines. On one occasion he was disguised as an old hag and had nearly passed through the Germanian checkpoint when he literally ran into Colonel Bauer, his counterpart in the Germanian Secret Service. As both of them tumbled to the ground, Enigma's pistol fell out from under his garments and clattered on the cobblestones of the street. Bauer looked him straight in the eye (and I do mean "eye", because Enigma had lost sight in one eye and always wore an eye patch) and was about to give a shout when a thunder of musketry erupted from the woods. It was Gallian raid behind the lines and it seemed as if every Gallian light troop in the world was erupting forth from the woods.
Colonel Bauer now had more pressing concerns, his safety to be exact, and he dashed out of the street and into livery stable, where a squad of his grenadiers were seeking refuge. In all the excitement, the old hag slipped away, Bauer noting that she had dashed for the cover of the woods. But that is a story for another day.
This evening, General Chevert insisted that Colonel Enigma take Lieutenant Delacroix along with him. Enigma knew that he wouldn't be able to change Chevert's mind. When the general made a decision, he tended to stick to it. So off went Enigma and Delacroix towards Hesse Seewald, or to be exact, to the town of Vach at the eastern end of the Fulda Gap. Chevert needed to know if the Germanians were stirring from their encampments while the Gallian army was stealing a march through the undefended gap.
The trip started out uneventfully. It was a cloudy evening so there would be no moonlight to give them away. Furthermore, the road to Vach was decidedly empty of enemy patrols. Save for one: a squadron of Germanian hussars approached the two Gallians from a side road. They stopped to inspect the two travelers, but when they saw that it was a Prussian colonel and his aide, the hussar captain invited them to travel with them as they were all riding in the same general direction - east.
Enigma kept his cool and carried on a friendly banter with the Germanian hussar officer. Delacroix merely kept his mouth shut, as one might expect of an aide de camp of a Prussian officer. Eventually, the squadron arrived in Vach and the hussar officer bid farewell to Enigma and Delacroix. The hussars peeled off on a road bearing north, leaving Enigma and Delacroix alone once again.
Both men heaved a sigh of relief, especially Delacroix, who was soaked in perspiration. They continued on the road bearing east, passing several Germanian outposts, but still, nobody bothered to stop or challenge them. Well almost nobody.
A couple of miles beyond Vach (and they were now inside Hesse Seewald territory), the still of the night was interrupted by a crisp, clear voice shouting "Halt". Delacroix lost his nerve and kicked his horse with his spurs in an effort to get away. Enigma, who had clearly heard the sound and click of a score of musket firelocks being drawn back, did as he was told. Delacroix had gone no more than ten yard down the road when the night silence was interupted by the flash and thunder of musketry. Delacroix fell to the ground, his body riddled with lead. 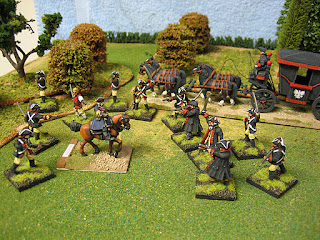 The Regulators surround and apprehend Colonel Enigma.
Enigma kept his cool, hoping to talk his way out this pickle, but Delacroix's foolish dash had ruined his chances of doing that. He looked around and could see that he was surrounded, but he could not quite make out the uniforms of these men. They looked military, and yet they did not. Several lanterns were lit and approached . Enigma could make out the Prussian cut of the uniforms, but they were decidedly black rather than blue.
"Your papers please, Herr Colonel", said the large brute who seemed in charge. He was an ugly looking cur, with a scar across his right cheek, and he was a big one too, standing well over six feet tall, by Enigma's estimation. The man looked rather more like a pirate than he did a soldier. He had heard tales of Black Riders raiding behind Gallian lines, spreading fear and destruction where ever they went. Until now, he had not believed these stories, but there they were right before his eyes.
The ugly pirate took a glance at Enigma's identity papers. The brute did not seem to be convinced of their authenticity.
"Get off the horse, Colonel." he barked.
Enigma did as he was told. As long as he stuck to his story, that he was the inhaber of Prussian Kurprinz Regiment, his captors would have to pass him up the chain of command to the point where someone could verify his identity and papers. If he tried to escape, they would kill him on the spot for sure.
"This way Colonel. Follow me," said the pirate. An escort of a dozen or so black uniformed men fell in on either side of Enigma as they marched him off the road. Just ahead of them, he could make out the form of a coach and four parked in the glade beyond. It looked like he would be safe for now, because clearly the captors were taking him over to the coach. No doubt to drive him to some headquarters for further evaluation.
As they entered the glade, he could make out more of the features of his captors as there were more men with more lanterns. There even appeared to be a troop of uhlans. Everyone, foot soldiers, hussars and uhlans were dressed in black...
and as he neared the coach, he could finally see that it too was black, with red trim and a white eagle emblem on the door.
"Mon Dieu", he whispered to himself.
It was that Black Coach.
Posted by Der Alte Fritz at 11:57 PM