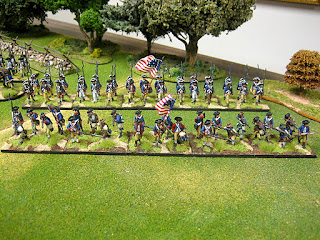 Fife & Drum Continental firing line using both Continental and Militia figures. As you can see, very few of the muskets extend beyond the edge of the base. This protects the figures from wear and tear breakage. Click or double click to enlarge the pix.

Here is a picture of the Continental firing line regiment that I completed over the weekend last. I used a mix of Continentals (13 figures) and American Militia (12 figures) to achieve a more diverse selection of poses and add more different types of coats and headgear. The goal was to depict a regiment that had recently recruited a lot of new men, who had not yet received their uniforms and other regimental equipment.

I was sorting figures to create a couple more American units: one militia and one Continental, to prime and paint over the upcoming holiday period. I like to place them on their stands so that I can figure out how best to mix up the poses on each stand. Once I have a layout to my liking, I take a sheet of paper and make a quick map of the regiment showing where each specific figure will be placed. Otherwise, I would forget where they belong. 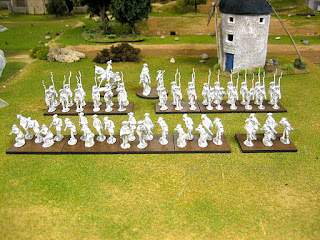 Next in the painting queue: militia firing line (front) and Continentals marching (rear)

In the picture above, note the Continental unit in the second line and how it is split into two groups (2 stands and 3 stands). I am experimenting with the idea of painting a large 36-figure "brigade" rather than a regiment. Each regiment would have two stands of six or twelve total figures. One regiment would be the small Delaware Regiment (12 figures) and two more 12 figure units of Maryland regiments. Combined, they would comprise the "Maryland Brigade". So the Delawares could be painted in a more formal blue coat/red facings/white small clothes; one of the Maryland regiments could have grey coats and green facings and a third regiment could have anything else. Maybe even red coats. 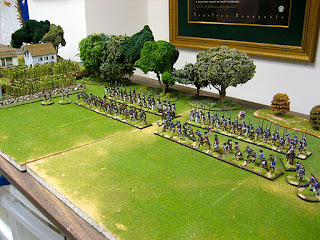 Four regiments of Continentals have been painted so far (plus two more militia battalions).

The picture above depicts either a brigade of four regiments or two brigades of two regiments. I will probably increase the brigades to three regiments temporarily, with the ultimate goal of four regiments. There is also the militia brigade that I am working on. I figure that I can finish a total of 9 battalions of Americans in time for a game at the next SYWA convention. The British will have a battalion of Guards and Lights plus some Hessian regiments (using my Minden Prussians as fill ins until I can paint more regiments of British line troops).