It's Quiet. Almost Too Quiet! 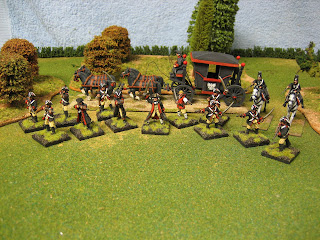 The Regulators and that mysterious Black Coach. Black Scorpion Pirates and Marines painted as Lady de Winter's personal body guard of naer-do-wells. The coach and four are from Redoubt Miniatures (ECW range) and a couple of Stadden Black Hussars are checking things out. Coach driver is a one-off special made for me by the very talented John Ray. Click to enlarge... if you dare.
Come on, you just know that these bad boys are going to be showing up fairly soon. They are starting to get a bit annoyed about that little trollope and murderess, Diana Pettygree, traipsing about western Germany on one extended lark with her coterie of ditzy little girl friends. They seem to be totally oblivious to the fact that there has been a major war going on for the past six years.
The Regulators intend to remind Miss Pettygree that life is not all seashells and balloons when there is a war going on. Stay tuned, something BIG is about to happen.
**********
Today's random picture from the past reminded me that I have to increase the size of the Black Legion of Milady de Winter. I bought a couple of packets of Black Scorpion 18th Century Marines a few years ago with the idea of adding another company or two or Regulators (12-15 bad guys to a company). I also have another squadron of Crusader Bosniaks that need to be painted to boost that unit up to two squadrons. We cannot have Milady's guard du corps being outnumbered by the opposition now, can we?
I also thought about finally painting the Martin Hille 30mm Prussians that I bought back in 2005 and adding them as a grenadier guard for Milady. They will have the usual black & red garb, but I might put them in reverse colors and give them red coats, black facings and straw breeches and waistcoats.
Milady will also desire to add some 6-pound horse artillery to her little Black Legion. Word has it that those Frenchies are "on to her" so a little more protection might stand Herself in good stead.
Milady is very unhappy about recent events and attempts to kidnap Miss Pettygree. Someone is tipping off the French about her every move. Someone is going to pay with his or her life, I suspect. The fate of the unfortunate servant, Miss Catherine, will be revealed shortly. As you might recall, she was captured last year during a raid that almost nabbed the pesky Pettygree. It is not a very happy outcome, that is all that I can say for now.
See you tomorrow.
Oh, and be sure to lock your doors and windows tonight - the Regulators are on the prowl.
Posted by Der Alte Fritz at 11:40 PM