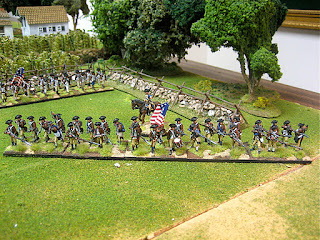 I completed my third regiment of Continental units for my AWI project, which will join the two militia units previous painted. This time I chose another brown-coated regiment from the state of Pennsylvania: the 1st Pennsylvania.

To differentiate it from the 3rd PA Regt., I chose action or firing line poses instead of the march attack pose used in the other regiments. The results can be seen above (please click the picture to enlarge).

I really like the way that this regiment turned out. I included four of the militia figures from the Fife & Drum range. Can you find them in the picture?

Next on the painting table is a similar Continental regiment in blue coat with red facings and buff breeches. I painted the drummer in reverse colors, so the coat will be red and the facings will be blue. I completed the drummer figure this evening, and wow, does he ever look good!

I would like to increase the American army to about 8 battalions by the end of December, afterwhich, the British line and grenadier figures should be ready and so I will switch to red coats in January and February. The goal is to have enough regiments painted in order to host a small AWI wargame at this year's SYW Assn. convention in South Bend.

I am really stoked about this range! I am gathering information on the artillery branch so that my equipment sculptor can work on some 6-pdrs and 3-pdrs for the British, and 3 and 6 pounders plus a galloper gun (4-pdr) and perhaps a "grasshopper" gun and a limber. So in conjunction with the equipment sculpting, I will have Richard work on the artillery crew and limber horses for the range the next time that I am in the queue. So I would expect that around June or July of 2012, I should have nearly all of the basics in the range that one would need for AWI wargaming.
t
Posted by Der Alte Fritz at 12:49 AM