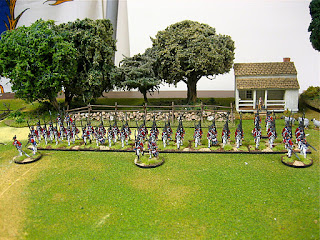 The completed first battalion of British Guards in the AWI, circa 1777.
The British Guards were completed and based on Friday and I put the finishing touches of static grass and Silfor Tufts on the bases before setting up the unit for its photo shoot. I think that they look pretty nifty and ought to scare the socks off of any Continentals that dare to face them in battle.
Next we have a front and back view of the first of the British Light infantry that I finished painting last evening (or early this morning, in actuality). I have decided to put six on each base, with the same frontage as the 8-figure Guards stand shown above. The lights are in a more informal mob of men and I plan to add bits of rocks, trees, fences and tall grass on each of the stands so as to make each stand a mini diorama. 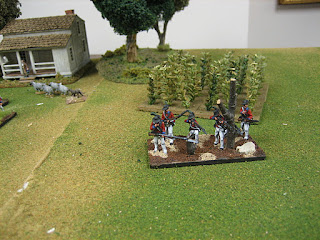 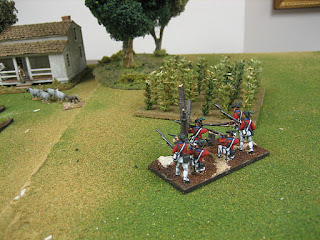 The rear view of the British light infantry

Finally, after all of this hard work, I decided to give myself a treat and try some of the famous Dresdner Stollen that my friend Stokes Schwartz has been raving about. Mind you, this Stollen was not made by the Grand Duchess herself, but rather it was purchased locally in a sort of "high end" imported food emporium. 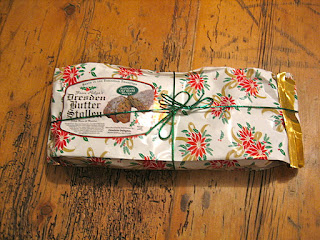 A store bought Dresdner Stollen.
I cut off the first piece and munched it down. It was OK, not great. I was a bit disappointed. Then it hit me that I should try warming it up with a little bit of butter spread over the top of the Stollen. That made all the world of difference! I have to admit that this Stollen was pretty good. Now tomorrow, when all of our guests arrive, I will warm up the Stollen AND sprinkle the white confectioners' sugar over the top and I am guessing that the sugar will make it even better. I give this Stollen a thumbs up, if warmed and covered with butter and sugar.
Merry Christmas Everybody! See you tomorrow.
Posted by Der Alte Fritz at 11:22 PM