Pennsylvania Battalions vs. Regts. of the Line? 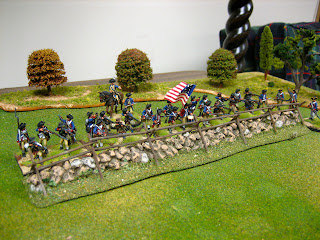 Fife & Drum Continentals painted as one of the Regiments of the Pennsylvania Line, circa 1777 (at least I think that they are). Click to enlarge the picture s'il vous plait. Fences by Herb Gundt.


I'm looking at my copy of Lefferts' "Uniforms of the War of the American Revolution" to identify regiments of Pennsylvania regiments to paint (using my Fife & Drum figures of course – see above) and I'm wondering what is the difference between:
1) Pennsylvania Battalions (numbered 1 through 6)
2) Pennsylvania State Regiment of Foot (only 1 of these)
3) Regiments of the Pennsylvania Line (numbered 1 through 13)
The Pennsylvania Battalions seem to have been formed in 1776 and were in Continental service. The State Regiment is obviously in State service. I'm inferring that there was some kind of reorganization of all units into new Pennsylvania Regiments of Line in Continental service. Am I on the right track?
So far, I've been using the Mollo book on American Revolution uniforms as my painting guide, but I'm not sure about the veracity of his information though. Lefferts almost gives you too much information (uniforms by the company within a regiment - highly variable). I guess that the point is that the uniforms were not, well, "uniform" within the same regiment.

Recipe for recreating the Continental Regiment shown above - mixing militia and Continentals in the same unit.