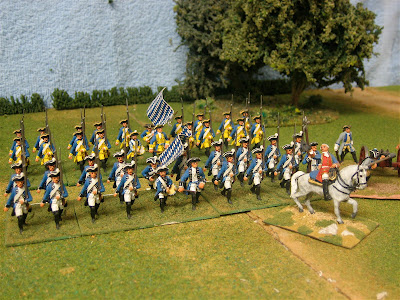 RSM Bavarian Brigade for the Seven Years War. Five infantry battalions, two 6-pound artillery and crew, and one mounted general. That's 110 figures in the whole brigade for sale at bargain price of $4.00 per figure or $440.00 for the whole brigade + shipping. Click pix to enlarge the view.

The sale of RSM Austrians is nearly over, I only have the six battalions of figures in advancing poses left for sale. If you have an interest in any of these Austrian battalions, you should know that I am dropping the price to $3.00 per figure for 30 figure battalions, or $90.00 per battalion. If they haven't been sold by the end of August, then I will rebase the figures for BAR and add three 60 figure battalions to my own Austrian army. 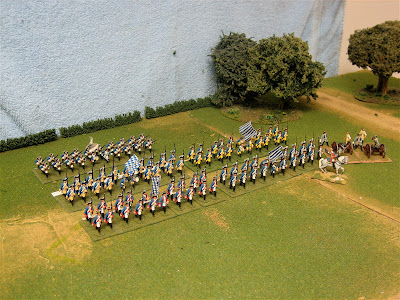 Overhead view of the entire Bavarian Brigade of RSM figures.

The Bavarians are next in the sale que, and this fine brigade was painted by Bill Biles using RSM Austrians as stand ins for the Bavarians. The brigade consists of five battalions: Lieb Regiment, Minucci, Clemens, Morowitzski, and Kurprinz. There are also two 6-pounders with three crew each and one mounted brigade general. Each battalion is mounted four figures per stand with five stands per regiment. The flags were hand painted and photocopied. The standard of painting is fairly good, although not done with the two or three tone painting style that seems popular today. 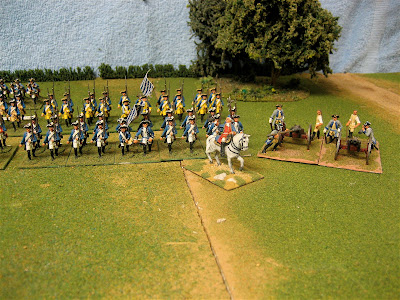 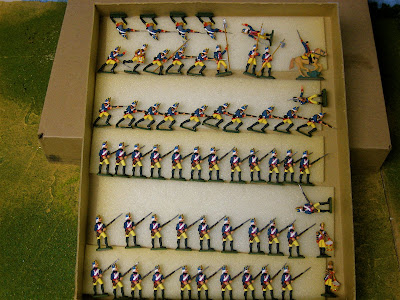 I purchased this fine looking regiment of Scruby Prussian Fusiliers painted as IR42 Wied, a few years ago and I have to say that the painter really did a nice job on the figures. There are 58 figures and one Spencer Smith plastic officer. If you are looking for a nice Old School battalion of well painted Scruby figures, then this would be an excellent addition to your collection. The figures are not mounted on bases, but rather have green bases for those of you who are interested in that Classic Wargame look as seen in Charge! These are priced to sell at about $4.00 per figure or $245.00 for the whole regiment. This would be perfect for BAR or Charge or you could base the figures into two 30 figure battalions to create a two battalion regiment in a 1:20 ratio.

I am offering a nice Prussian dragoon regiment, comprised of that little known range of Dixon figures, painted as DR3 von Meinicke. The pink or rose facings are very unusual and add some nice color to the tabletop. It is a 20 figure regiment based on 2" square stands and includes a hand painted flag. Bill Biles painted the regiment for me back in the 1990s. The figures are a little larger than the RSM figures, but I think that they look just fine along side RSM cavalry, in terms of overall size and proportions. These are priced for a quick sale at $6.00 per figure 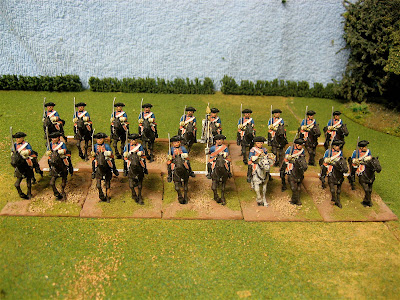 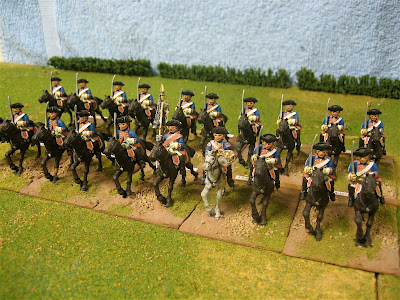 I have two regiments of Prussian cuirassiers using RSM figures for sale. The CR12 Kyau regiment was painted by Bill Biles for my collection and is priced at$7.00 per figure or $140.00 for the unit. The second regiment is CR10 Gensdarmes painted by Dean West at $8.00 per figure or $160.00 for the regiment. The Gensdarmes are on single stands and I could rebase them to suit your particular needs. 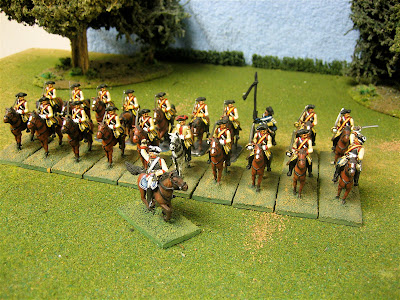 CR10 Gensdarmes Prussian cuirassier regiment, expertly painted by Dean West. This regiment is a beauty. I will add a GMB Designs flag to the unit. 21 figures for $160.00 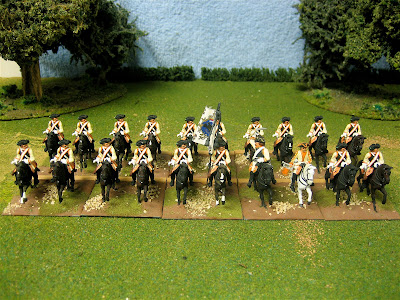 CR12 Kyau Prussian cuirassier regiment painted by Bill Biles. $7.00 per figure or $140.00 for the unit. Hand painted flag and nicely based with spackle compound, gravel and flock. ID tag with the name of the regiment is glued onto the rear of each stand.

If you are interested in purchasing any of the offerings that are posted on this blog entry, then please feel free to contact me at my e-mail address:

I will accept your personal check as payment and send the figures upon receipt of your payment.

I will be offering more RSM Prussian units in August 2010 as well as some very nice Perry ECW cuirassiers and Montrose' Scots infantry.
Posted by Der Alte Fritz at 12:29 AM