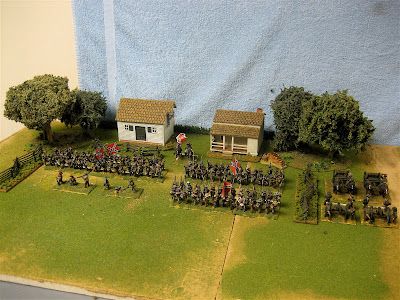 Aerial view of Colonel John Brockenbrough's brigade plus Moore's Virginia battery. click all pictures to enlarge the view, or double click for extreme close ups. Buildings and trees were made by Herb Gundt of H.G. Walls.

I am placing my 2,000 piece 28mm ACW pair of armies on the selling block and thought that I would lead off featuring one of the smaller Confederate brigades, that of John Brockenbrough in Heth's Division of AP Hill's Corps, circa the Gettysburg Campaign of 1863. The armies represent the Union I Corps of John Reynolds and Heth's Division at a 1:10 ratio of figures to men. That means that a 400 man regiment would be represented by 40 figures, 300 men by 30 figures, and so on and so forth.

There is a nice mix of figure brands within this brigade of 100 infantry, 6 skirmishers and a 2-gun artillery battery with limber teams. On the infantry side of things, 42 are the original Dave Alsop sculpted Old Glory figures, 30 Connoisseur figures, 14 Eagle-Bicorn, 12 First Corps, 6 Dixon, and even 2 of the now defunct Front Rank 28mm ACW range. The variety of figures presents an attractive and dynamic brigade that looks the business, as the figures all mix in very well and have a realistic look to them.

With the 150th Anniversary of the ACW coming up next year in 2011, I predict that there will be a surge in ACW wargaming. This is an excellent opportunity to get your army started before the Susquicentennial begins. I have more Confederate brigades available as well as numerous Yankees, included the famed Iron Brigade (these are gorgeous units).

Brockenbrough's Brigade (106 infantry, 18 artillery components in 2 gun sections, 1 command stand with two mounted conversion figures: $5 per figure or $620.00 for the entire brigade - must be purchased as a brigade. 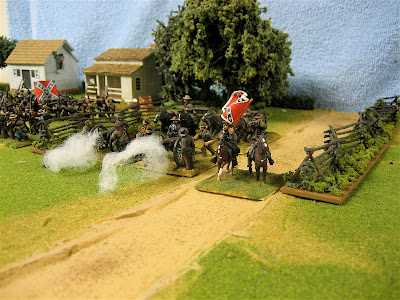 Close up shot of Moore's VA Battery in action, with Colonel Brockenbrough looking on. The Colonel (with binoculars) is a conversion of the Connoisseur Confederate artillery officer upper torso and a Connoisseur mounted officer pair of legs, nicely converted by Dennis Smail. 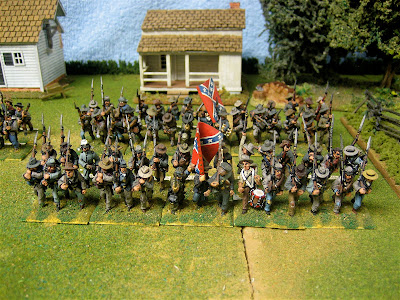 The picture above depicts two of the larger 30 figure regiments in the brigade and the front unit consists largely of the Dave Alsop Old Glory figures (25 of the 30 are Old Glory). In my opinion, Mr. Alsop made the best ACW figures that I have ever seen (although the later Redoubt figures are mighty close to being as good) and it is a shame that he passed away so early in life. The figures are no longer available and have long since been replaced by lesser sculpts, although the 2nd Generation Old Glory ACW figures look promising. This is a great opportunity to acquire these hard-to-find Alsop figures. 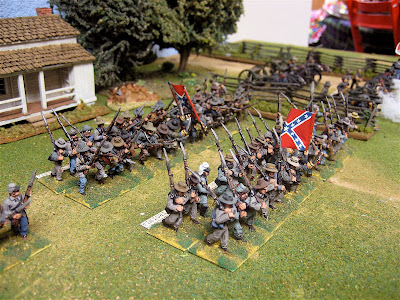 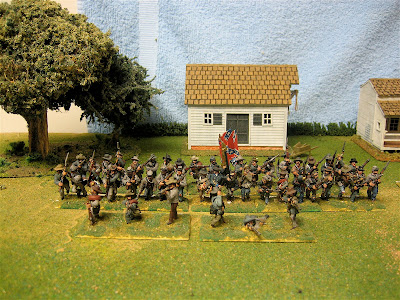 Each brigade comes with a pair of skirmish stands holding 6 extra figures, as used in our Rusty's Rules for ACW games.


For skirmishers, we gave each brigade six skirmish figures mounted on two stands. They move at the normal movement rate in our rules, but when they fire, one simply rolls a pair of D10 percentage dice for the outcome. At long range, you needed a score of 10% or less to score a hit, while at close range, a score of 20% would do the damage. We quickly discovered that skirmishers were highly effective against artillery crews and we all learned to dread the approach of skirmishers towards our guns as we soon ended up with the crew and horses getting picked off. It was a fun rule that really added a lot to our ACW games.