Prussian Artillery Battery in the SYW 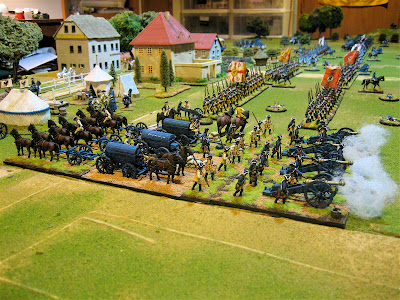 Four gun Prussian battery with all of its support pieces deployed to the rear. Guns and limbers are from Berliner Zinnfiguren, the crew and labourers are Minden Miniatures, the supply wagons are from Front Rank Miniatures, and the horses are from RSM.


I knocked out two supply wagons, another limber team, and a stand of labourers over the weekend in order to expand my SYW Prussian artillery battery, which is a part of my Minden Project. The results can be seen in the pictures (above and below) and I am really pleased with the way that things are shaping up. Eventually, the battery will have four 12-pounders and each gun stand will have four crew men, backed up by a stand of two labourers, one supply wagon stand and finally, the limber team. This will create the depth of the battery which should be more realistic, what with its complicated and busy logistical tail attached. 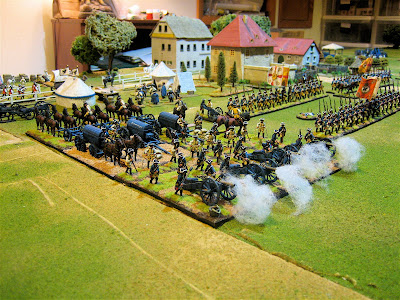 Front view of the Prussian battery in action, with a little bit of kapok or cotton to simulate the smoke after the guns fire. Buildings by Herb Gundt of H.G.Walls.


I only need to paint and assemble one more limber team, a supply wagon, and a stand of labourers in order to complete the fourth section in the battery. Given that I am using a 1:20 ratio (or about 2:1 ratio of gun models), the four gun sections equate to about 8 actual guns. 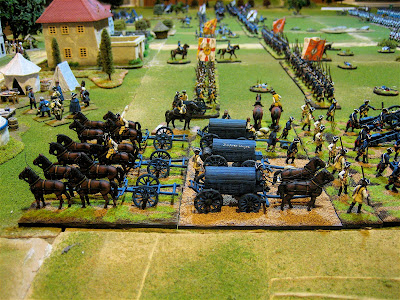 A closer view of the limber teams and the supply wagons that support each gun. In the background you can see Frederick the Great talking to his generals, near the tent.

I also assembled and primed some ammo supply wagons for the infantry this evening. Each brigade will have one small arms supply wagon to accompany it into battle. The 2-wheel carts are from Front Rank.
Posted by Der Alte Fritz at 2:08 AM