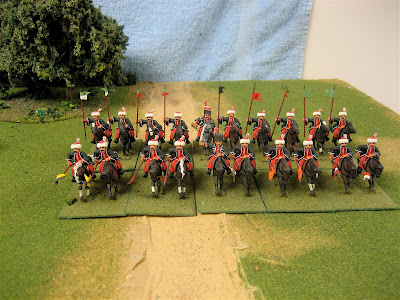 UPDATE: The Zieten Hussars are still available, but the Bayreuth Dragoons and Bosniaks have new Inhabers.

It is time to move some of my Prussian cavalry on to some new inhabers, and today I have two nice selections of RSM figures -- the Bayreuth Dragoons (DR5) and the Zieten Hussars (HR2). I also have a nice regiment of colorful Bosniak lancers from Front Rank Figurines. All of the figures were painted for my by Bill Biles, the author of the uniform guides to the Seven Years War. 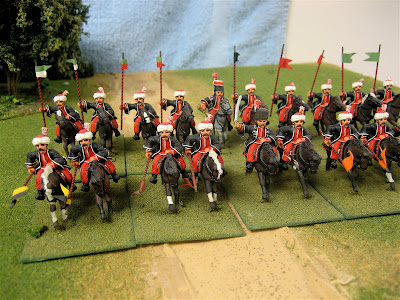 Close up view of the Bosniaks, showing some of the detail such as the striped lances, different pennant colors for each squadron and some of the shabraque detail.

The Bosniaks are a colorful regiment of Front Rank figures, nicely painted by Bill Biles. Bill notes that it was a royal pain in the neck to paint the striped lances. Each stand of two figures represented one squadron in my 1:30 ratio so all ten stands represent an individual squadron, noting that each squadron had a different colored lance pennant. The frontage of each stand is 2-inches, but the stands are deeper to accomodate the extra length of the lances. They pair up nicely with the front rank of ten figures having couched lances and the back row having upright lances. I think that I have four extra unpainted castings that I will throw into the deal at no extra charge. 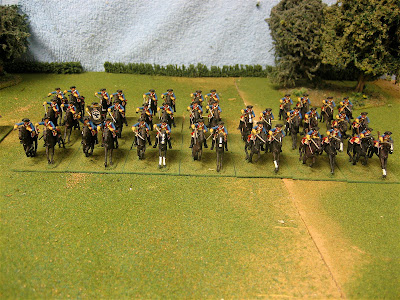 Bayreuth Dragoons -all ten squadrons of them.

OK, I will admit it, I hate to lose battles and so when I first read about the exploits of the huge 10 squadron regiment of Bayreuth Dragoons at Hohenfriedberg, I knew that I just had to have them in my RSM Prussian army. In our 1:30 ratio for Rusty's Rules, ten squadrons worked out to about 40 figures. So that is what I commissioned Bill Biles to paint for me. Wouldn't you know it, but in their very first game, we drew lots to determine the sides and I ended up playing the Austrian infantry. Oh yes, it gets even worse. I had to be the lucky general who faced them for the first time. They were commanded by Dennis Smail, the former owner of RSM when it was based in Lexington, Kentucky. I think that I still have the hoof prints on my back when Dennis rode over my Austrians in that battle. Life is not fair sometimes. 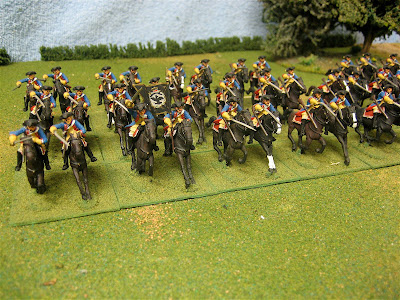 Close up view of the Bayreuth Dragoons. Note the mix of horses on each stand: one has legs bunched and the other has legs stretched to give the impression of rapid movement.

Bill was very clever in his construction of this regiment. He actually used RSM French cavalry charging "at the point" - which is really a very animated and exciting pose for cavalry. He simply did a "conversion with paint" on the figures, painting them as Prussians in light blue coats, rather than as French in white coats. He also mixed up the horse poses, using the RSM galloping horses - legs bunched and legs stretched. I have to say that I really like the way the whole unit looks with the dynamic mix of horse poses on each stand. 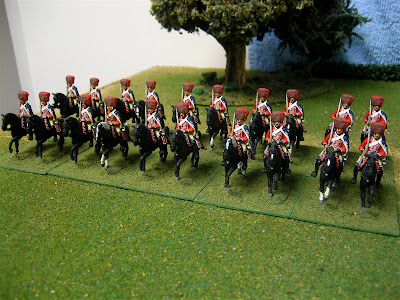 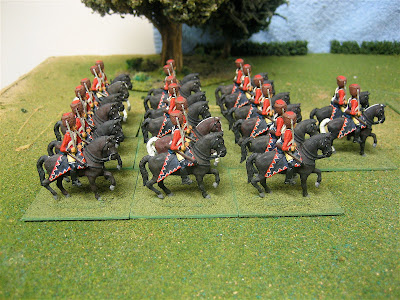 Close up view showing the detail of the van Dyking on the shabraque.

No erstwhile Prussian commander should ever get into a table top battle without one of the most famous light cavalry regiments in the Fredrician army: the hussar regiment commanded by von Zieten himself. This 20-figure regiment was also painted by Bill Biles many years ago and has served Der Alte Fritz admirably over the years.

How to Buy These Figures:

Just send me an e-mail at:

and we can make the arrangements. This is a wonderful opportunity to acquire 80 nicely painted cavalry figures at a moderate price of $500 for the lot. Of course, one can also purchase individual regiments if that is your preference. These RSM figures have been moving fast, so don't delay as these are the last of the Prussian cavalry that I will be selling for quite some time.
Posted by Der Alte Fritz at 12:19 AM