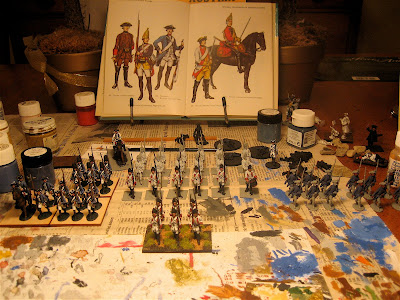 A view of my painting table taken this evening. RSM Bavarians are seen on the left, sitting atop some Litko wood bases. Some Minden SYW Austrian grenadiers sit in the middle of the table, and more RSM Bavarians are holding down the right flank. The Mollo book on SYW uniforms provides some guidance for my brushes.


It was a very busy weekend at Schloss Seewald, what with the Princess having a sleep-over on friday night, a wargame at Chez Protz in Brown Deer and a lot of painting dodged in between everything else. I thought that everyone would enjoy taking a look at what is on my painting table lately. As you can see in the picture above, it has a definite Bavarian and Austrian trend of late. Please click on the pictures, if you dare, to see things blown up (in size, not literally). 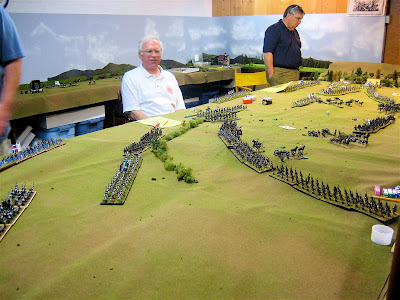 A view of the battlefield for our game on Saturday. This is a picture of my Prussian brigade charged with holding an exposed salient, with the promise of reinforcements to come. Haven't we played this scenario already? Reminds me of our last Colonial game, a bit.


I have completed one stand of Minden SYW Austrian grenadiers, but have not been able to attend to the rest of the battalion for several weeks, due to the need to prepare and pack all of the units that are going to new homes. Saturday night, after arriving home from the BAR game in Brown Deer, I hauled out a 30 figure battalion of RSM Austrians that I am painting as Bavarians on commission. I was able to knock out 15 infantry and one mounted officer Saturday and on through this evening, before retiring to the blog to post these pictures. 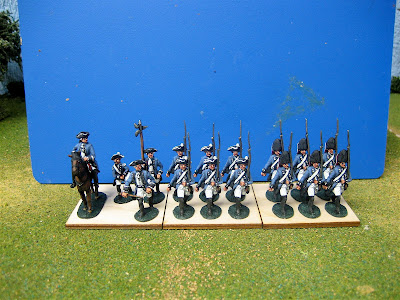 One of my current commissions calls for two 30 figure battalions of Bavarians, using my vast stock of unpainted RSM castings that are holding down my house. These figures were fun to paint, and I rather surprised myself at how fast my brushes were flying over the weekend. I had hoped to complete six grenadiers, but I blasted through that goal with relative ease. The unit will be comprised of 23 foot and one mounted officer, plus a stand of 6 grendiers. Presumably, the grenadiers could be detached from the parent unit and converged with the grenadiers from other Bavarian regiments.

The most difficult part of the job was experimenting with various shades of light blue, until I could find one that was on target. Using the Funken book and the Cigaretten Cards book as a guide (both seemed to agree on the color of blue used by the Bavarians), I settled on a Reaper Paints color called "Slate" as the undercoat and also used an old bottle of Ral Partha Dragon Wing Blue as the highlight color. I should have this battalion done by the end of the week. After that, I will have another Bavarian unit with red facings to paint to complete the commission.