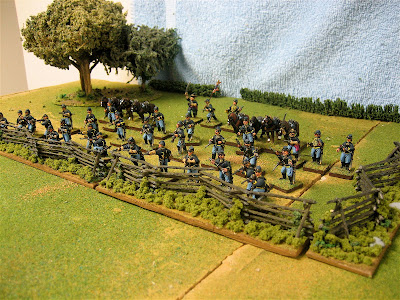 Contact me by e-mail at: altefritz1740@yahoo.com for more information. 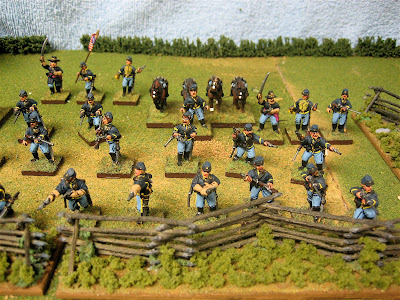 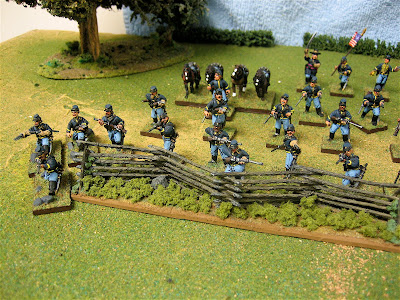 The Redoubt figures are mounted on single bases, 3/4 - inch wooden squares except for several figures firing from the kneeling position, which required larger bases. There are also two pair of horse holder stands (1 horse holder with 4 horses). The figures are painted to an exceptionally high quality and they have a lot of character and animation to them. It seems as if no two figures are identical. You could leave the figures "as is" on single stands, or rebase them to your favorite rules system. If you game the ACW, you certainly need cavalry to screen your lines, or to race ahead to secure a vital terrain feature and fight dismounted, while awaiting the arrival of the Union infantry. 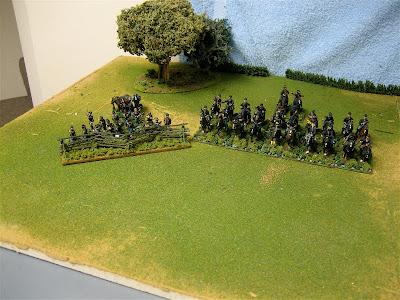 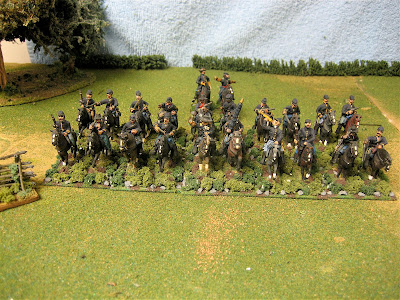 Close up view of the mounted regiment. The figures are from a variety of manufacturers including Connoisseur, Dixon and Hinchcliffe. There are many conversions with extra weapons or packs or bandanas added to the original figure. 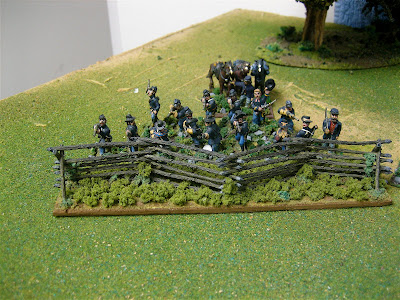 The dismounted version of the Union cavalry regiment, with an extra horseholder stand in the rear.
The Union cavalry depicted in the second lot are painted to a decent standard and have seen a fair amount of table top action over the years. The figures come from a wide variety of companies including Connoisseur, Dixon, Eagle and possibly a few others. Many of the figures have been converted via head swaps, new arms, additional carbines or pistols attached to the figure, neckerchiefs/bandanas, and other modest changes. The regiment does not depict any particular Union regiment, so you could add your own GMB Designs flag to finish off the regiment in a nice manner. The mounted figures are priced at $6.00 per figure and the dismounts are priced at $4.00 per figure. 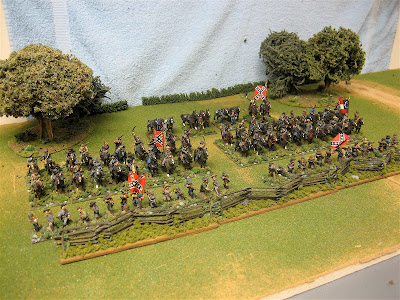 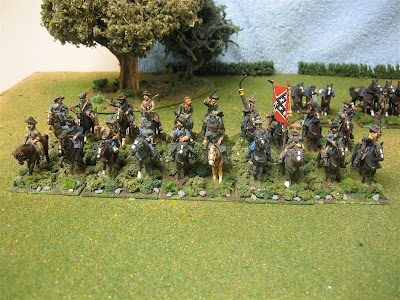 The first CSA cavalry regiment in the lot. 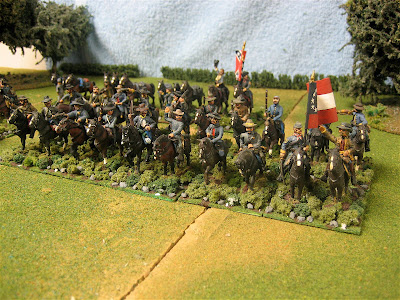 A close up view of the second CSA cavalry regiment in the lot. 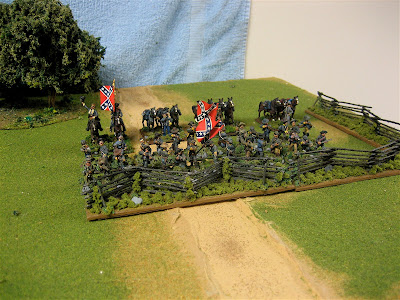 Two dismounted CSA regiments, with horseholders to the rear, and mounted brigade commander with flag.

As with the Union cavalry regiment, the two regiments shown in the pictures above include a nice variety of figures from different manufacturers. The mix of figures gives each regiment a certain degree of individuality and lends itself to a nice campaign appearance to the brigade. Each regiment of 20 mounted figures also has one horse holder stand and 15 dismounted figures. The mounted figures are based two per stand (2" squares) and the dismounts are based 3 figures per stand. It would be relatively easy to rebase the figures to match your existing collection or rules set, or leave them as is.

I don't know how you feel about ACW cavalry, but they were always the last thing that I wanted to paint when I was building my armies. This sale presents a wonderful opportunity to pick up some nicely painted, ready to game figures at a very reasonable price.
How To Purchase This Collection
If you are intersted in purchasing one, two or all three lots in this sale, then contact me at my yahoo e-mail address and we can work out the details. I accept cashiers checks from new clients, or your personal check (drawn on a USA bank) if we have done transactions in the past.
altefritz1740@yahoo.com