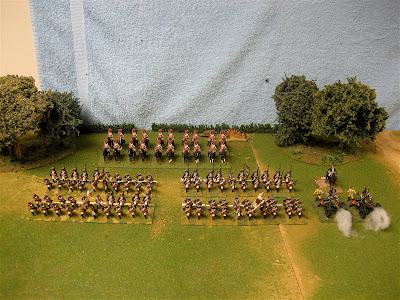 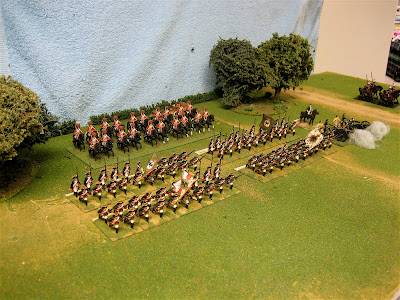 Aeriel view from a hot air balloon of the whole brigade plus the Zieten Hussars. Please double click the pictures to enlarge the view. Infantry and artillery were painted by William Stallings of Lexington, KY (an old gaming friend of mine), while the hussars were painted by Bill Biles (another of the old RSM Crew that I gamed with for many years.

I have another brigade of RSM Prussian infantry that is seeking a new Inhaber to lead them on to victory. The brigade consists of two regiments: IR9 Puttkamer (shown on the left in the pictures) and IR20 Bornstadt (shown on the right). The infantry was painted by William Stallings and he hand painted the flags and then reduced them on a color copy machine. This is what we did before the days of GMB Designs flags.

I also have a battery of two 12 pound guns and one mounted commander. Finally, we need a little bit of Hussar Love around here so that we can find a new home for the HR2 Zieten Hussars. To hasten their departure and make room for some new troops, I have dropped the price of the hussars from $6.00 each to $5.00 each.

Here are some closer views of the figures in the brigade: 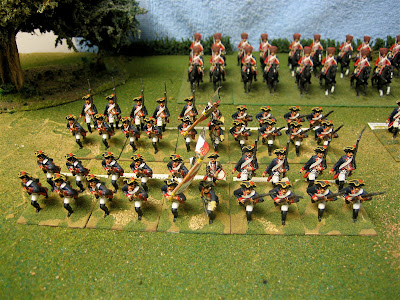 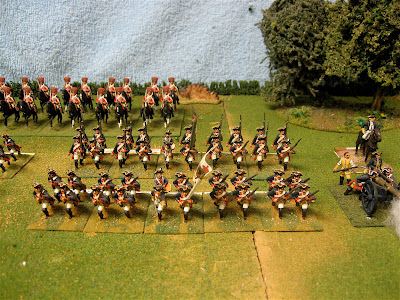 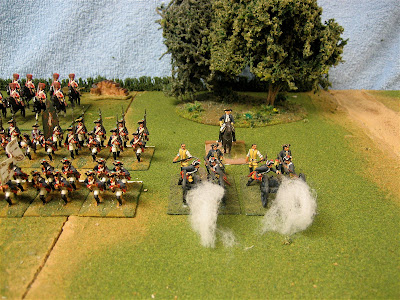 Please click on the picture to enlarge the view of the RSM Prussian artillery battery.

Bargain Bin:
I still have the Scruby Prussian fusilier regiment of 60 figures for sale and I am dropping the price to $3.00 per figure, or $180 for the lot. If you also buy one of the other units listed today, I will drop the regiment's price down to $150. This is really a nicely painted unit and would be perfect for large big battalion games, or you could divide the figures into two 30-figure battalions.

Something that I just whipped out last night - Bosniaks! 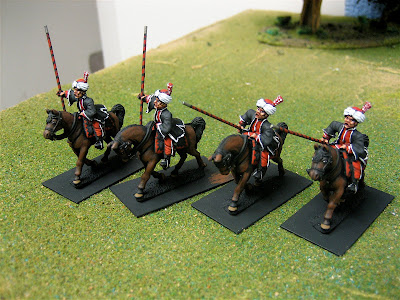 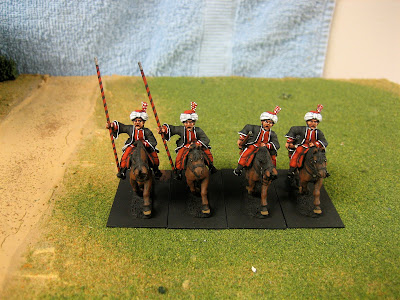 Front Rank 28mm Bosniaks - painted largely in one evening, except for the highlights on the horses and their tack. They still need pennants added to the lances and terraining on the bases.

I sold my Front Rank Bosniak light cavalry last week, and the buyer wanted to increase the 20 figure unit up to 24 figures, so that he could have two 12-horse squadrons for use in our BAR games. So I painted the last four figures the other night and finished off the horses this evening while listening to the White Sox baseball game on the radio.

These figures were a blast to paint, and since they are largely black, not too difficult to paint. The toughest part was painting the black stripes on the red lances. I haven't terrained the bases because the buyer plans to rebase the older Bosniaks in his own style and add the four new figures that I painted.

I did a modest amount of shading and highlighting on the figures because I was trying to blend my newer style of painting with some figures that were painted in monotone color back in the 1990s. But if you click on the pictures for a closer view, you can get a sense of how my brush work looks. I am working on a couple of commissions for people right now and will have an open schedule starting in October 2010. If you are interested in having some SYW figures painted, then send me an e mail at: altefritz1740@yahoo.com for more information.
Posted by Der Alte Fritz at 1:06 AM