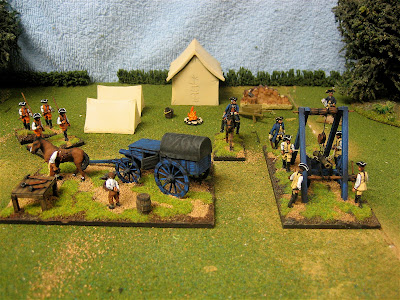 
I finally got around to painting my field forge, that I bought from the Berliner Zinnfiguren store in Berlin several years ago. As I have been building up my Prussian artillery park with various supply wagons and repair crews, I was eager to get this vignette painted and based to finish things off.

The blacksmith and his boy helper are from the Hovels range of 18th century civilians. The anvil and tools are included in the field forge set. I made the tool table from bass wood and card stock and also added a barrel from Front Rank. 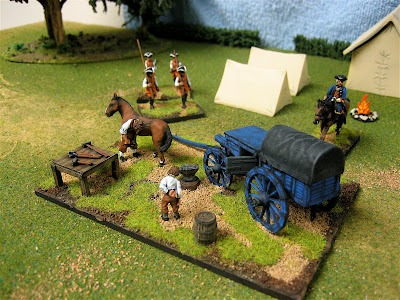 
These models won't play any role in any of my table top wargames, unless I have a skirmish game or a raid scenario where perhaps a task force of Austrian hussars and Croats are on a raid behind the Prussian lines with the objective to destroy a Prussian camp or supply center. Nevertheless, the field forge vignette is attractive and will enhance the overall look of my wargames.

Sale Update
The Zieten Hussars are still available to a good home and I will be posting two more regiments of RSM Prussian infantry later in the week (IR9 Puttkamer and IR20 Bornstedt). Each infantry regiment has two 20-figure battalions.
Posted by Der Alte Fritz at 4:01 PM