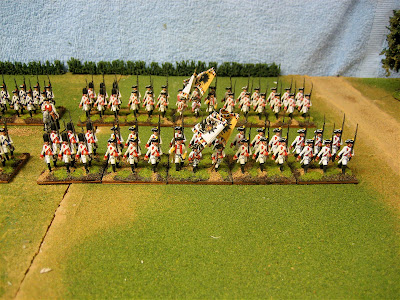 
The great RSM Summer Sale has been fairly successful so far, with 8 battalions preparing for transfer to new ownership. One of the buyers had me rebase his new battalions on 2-inch square bases for "Might & Reason" rules, but these bases could just as easily be used for Black Powder, BAR, Age of Reason or even Rusty's Rules. I thought that I would show you the before and after views of the battalions, i.e. with the old form of basing versus my new method of basing figures. The following two pictures depict the Austrian regiment Neipperg in its "before" and "after" method of basing. The figures are RSM figures painted by Bill Biles, circa 1994. 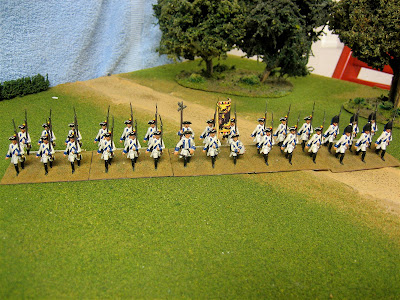 The Austrian Regiment Neipperg in the "before" basing method... 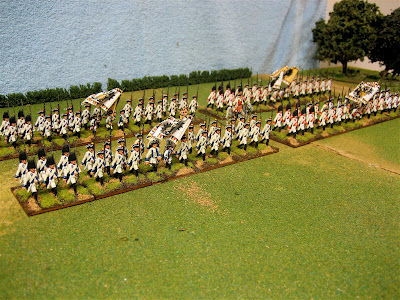 Austrian Regiment Neipperg (front left) in the "after" method of basing.

Please click on the pictures to see an enlarged view of the figures.


The old system called for gluing the figures onto plastic bases and then covering the bases with some spackling compound, then dipped in flock. It was cutting edge in 1994, but looks rather tired and out of date by today's standards. The painting is average because we largely did not shade and highlight our figures back then. Indeed, my own painting style has improved and changed over the years.

I had to rebase all of the battalions, so I stuck them in the freezer for about an hour, in order to loosen the bond of the superglue that I had originally used to glue the figures to their bases. In most cases, the figures popped right off the plastic base, but it was a bit of a chore to cut and hack up the old bases. Once the figures were loose, I then took an exacto knife and scraped off all of the remaining spackle compound that was still on the figure's base, so that they would be nice and clean for their new bases. Finally, I had some nice Litko bases, sized at 2-inch square, on hand and I used these for my customer's new basing. I highly recommend the Litko bases. They are inexpensive, but they look very nice and have clean cuts so that every base matches up snug and true to the next one. 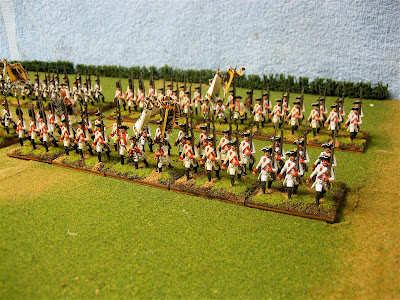 The righthand stand of figures was painted the other day in order to fill out the regiment with "march attack" poses. I tried to copy the style of the other figures, that I painted back in the 1990s. See if you can tell the difference.

The client asked for six battalions all in the march attack pose, which I was able to do, save for one unit (Kolowrat) that was short about 9 march attack figures. So luckily, I had some RSM Austrians already primed and ready to paint, so I was able to paint up the extra figures very quickly. RSM figures paint up fast and easy, which is one of the reasons I like them. Then I decided that having only one flag per battalion did not look right. So I decided to reflag the units with brand new GMB Designs flags that I had on hand. This meant that I also had to paint up six new flag bearers so that each battalion would have two, instead of one. In most cases, I clipped off the old flag and replaced with a new GMB flag, while the new flag bearers were painted from scratch.

I think that you will agree that the end result justifies the extra effort. The new basing really brings the figures to life and the two new flags adds a spiffy touch to the unit. This is an example of the type of service that you get when you buy figures from Der Alte Fritz.

Going forward, I have decided to sell the rest of the Austrian infantry and cavalry as single battalions or single cavalry regiments, in order to clear out the remaining units. They are priced to sell at a very reasonable $4.00 per infantry figure and $5.00 per cavalry figure, unless otherwise noted.

I will update the basing on any figures purchased and reflag the units with GMB Design flags, if that suits your fancy.

New Bespoke RSM Austrian Units
I also have 7 bags of 36 figures of Austrian musketeers in "march attack" pose that I am willing to paint, flag and base for anyone interested in brand new units. These will be painted with two-tone shading/highlight colors and be flagged and based to your specifications. Since these will be painted to order, the price per figure for the new RSM battalions will be higher than the old wargame units that are on sale right now. The new figures will be attractively priced at $6.00 per figure (so you get the figure and a nifty Alte Fritz paint job for $6.00).

and we can make arrangements to deliver your order in a timely manner.
Posted by Der Alte Fritz at 9:03 PM