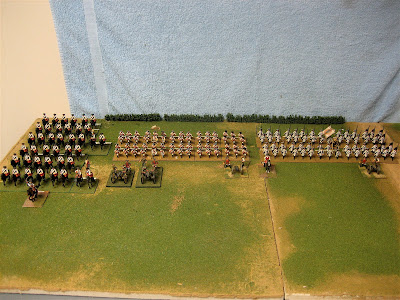 I have decided to sell off all of my RSM SYW Austrian and Prussian armies. This is a rather emotional thing for me, since some of these figures were among my first ever wargame units and I have fought a lot of enjoyable battles with them over the years. I need to reinvest the proceeds into other projects, mainly some needed home repairs. Eventually, I will replace these with my Minden armies, but after giving it some long thought, I decided that I do not need to have three different SYW armies.

I have grouped the Austrians into three lots of figures. All three lots have a nice variety of infanty, cavalry and some artillery plus mounted generals. So you can start with a nice brigade of Austrians from any of these lots. I have also grouped the figures by facing colors for those of you who might be interested in combining the battalions into "Big Battalions" for BAR or Charge rules. As is, they are 30 figure infantry units and 20 figure cavalry units that would be suitable for a number of rules such as Black Powder, Age of Reason, and Rustys Rules, to name a few.

The Austrians are priced reasonably at about $4.00 per infantry and artillery figure and $5.00 per cavalry figure. The painting style is "average" with no shading or 2 or 3 tone painting. In some cases, the cross belts have been lined. All figures have eyes that are done very nicely and avoid the bug-eyed look. My painting style and abilities have changed considerably since I first painted these figures, so I am not pricing them at my current market rates for painted figures. However, they look nice and will give you a nice brigade or two that is ready for battle.
Lot #1: $750 plus shipping 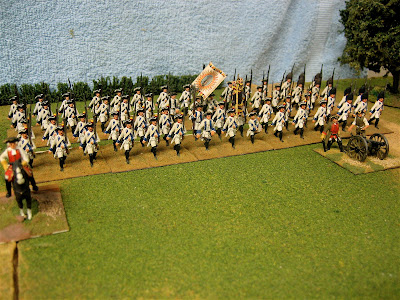 Lot #1 Austrian infantry with blue facings in march attack pose. You could combine these two battalions into one BAR-sized 60-figure unit. 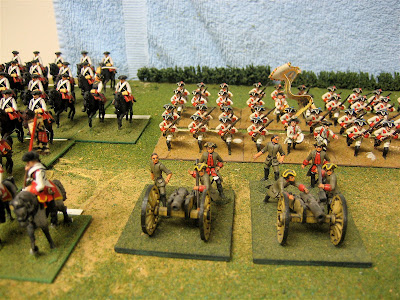 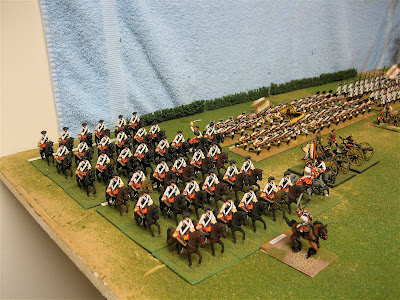 Lot #1 cavalry: two regiments of cuirassiers. They look so similar that they could be combined into one large 40 figure regiment. 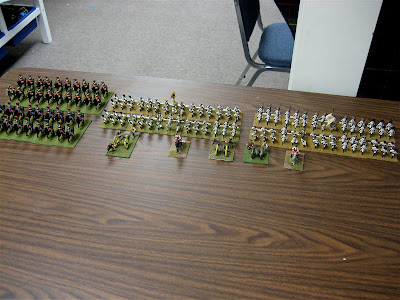 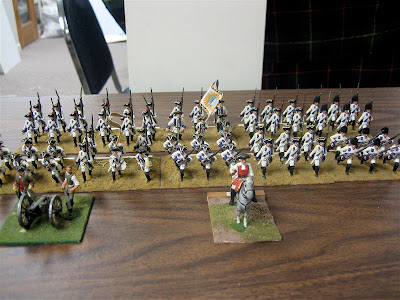 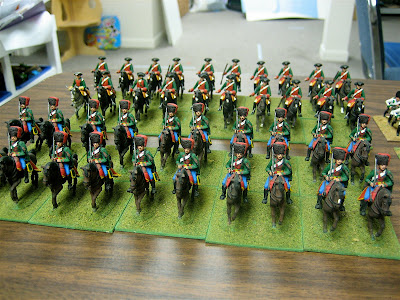 The second lot of Austrian figures contains two battalions of 30 figures in green facings and all in the advancing pose. Thus they could be converged into one 60 figure battalion for BAR or Charge rules. These are the Los Rios and the Luzan regiments.

There are also two battalions in violet facings: Gaisruck and Sachsen Gotha, so again, they could be converged into one battalion.

The Lot#2 cavalry include the first two cavalry regiments that I ever painted: the Baranyai Hussars and the de Ligne Dragoons.
Lot #3: $850 plus shipping 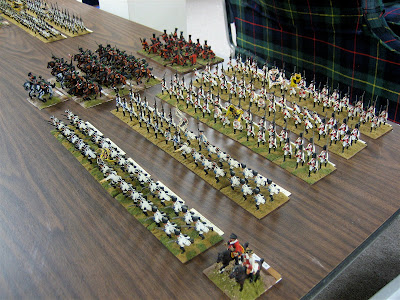 Lot #3: five battalions of musketeers, one btn of Croats, 20 Old Glory dragoons and an officer stand with two figures.

The lot also includes one Old Glory Austrian dragoon regiment (de Ligne) and one Old Glory Croat battalion of 24 figures. The Croats were painted by Leonard Albright of Lexington, KY and I painted the dragoons in my "middle period" so they have some shading and blacklining to them and are painted to a higher standard than my other figures in these three lots. 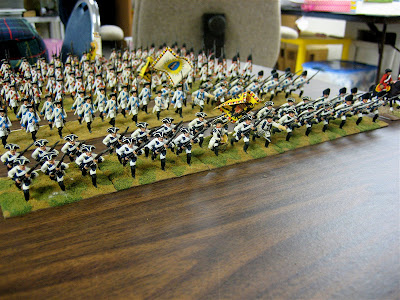 Close up of the blue facing infantry battalions. 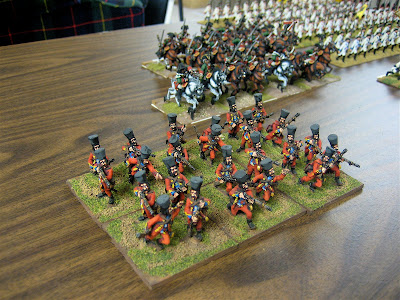 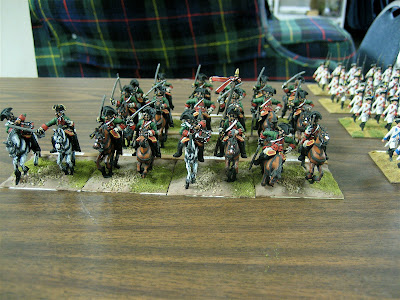 How to buy these figures
If you are interested in any of these lots of figures, then send me an e-mail with your interest to my box at:

I will be happy to work with you in terms of getting the figures shipped in a timely manner, or if you would like to have the figures rebased in a more modern style, we could work something out for the extra time spent on the rebasing. They could be rebased with static grass and gravel with multiple figures on each base, or as single based figures.
Posted by Der Alte Fritz at 3:24 PM