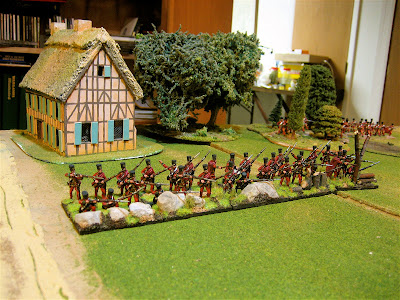 I finished basing my unit of Minden SYW Croats this evening and set up a few photo shots to post on the blog this evening. I hope that everyone likes them (well, everyone except der Alter Fritz himself, no doubt). 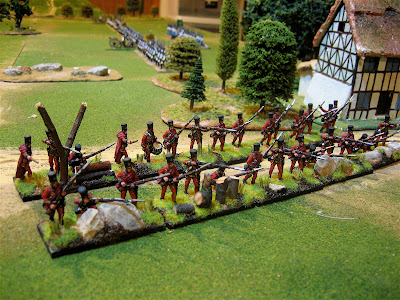 Closer view of the Croats. Take a good look at that "standing firing" pose and standing loading pose. I think that these are two of the best figures ever sculpted. Kudos to Richard Ansell, a most talented sculptor who has designed this range of figures.


I really like the animation and sense of action that sculptor Richard Ansell put into these Croats. These may well be the best figures in the whole Minden range. Croats have a little more detail on them in terms of hussar style lace, put they are a dream to paint and I really whistled through them over the course of several days.

They seem to demand some creative basing, so I obliged by placing rocks and scrub brush tall grass and few logs here and there. Then I positioned the figures so that they appear to be hiding or taking cover behind the little terrain items that I placed on each base. 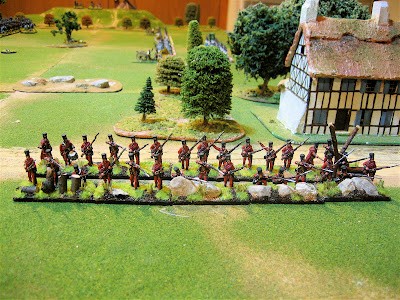 Another view of the Croats out in the open. I'm sure that they can't wait to find some cover, because you never know when some Prussian cavalry might come bursting on the scene.

I give these figures my highest recommendation because they have it all: realistic and elegant poses, correct anatomical proportions, accurate equipment, a sense of "action" to them, and finally, they are just simply fun to paint and look fantastic when they are completed.

On the Austrian front, I grey primed a regiment of fusiliers in tricorn and hope to get a good start on painting them over the upcoming holiday weekend (July 4th) in the United States. My Austrian regiments will have two battalions of 30 figures, the same as my Prussians, and will also have six figures on five stands measuring 60mm wide by 40mm deep. I will eventually have one each of red facing, dark blue facing, green facing, pink facing and one Hungarian regiment. So that's five regiments or 10 battalions plus one or two Croat battalions and one or two converged grenadier battalions. I will paint the grenadiers as if they were part of the other five line regiments and simply converge them into a couple of battalions.
Posted by Der Alte Fritz at 11:40 PM