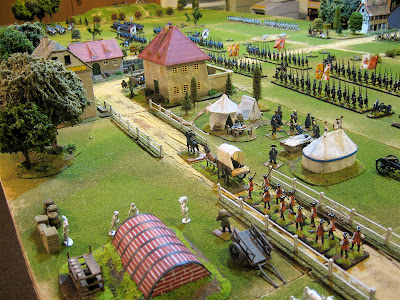 A view of the Prussian encampment from the eastern edge of the town. Note the larger trees next to the Gasthaus and in the far background. Also note how the several Austrian battalions in the far right background only look like light, very un-Prussian like blocks of color. I would imagine that this is how approaching troops must have appeared to the generals in the field.


I have been playing around with the layout of the Prussian encampment at Altenzaum, somewhere in Silesia, by gradually adding some more scenic elements such as larger trees and some unpainted camp personnel to sort of see how things will look once everything is painted. I have posted several pictures of the "upgraded" camp for you to view. Eventually, I will have a large population of civilians and support troops roaming around the town and the encampment, giving things a look of hustle and bustle as they do their jobs to support the army.

Please click the pictures once for a larger view and twice for a really close up look at what is going on. 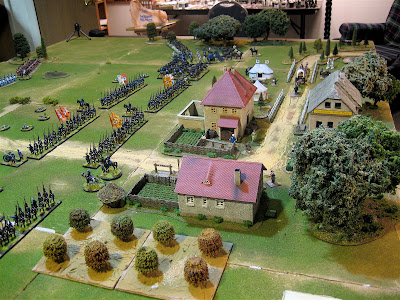 A view of the town from the western side. Again, note how the larger trees look more realistic. These were made for me by Herb Gundt using rubberized horsehair and pieces of driftwood. 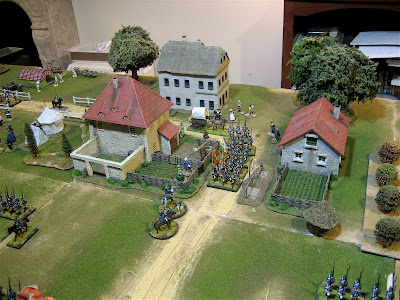 IR5 Alt Braunschweig marches through the town under the watchful eye of the King and Major General von Winterfeld. 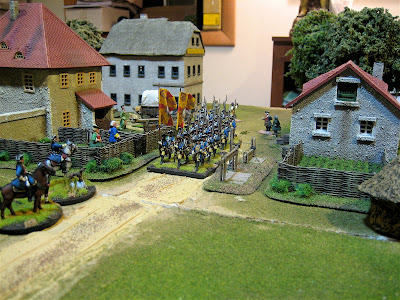 A closer view of IR5 as it marches through the town. The civilian figures are from the Front Rank 18th Century range, the Prussian infantry are Minden Miniatures, and the officers are RSM figures. All buildings and trees were made by Herb Gundt.

I really like the look and proportion of the larger trees that I have added to the tableau. They look more realistic, like mature trees that are as tall or taller than the buildings. This looks correct to my eye.

Now that the Chicago Blackhawks have won the NHL Stanley Cup, I will have more time to devote to painting and modeling as I build on and expand the behind the scenes aspect of my Minden Project. Next on the list: the Prussian field forge which I primed the other day.
Posted by Der Alte Fritz at 1:32 AM