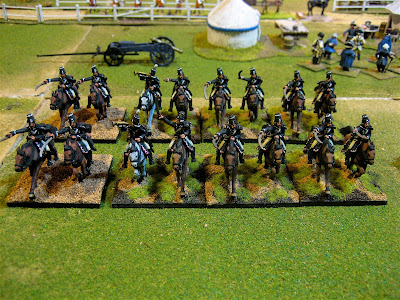 
I am beginning to think that I might have "cracked the code", so to speak, on quickly painting the Minden SYW Prussian hussar figures. I cranked out six of them on Sunday and managed to get the spackle compound applied to their bases. Meanwhile, the first dozen hussars that I had completed earlier in the week received their final application of static grass. Both sets are depicted above.

The hussars come with two different horse poses: legs bunched and legs stretched. I decided to place one of each horse type on my 2-figure stands to enhance the look of movement and motion. Think about Lady Butler's painting of the charge of the Scots Greys at Waterloo for an example of what I am trying to achieve. 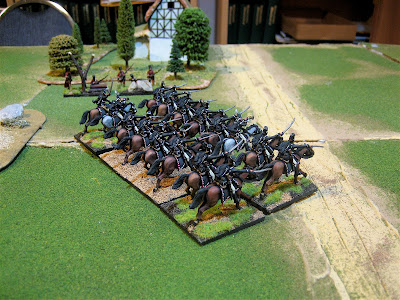 A view from the side and rear of the Black Hussars. Some Minden Croats cower in fear in the background.


The key to fast hussar painting is to select an easy unit to paint! Like black, what can be easier than that? Seriously though, after black priming, I apply a coat of acrylic black to cover the rough surface of the primer with a smoother coating of acrylic paint. This also serves the purpose of covering the little nooks and crannies that did not get a good coating of primer.

I decided not to paint the scharwarden and kit the hussars out in buff colored breeches, such as the ones shown in one of the Knoetel uniform plates. So I just painted the whole leg tan, save for the cavalry boots. The "van Dyke" pattern of the shabraque edging can be complicated and tedious to outline. However, it occured to me that I could simply paint each little triangle (they are engraved on the shabraque to make it easier for you) white. Then I come back and place a small dot of red in the center of each triangle. The end results appears that I have painted the triangle tooth of the van Dyking red, and then outlined it in white, but I didn't. If you have ever painted hussars before, then you will know what I mean. 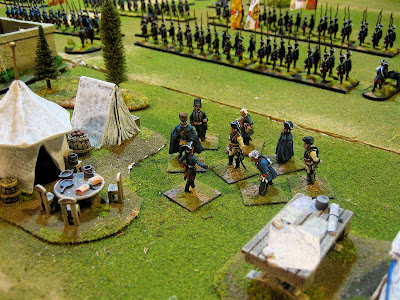 King Frederick and his generals all agree that the Black Hussars will make a wonderful addition to His Army. Various makes of figures including a Suren Fritz, Stadden Zeithen and Seydlitz, some Front Rank and Foundry lesser lights fill out the tableaux. Camp tents and furniture are from Herb Gundt of HG Walls.

I assembled the remaining dozen hussars that I need to bring the regiment up to 30 figures and plan on priming them this evening. Then I should be able to start the painting process all over again tomorrow night and get them finished by the weekend.
Posted by Der Alte Fritz at 7:44 PM