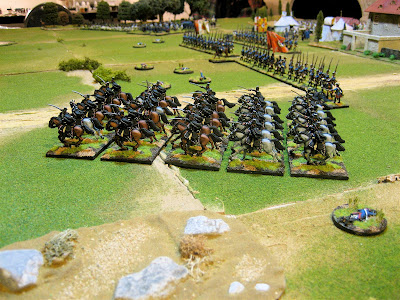 Five squadrons of Minden Black Hussars. Click pix to enlarge. Double click the pix to supersize the image. This is probably the best picture that I was able to take, in terms of proper lighting, focus and depth of field.


I cranked out another dozen of these bad boys over the weekend, working in groups of six hussars. I had a good start on friday evening and nearly completed the first six, but I stayed up into the wee hours of the next morning and as a result, got a late start on my Saturday painting.

I got a decent start on the second batch of six on Saturday night, blocking in most of the basic colors and getting all of the white trim and lace painted in. Once figures reach this stage, one can start to have fun with the figures as you add in the highlighting and details such as the eyes and buttons, etc. This is the fun part of painting figures. The unfun part for me is having to paint the horses. This is kind of tedious to me, but the Minden horses are so nicely sculpted that I almost forget about my aversion to painting horses. 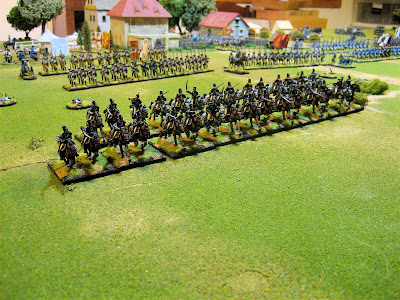 Here they are lined up in a 2 rank line, as they would probably appear on the tabletop. You can see an immediate problem with 30 figures based two per stand, if you use them in two ranks -- you have one leftover stand. Consequently, I will probably increase all of my cavalry units to 32 figures in order to fill in the last stand gap.

One problem with black figures is that they are hard to photograph. Everything looks dark, for good reason and I don't have proper lighting available in my game room, now that I am back on my smaller side of the basement. My daughter gets the larger side, which unfortunately, has overhead flourescent lighting, which would have been perfect for shooting pictures of the Black Hussars. Sigh... 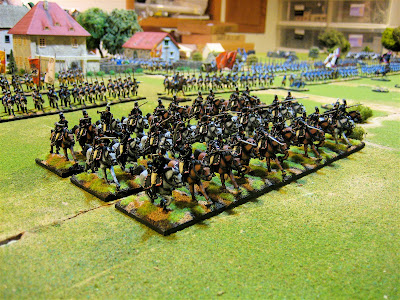 Hussars did not fight in three ranks, so this picture is posed merely to get all 30 figures into the camera frame. Notice how I have generally mixed the two different horse poses, legs bunched and legs stretched, to create a greater sense of movement and frenzy with the hussars.

I will probably add two more hussar to this regiment and bring it up from 30 figures to 32 figures in order to have two equal lines of 16 figures. I would have had to base them three per stand in order to make a 30 figure regiment fill out two full ranks. With 30 figures, you have one leftover stand of two figures that looks a little out of place. Of course, I could paint 10 squadrons as the HR5 von Reusch (Black Hussars) was one of the 10 squadron hussar regiments in the Prussian army. However, I think that I have had enough for now, nice as they are, I'd rather be painting foot figures because they are faster to paint.

I have to take a short diversion and paint a dozen Connoisseur Seaforth Highlanders to use in next weekend's colonial game at Bill Protz's house on Saturday. Since my Seaforths are taking semi permanent residence in Brown Deer and Fort Grant, I thought that I had better complete the last dozen figures and deliver them to Bill so that he can replace some of the casualties that the Seaforths have taken in the Tranjipour Campaing this year.

After painting Minden SYW figures for so long, I am not enjoying painting the Connoisseur colonials, but I feel that I must get these figures done and out of the way. There is nothing like a pending battle to concentrate one's mind.
Posted by Der Alte Fritz at 11:07 PM