Disaster in the Sudan! 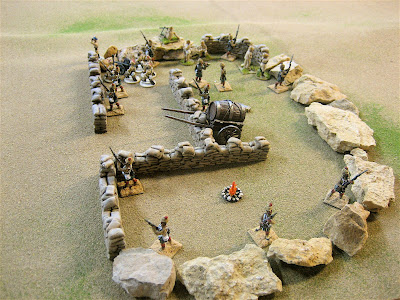 "A Company" 99th (Banffshire) Regiment of Foot man a lonely outpost in the Sudan. They await the changing of the guard in the morning as Colonel Alexander Erskine brings "B and C Companies" from the fort to relieve them.

On Saturday our group convened in Brown Deer, WI to fight a colonial battle in the Sudan between the Black Beja warriors of Osman Dinga plus reinforcements from some Arab tribesman. In all, they outnumbered the Imperial forces by about two to one. A company of Highlanders (the mythical 99th (Banffshire Highlanders) Regiment of Foot was manning an outpost on the perimeter of the British supply base at Jebil Obeid, on the Nile River. Colonel Alexander Erskine was accompanying two more companies of Highlanders that were going to relieve and replace "A Company". A squadron of the 10th Hussars accompanied Erskine and patroled in the direction of a ridge to the east of the redoubt. The supply base was garrisoned by the Royal Berkshires, the Bombay Pioneers, a regiment of Egyptian regulars and a regiment of Sudan regulars, plus assorted Imperial cavalry and some Royal Artillery batteries.

General Pettygree, commanding officer of the garrison, ordered Colonel Erskine to take two companies out to the redbout and return if any trouble was brewing. Pettygree promised to send out several reinforcing regiments if Erskine got caught up in serious trouble.

Our story, as told by The Guardian correspondent, Harry Pearson, follows below: 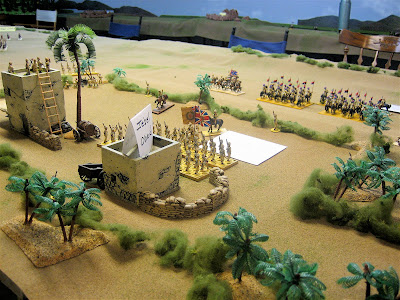 All is safe and quiet in the supply depot at Jebil Obeid, on the Nile. 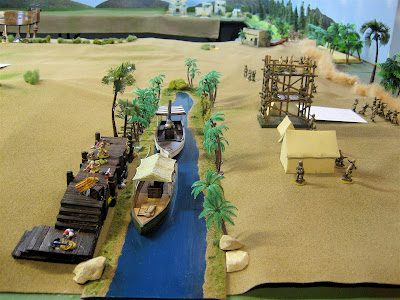 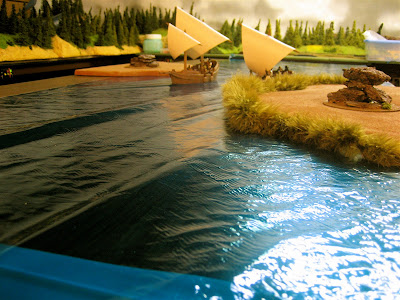 But Arab dowhs sneak up the Nile to attack the depot from the waterside. 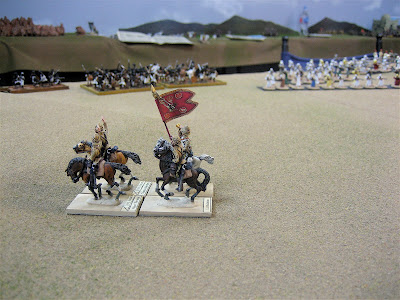 A hussar patrol under the command of Major Trevillian takes a morning ride to see what is over the other side of the ridge. Well, we have our suspicions about what they might find, don't we? I mean, it is like a horror movie, why does the beautiful girl always go down into the dark basement to see what that noise was? Why are the British hussars checking out the other side of the ridge? Well, we need a macguffin for this game, as Hitchcock would say. 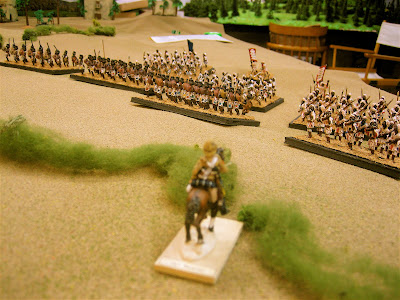 What the hussars saw on the other side of the ridge. Did you have any doubts? 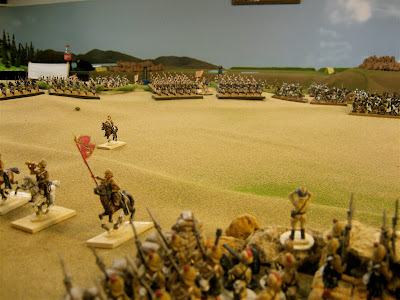 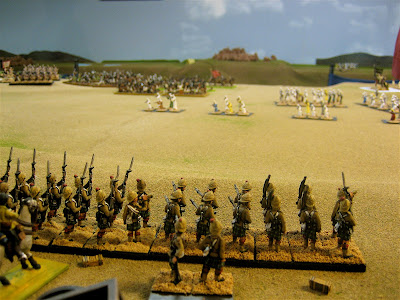 "Mark your targets men, aim low!" The replacement guard of Coys B and C quickly form line and prepare to open fire on the Beja and their Arab allies as they converge on the redoubt. 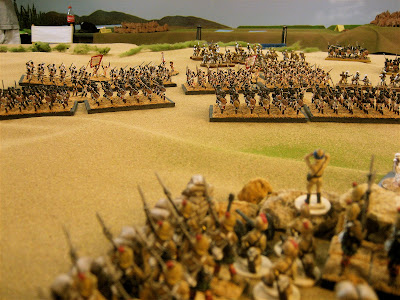 They are coming closer. Ulp! 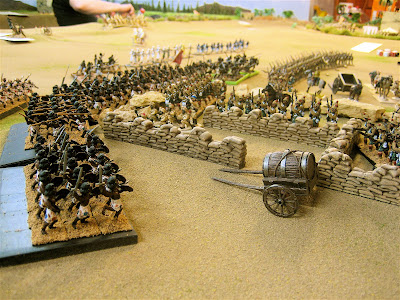 ...and now they are a bit too close as they rush the redoubt. The first ranks of the Banffshires have fallen back to the second line of mealie bags after several volley fires. In the background, you can barely make out a regiment of Sudanese regulars extending the Banffshires line to the right. 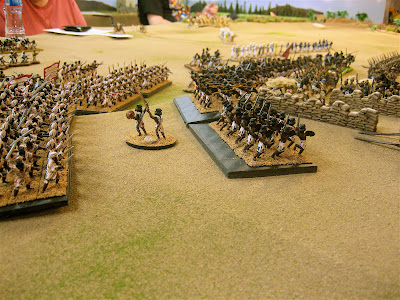 The first wave of Beja are thinned out a bit, but not enough to prevent them from charging into the redoubt. 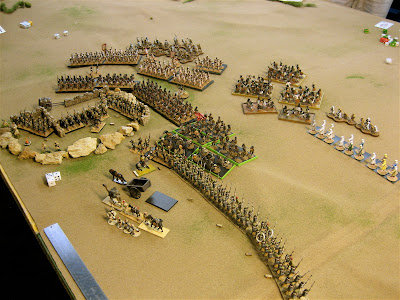 An aerial view of the action so far: two rubs of Beja converge on the redoubt while a third rub melees with Companies B & C outside of the redoubt. The Sudanese regulars provide some helpful fire support to the right of the Highlanders. Guardian correspondent, Harry Pearson, can be seen mounted on his horse observing the action by the supply cart. 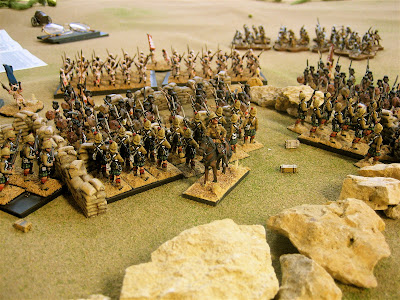 Colonel Alexander Erskine looks back toward the supply depot at Jebil Obeid, wondering where are those reinforcements that General Pettygree promised him. 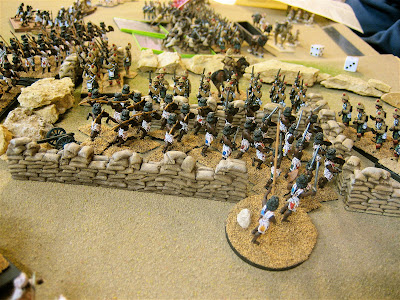 Desperate hand to hand fighting inside the redoubt. If only the Highlanders can win this one melee, then the routing warriors will disrupt the pile of Dervish reinforcements that are bunched up behind them. Colonel Erskine orders Correspondent Pearson to ride back to the fort and convey the bad news to General Pettygree. Pearson gladly obliges. 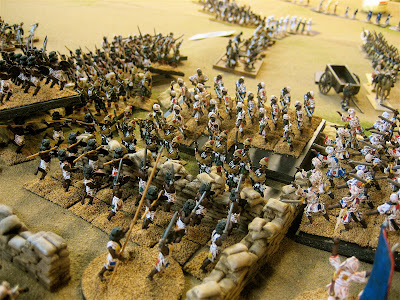 Alas, it was not to be. A and B companies make their last stand inside the redoubt, while most of C Company is cut down just outside the redoubt. The Sudanese repelled one rub of Fuzzies, but they made the rash decision to pursue them and they in turn were cut down by Arab reinforcements. The survivors fled back to the supply depot.

So three companies of the 99th Foot were wiped out in the redoubt and half of the Sudanese regiment perished as well. Colonel Erskine and three of his men were the only survivors of the Highland contingent in the battle. Erskine claims that he was trying to rally the Sudanese and found himself carried away in their route. I leave it to you, dear reader, to make your own judgement on our dear Colonel Erskine.
It is very clear to me though, that I need to place an order for about four Gardiner machine guns from Connoisseur Miniatures so that this does not happen again. Nevertheless, I had fun getting wiped out and a good time was had by all.
Posted by Der Alte Fritz at 1:18 AM