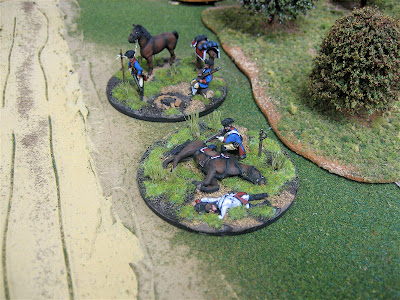 Reiter Christoph Steiner makes his last stand after losing his mount, determined to take a few Austrians with him. Minden Prussian jager painted as a Prussian dragoon, Minden generic casualty figure painted as an Austrian, Foundry or Perry dead horse, and RSM sword.
Here is another vignette that I added to my collection this weekend. This was was relatively easy to do and required only a minimum amount of conversion work. I already had the horse casualty (which comes from either Perry or Foundry - I forget which one) and the Minden generic casualty, and when I saw the dead horse figure, I immediately began to envision a dragoon firing his last rounds of ammunition from his carbine.

I used the Minden Prussian jager figure for the dragoon. The conversion work consisted of cutting off the cartridge box on the jager's belly and making a new dragoon cartridge box from epoxy putty. The belting was made from a spaghetti string of putty, which I placed over the shoulder and then flattened out with the eraser end of a pencil. The rectangular box was easy to fashion out of putty. I also cut off the hilt of the sword that the jager was wearing.

I envisioned Reiter Steiner being a bit ticked off over losing his horse, so he has unsheathed his sword and has jammed it into the ground in defiance. Then he crouches behind his dead mount and fires his last few rounds at the on-coming Austrians. You can see one of his victims, dead, in the foreground. Reiter Steiner intends to die hard and take as many Austrians down as he can before they finish him off. 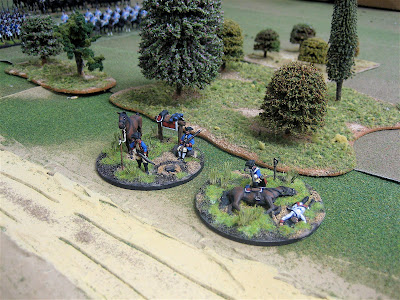 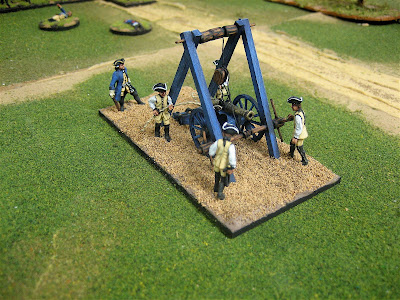 Prussian artillery crew removing a gun barrel from its carriage for some repair work. I will ink the gravel tomorrow morning, after the spackle terrain has dried, and then apply the static grass to complete the base.

I spent a good part of friday evening and saturday night constructing and painting the latest vignette addition to my artillery park. This is a vignette of the Prussian artillery crew using a hoist to remove the cannon barrel from the gun carriage for some type of repair work. Since a gun barrel could weigh anything from 700 pounds on up to 1,500 pounds, this was no easy task to remove the barrel. 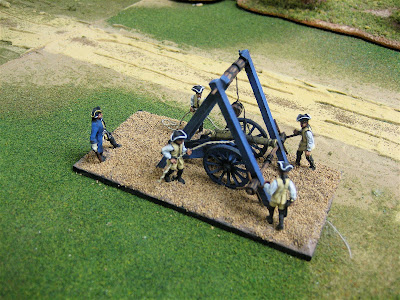 A side view of the vignette.

I will post some pictures of the completed artillery vignette tomorrow after I complete the base work. The spackle on the ground needs to dry for a couple of hours. After that, I will cover the ground with brown ink, leaving a few exposed areas of gravel un-inked, for contrast. Then, after a quick dry brushing of some tan paint, I will apply the final touch of the static grass and then the model will be ready for some "show and tell" photography.

This model was a bit fiddly to figure out and construct, but now that I have done one, it probably would not take me as much time to build another one. I will tell more of the construction story when I post the finished pictures tomorrow.
Posted by Der Alte Fritz at 11:26 PM