Prussian Artillery Is Finally Based 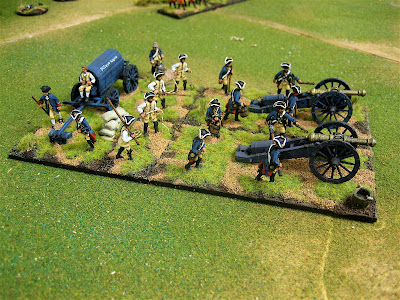 Two 12-pounders with four crew, two artillery labourers, and a supply wagon to complete the battery vignette when it is deployed. The limbers are not shown in this picture. Figures are Minden Miniatures, gun models are from Berlin Zinnfiguren, and the wagon is from Front Rank. Click the pix to enlarge the view.


Last evening I finally decided to place all of my field artillery models on a 60mm wide by 120mm deep base made from MDF material (rather than the narrower 40mm wide base), and having done that, it was time to finally get some of my Prussian artillery based. My initial thinking is that my foot batteries will have two gun models so as not to overpower everything on the field, but I could make the battery 3 or 4 guns, as show below. 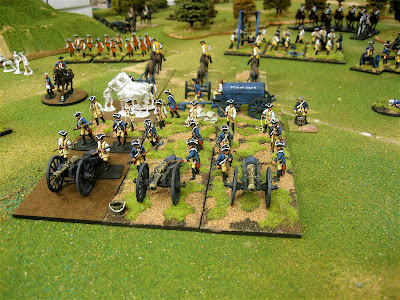 A mock up of a potential 3-gun battery. The extra 60mm frontage provides extra room at the back of the battery for a pair of wagon horses (detached while the wagon is unloading) and a horse holder. RSM limbers can be seen in the background, providing even more depth to the depiction of the battery and all of its accoutrements.

I kind of like the look of the three gun battery and the extra room available for some wagon horses. I may go this route as I get more figures and gun models painted. 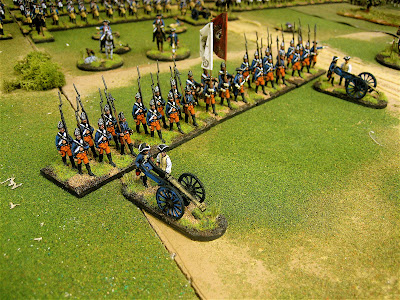 Here is a little vignette that I made showing two artillery crewmen prolonging a light 3-pound regimental gun by hand, in front of its parent battalion, as the latter moves foreward.

I got the idea for the regimental gun vignette from a picture of some similar models in John Ray's Fulda Campaign collection. I figured that these guns could be given to battalions forming the second line of battle. Afterall, they can't fire the guns because their own men in the first line of battle would be in the way. So they hand prolong the guns as the second line moves forward in support of the first. 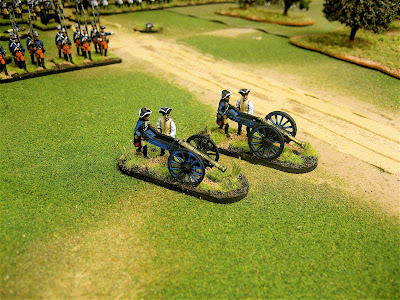 A closer view of the regimental gun vignette.

I used one of the Minden Prussian artillery crewmen and one of the generic pioneers in waistcoat to form the prolonging team. The battalion gun is an RSM 3-pounder (it is really a 20mm French Griveaval 12 pounder). There are no conversions in this vignette. I simply selected two figures that had hands positioned such that they appear to be carrying the gun trail. Then I glued the 3 pounder into their hands. I placed them on a semi round or oval base to indicate that it is a vignette rather than an integral part of the game. I could replace these guns with another stand of one gun in firing position, when the gun is ready and deployed for action.