Prussian Cavalry Is Next! 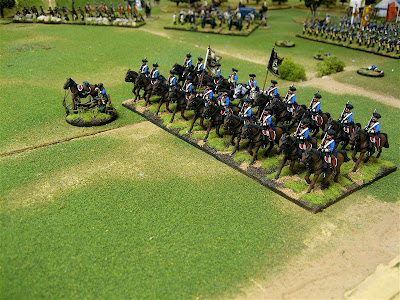 The Bayreuth Dragoons (DR5) practice on the marchfeld under the watchful eye of their colonel. Minden Miniatures painted by Der Alte Fritz. GMB Designs flags. Click the pix to enlarge the view.


I have been working on the Bayreuth Dragoons over the past week, having finished a second batch of eight riders and bringing the regiment (DR5 in the Prussian cavaly establishment) up to twenty figures. Eventually the regiment will have 30 to 36 figures in the first five squadrons. Curiously, the Bayreuth Dragoons were one of several regiments that were organized with ten squadrons, rather than the standard five squadrons. So at a 1:20 ratio of castings to real men, I will eventually need about 60 dragoons. Hmm, I could also use them in one of the BAR games that we play, as a 5 squadron regiment of 60 figures at 1:10. Even though these are mounted two horse per base, rather than on single stands, the frontage for both set ups is the same at a one inch frontage. 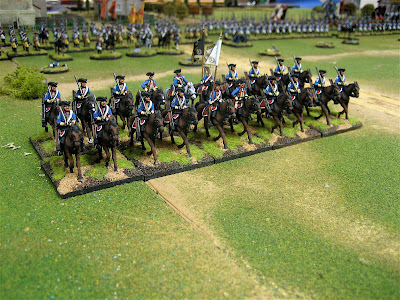 A view of the dragoons from another angle.

And now, here is a picture of what many of you are looking forward to seeing: the Minden Prussian hussars in mirliton. I ordered a 36 figure regiment from Frank last week and received them in record time a couple of days ago. 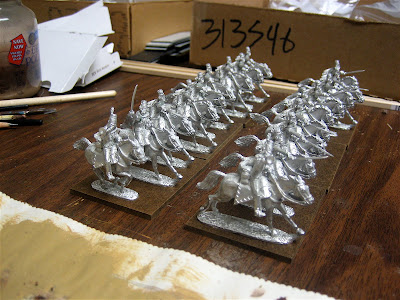 Minden Prussian Hussars in Mirlitons await for the glue and epoxy putty to dry before advancing to the priming booth.

The Minden hussars are sculpted in a more animated pose than their heavy cuirassier and dragoon bretheren, and this seems apt and fitting for these wild and daring light cavalrymen. As a result, there are two new horse poses added to the range: one galloping horse with legs stretched out and one galloping with legs bunched. They ought to convey rapid movement when they are mixed together on a stand, one bunched and one stretched.

The sword arm is cast separately, but do not let this dissuade you from buying some of these beauties. Frank had Richard Ansell design them with a deep hole in the arm socket and a long cast on pin on the sword arm. You will not have to drill out any holes or add you own pins to the arm for fear of it (the pin) being too short. You will find that arm and socket provide a strong and comfortable fit that require minimal assembly.

I took a quick swipe across the torso with a flat file to expose more metal, for a better glue bond, and then did the same around the pin in the arm. Then I inserted a small ball of green epoxy putty into the arm socket for extra support, added super glue, and inserted the arm into the torso. It was as easy as pie to do. I would imagine that you could forego the extra step of using green stuff, but then again, I like to over engineer things a bit too much. Adding putty only adds another minute, if not seconds, to the assembly process.

I will let the figures dry and cure overnight and then prime them friday night. Thus, I will have 18 figures ready for painting over this weekend. Since it is Memorial Day weekend in the United States, I have a holiday on monday and thus some extra time to paint over the weekend. Hopefully, I can complete a half dozen or so of these hussars. Since I plan to paint them as HR5 von Reusch (the Black Hussars), the painting should go faster for this regiment.

One other thing to mention, Richard Ansell sculpted a lot of nice detail into the shabraque with raised lines depicting the "Van Dyke" style of edging on the shabraque. This should make the painting of the shabraque very easy to do. 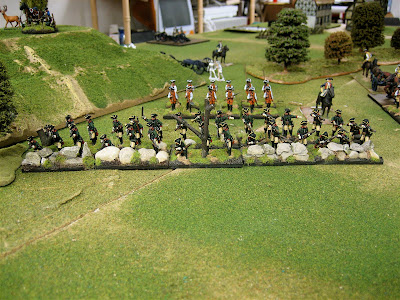 I finished six more jagers this week, bringing the regiment up to 30 figures.

Finally, I painted six more jagers last weekend and finally had a chance to complete the basing the other day. The last two stands are seen on the front row, on the left of the unit as it faces you. I wanted to add a couple more stands with the rock wall motif so that I could create a standing vignette of jagers firing from behind a low stone wall. The frontage of the stand is the same as that of my regular infantry battalions -- 60mm per stand-- the extra depth in the stand gives the appearance of a more open order deployment of the jagers, as opposed to the more formal look of the infantry stands.

Well then, I am looking forward to painting some of the hussars over the holiday weekend and hopefully I will have some "work in progress" photos to post on Monday evening.
Posted by Der Alte Fritz at 11:35 PM