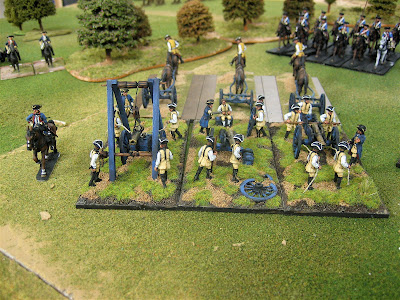 A front view of all three artillery park vignettes after completing the static grass phase of the basing process. On the left, a Minden Prussian dragoon officer has been converted into an infantry officer. All I did was file off the aigulette on his right shoulder. He is slightly different from the mounted colonel in that his right arm is bent and his hand is in a jaunty pose, resting on his hip.

I completed the final phase of the artillery hoist vignette that you saw yesterday. All that I had to do was to affix the static grass onto the base with Elmer's White Glue (pva glue in the UK) and then it was ready for its photoshoot. In the picture above, you can see how all three artillery vignettes fit together and complement one another. 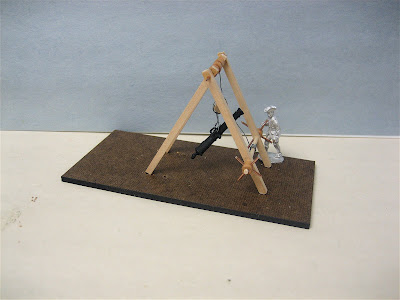 A view of the model during its construction.

In the picture above, you can see the hoist frame during its construction phase. The legs are made from bass wood (1/8 inch square) cut to 2.5 inches in length. A spare offcut from a North Star flag pole was used to provide the connecting rod at the top of the A-frame and similar pieces were used to make the turning handles on the lower axle. The lower axle is a piece of dowel rod. I used wooden bead sleeves to act as a sort of washer at the ends of the lower axle. Since these were made from wood, it was easy to drill four holes in the bead to accomodate the turning handles. Florists' wire was used for the rope on the block and tackle suspended from the top of the hoist. 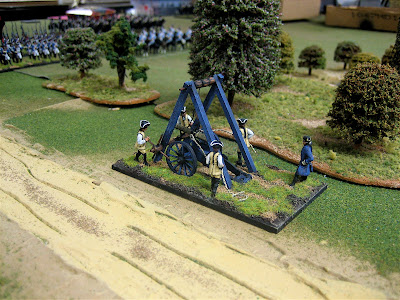 Left side view of the hoist vignette. The officer in the blue coat is from RSM. I clipped off the lapels on the figure since Prussian artillerists did not wear lapels. Note the coiled rope on the ground running from the hand of the labourer in the foreground. The rope was made by twisting two pieces of florists' wire together. 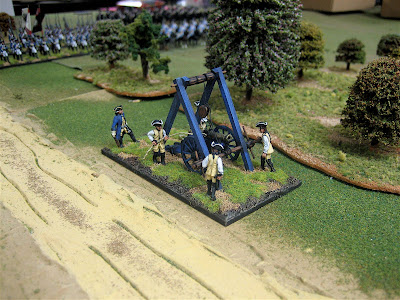 The view of the front of the model. 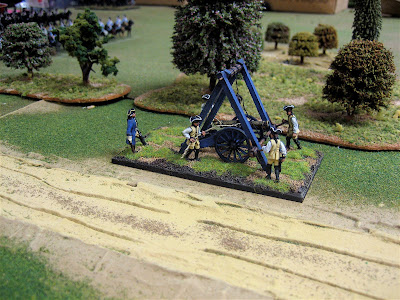 A view of the right hand side of the vignette. 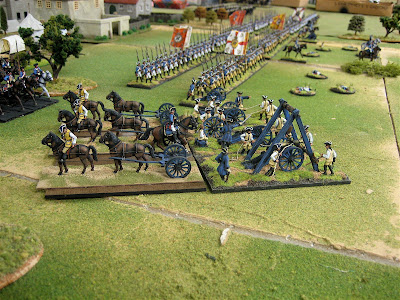 Another view of the complete artillery park and a long view of how it fits with the rest of the Minden Miniatures Prussian army. Supply wagons are now in the painting que.

The will be it for the vignettes for the rest of this week, unless something strikes my fancy and I embark on some new project that catches my eye. I was working on the second battalion of Itzenplitz (IR13) this evening and I want to finish it this week. So after Itzenplitz is completed, I may work on some more vignettes. I am almost out of Minden labourer figures to use in these projects, but never fear, a new package of inventory is winging its way across the ocean, even as you read this post.


By the way, I am very close to surpassing my 200,000th visitor and we should pass that milestone sometime this week. Click on the little Sitemeter logo at the bottom of this page to see how many visitors have passed through. You can also click on the map inside Sitemeter to see where other readers of this blog come from. It's kind of a cool thing to see.

Oh, and keep the comments coming -- I love to read the feedback. There is no telling what might come next as I build on and expand this wonderful Minden Project.

Update
A big fat box of miniatures arrived this evening chock full of Minden figures including Prussian fusiliers, Austrian grenadiers and labourers for vignettes. I've got my work cut out for me now. Kudos to Frank on the super fast service. I am looking at some of the Prussian fusilier NCOs and I see pioneers holding their tools in their hands. I was going to lop off heads and do some swaps, but the NCO figure for the fusiliers is a ready made pioneer in mitre hat.

Update II - Monday Night
This evening, after watching the Blackhawks vs. Canucks Stanley Cup Hockey game, I went down to the basement and started converting the Prussian jager standing firing into an officer holding a telescope.

I cut out the rifle and kept the left arm and hand that held the rifle. This would eventually hold the telescope. Then I had to amputate his right arm at the shoulder - I tried but I couldn't save it and use it by bending the arm into position. I measured out the length of the old arm at about 11-12mm and cut a piece of wire the same length.

Then, after drilling a hole in the shoulder socket, I glued the wire armature into the shoulder and started applying green epoxy putty to form the arm. The hand is much better on this model. I seemed to learn a thing or two from my last arm conversion. Then, as an afterthought, I decided to remove the jager belly box and turn the figure into a dragoon instead of a jager officer. So I filed away the belly box and covered up the scratchings with a new officer's sash around the waist. It looks fairly decent. The telescope was just a piece of brass with some putty building up the end of the spyglass.

Then I got really crazy and decided to make a dragoon shabraque and saddle set for a standing RSM horse. The idea is that this will be the officer's horse as he will be dismounted. I may add a horse holder to the stand using one of the existing Minden generic horse holders, or I could just have the horse and the officer on the vignette stand. I will decide on that later.

It will probably take a couple days for the epoxy putty to cure, so I will prime the figures on Wednesday and start painting on Thursday, if all goes well. Preliminary basing on Friday and then I can finish off the base and shoot some pictures on Saturday May 8th. Stay tuned for that.