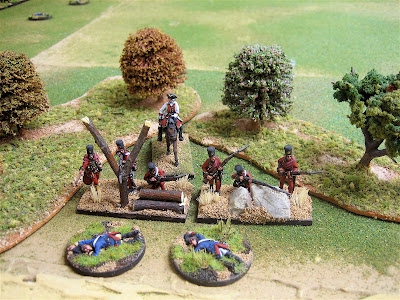 Minden SYW Croats "in situ" where they are most likely to be found: in cover.


I started on my Austrian army today by painting six Minden Croats from the Ottokaner Liccaner regiment. I had been painting the Prussian hussars and getting a little bit bleary eyed painting the shabraque Van Dyking, so I thought that I would take a short break and paint one Minden Croat. It was the fellow standing firing and I liked him so much, that I painted the officer with the cane and the kneeling loading fellow as well. That was enough for one stand, but wouldn't two stands look even better? Well, yes - so now I have six Croats in my Austrian army. 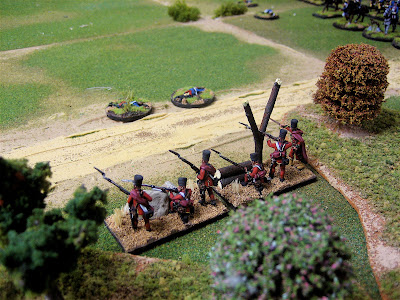 A view of the Minden Croats from the rear - click the pix to enlarge the view. 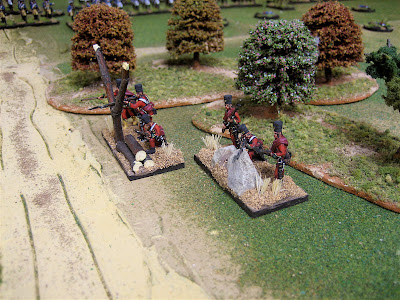 A side view of the Croats so that you can see the fellow behind the tree. 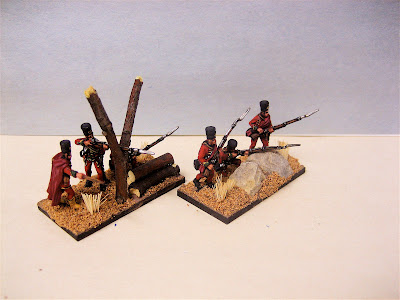 A close up view of the Croats.

I plan to return to the Black Hussars tomorrow, now that I've sort of gotten the Croat bug out of my system. However, I am really looking forward to finishing this battalion with 30 figures.


As for painting, I used a grey primer this time because the uniforms are predominantly red, and red doesn't cover black primer very easily. Once the figures were primed, I slapped on a coat of Reaper Paints "Blood Red" for the uniform color. Then I blocked in all of the equipment with black paint as this makes things like muskets and cross belts stand out better. This takes a little longer than if I had black primed everything, but then I would have needed two or three coats of red to cover the black.


Thankfully, Richard Ansell has strategically covered over most of the frogging and detail on these Croats with careful placement of things like the rolled up cape or the arm position and the musket, etc. Thus you don't have to paint much of the frogging at all. This is terrific! For the little frogging that you do paint, I black lined the areas first and then carefully painted a thin line of Dun Yellow from IWM/Ral Partha to finish off the figure.

All in all, these Croats are very dynamic and animated and are a simple joy to paint. I had always steered clear of painting Croats in the past, thinking that they would be hard to paint. But with these Minden figures, the details are a snap to paint. I give the figures my highest recommendation.
Posted by Der Alte Fritz at 10:02 PM