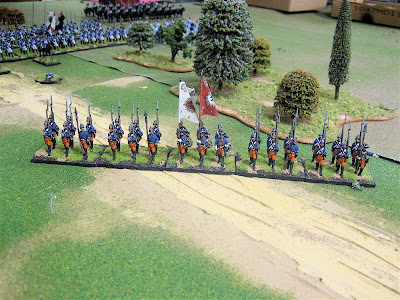 
I finished my first battalion of Minden SYW Prussian fusiliers late friday evening and finally finished the basing and the flaging of the unit yesterday. For my first fusilier regiment, I decided to paint IR49 von Diericke for the sole reason that I like the regiment's unique orange breeches and waistcoat. Add to that that GMB Designs makes a very cool looking set of flags for this regiment, and the choice to paint IR49 was an easy one to make, to say the least. 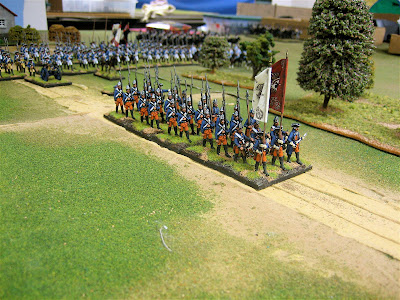 IR49 shown in a column, providing a closer look at those nice GMB Designs flags.


Originally, I was contemplating only having one battalion of fusiliers, or possibly painting only one battalion of IR49 and one battalion of IR40 (in pink small clothes for added color) to maximize the color variations in my SYW Prussian army. However, I really like the way that this battalion turned out. The orange is very striking and is also very different from the standard white or straw small clothes worn by most regiments. Undoubtedly, I will have to order some more figures and paint the second battalion of the regiment. I always say that a good plan can still be adjusted in mid-course, and so I will have a full regiment of IR49 fusiliers in my Prussian army. 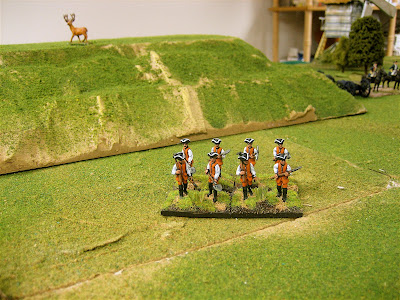 
I have been using the Minden generic labourers as everything but pioneers, so I finally decided to paint a few of them as what they were meant to be - pioneers. I placed two figures on each stand 40mm by 30mm. I will paint at least 12 figures as pioneers and eventually increase the unit up to 20 or 24 figures. These can be used for digging field entrenchments, seige works or as for use as a pontoon corps to go with my Berlin Zinnfiguren pontoon wagons. They make a nice complement to my growing artillery park and technical corps.

Within the next couple of days I will post some pictures of an artillery battery with its full complement of crew, matrosses and supply wagons. I have been going back and forth in my mind about the size the bases to use. My original idea was to use 40mm wide bases, but after looking at the artillery vignettes on their 60mm wide bases, I have grown to like and appreciate the wider bases.
Posted by Der Alte Fritz at 3:56 PM