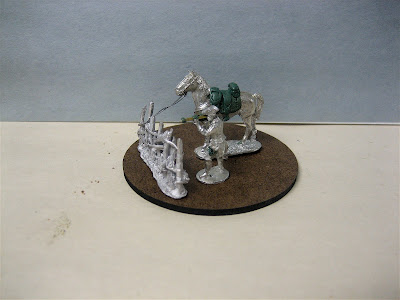 I have been looking at the Minden Prussian jager standing firing and have decided that he would be a suitable candidate for a conversion project. I envisioned cutting out the jager's rifle and substituting a spyglass or telescope and turning him into a dragoon officer on recon.

The jager/dragoon conversion was fairly simple to do. At first, I tried to just cut out the rifle and use both arms/hands. Sometimes you can make a good conversion by simply bending arms and heads and doing some minor cutting under the arm pit or at the elbows. But in this case, it was apparent to me that the bend in the right arm would be unnatural. So I decided on an amputation.

Once I sawed off the right arm, I filed the stub flat and then drilled a hole in the shoulder socket. Here I cut off a pin to 12mm, the same length as the now discarded arm, and glued it into the hole. Once the glue dried, then I applied a sausage roll of green epoxy putty and shaped the arm until it looked about right. Then a small flat piece of putty was rolled out to create the cuff of the gauntlet and the right hand. This worked out much better than the hand conversion that I attempted on Marshal Schwerin last week. 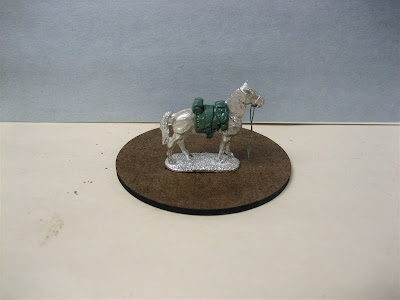 I used the standing horse from the RSM range to create a saddled horse that I could use in the vignette. I filed off the reins and drilled a hole into the muzzle so that I could replace the reins with wire reins for a more realistic look. Since the horse comes without a saddle (I wish that someone would make saddles with shabraque accessories for the 18th century to use on this type of project) I had to make my own shabraque and saddle out of green stuff. I'm not entirely happy with the result of the horse furniture -- it looks a little lumpy and lacks sharp definition, but it will probably look all right after it is painted. I could have used one of the Mirliton saddles, but I didn't have any left. That would be a better choice if I want to do a line of four or five horses tied to a hitching post. 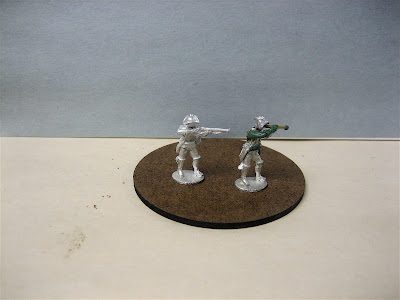 A view of the original jager figure (left) and the conversion figure (right) for comparison.

I finished the sculpting last night around midnight so I am going to let it cure all day tuesday, before priming the figures on Wednesday night and then painting them on Thursday.

I am still deciding whether I should use one of the Minden horse holder figures to hold the officer's horse, or dispense with the extra foot figure and tie the reins to the Irregular rustic fence. Or, I could add one of the RSM officers pointing and perhaps directing the attention of the dragoon with the spyglass to something that he has spotted.
Posted by Der Alte Fritz at 11:35 PM