The Prussian Army, So Far 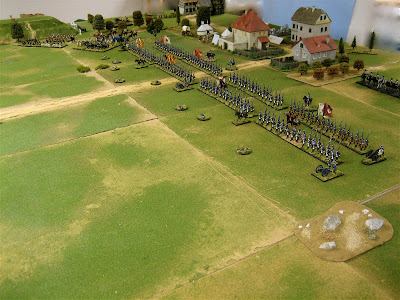 The entire Minden Project Prussian army is on the parade ground for a review. Please click on the picture for a closer inspection of the troops. And do leave a comment with Der Alte Fritz if any particular unit deserves special mention, or conversely, has failed its inspection.


Last evening I decided to lay out more of my terrain squares on the wargame table and see how my Minden Prussian army would look on a 6ft by 10ft table. As of now, I have eight battalions of line infantry, 1 battalion of jagers, 3 heavy 12-pounder foot artillery pieces, and 4 light 3-pounder regimental guns. I only have a dozen Bayreuth Dragoons so far because I have concentrated on the artillery and infantry combat arms, so far this year. 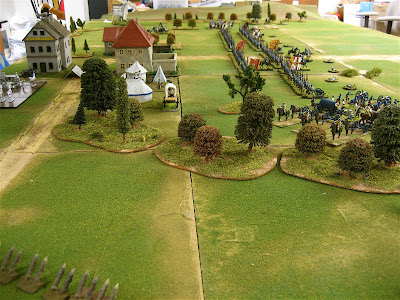 A view of the Prussian right flank and the camp ground area behind the lines. On the left, you can just see the start of the field forge vignette (unpainted castings so far). Eventually, I will have a full camp area with tents, men at their ease, sutlers and camp followers, etc.

One of the benefits of this exercise is that it enables me to see how the whole project is coming together; to get a better idea of how well the various pieces fit together; provides an idea of what else needs to be done (cavalry!); and finally, it is simply mesmerizing to look at, which makes the whole exercise fun.

One of the things that really jumps out at me is that this army, as it is constituted right now, takes up most of the tabletop space. If I add another two foot square tile to the left flank, that will give me 12 feet of table length and provides a moderate amount of "open flank area" on the left for maneuvering and cavalry action. If I removed the temporary hill on the right flank, which serves primarily as a photo background, then that would give me two feet of open area on that flank as well. To put it another way, I don't think that I need any more Prussian battalions for a typical game on 6ft by 12ft table, which would be my standard table dimension for this army and project. 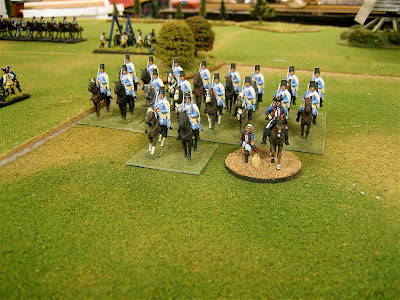 Here are some RSM Prussian hussars (HR4 Puttkamer) that are shown next to a Minden Prussian officer (a dragoon officer converted to an infantry officer) with an RSM aide on foot. This demonstrates how compatible the two ranges are. The hussars were painted over 20 years ago by Bill Biles of Lexington, Kentucky (one of the original owners of RSM Miniatures).

I plan to rebase these figures in my new style of basing, and that should improve the overall appearance of the figures. Note the difference in painting styles between the hussars from 1990 (which was state of the art painting at the time) to the Minden command stand that I painted. We did not use much shading, highlighting or multi-tone coloring on our figures back in 1990. Bill hand painted the intricate hussar shabraques using a dark blue ink pen.

Now of course I won't stop painting my beloved Prussians. In fact I recently placed an order for figures to fill out the second battalion of the IR49 Diericke Fusliers, another grenadier battalion, and a regiment of the new Prussian hussars that Frank announced (today) as being available for shipments. I will probably have three or four Prussian cavalry regiments in this army. However, a typical game looks like it should have no more than nine battalions, unless the other three of the dozen that I have planned for each side are used as off board reserves that arrive later in the game.

Or to put it another way, perhaps it is time to start painting Austrians. I hate to say that, but this is true. 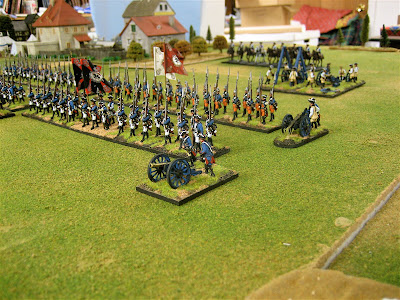 A parting shot of the Prussian left flank with the Itzenplitz regiment (IR13) in front with its battalion gun deployed. In the second line, you can see IR49 Diericke Fusiliers and their battalion gun being prolonged by hand. I really like this picture with the close up of the two battle lines and the deployed and prolonged battalion guns. I think that more wargamers should add things like battalion guns and limbers to their SYW armies.

I currently have more DR5 Bayreuth Dragoons on the painting table. I finished the first dozen a month or two ago and have a second group of eight partially painted. Another ten dragoons need to be primed and ready for painting. With Memorial Day weekend coming up soon (May 31st) I hope to be able to finish the dragoons this month and then possibly start on some Austrian infantry in June.
Posted by Der Alte Fritz at 11:54 PM